If architectural trends reflect the consciousness of the times, we’re entering an era of heightened ecological sensitivity 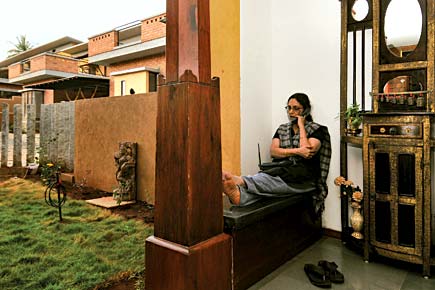 If architectural trends reflect the consciousness of the times, we’re entering an era of heightened ecological sensitivity


As you step into artist Vishakha Chanchani’s house in Kengeri on the outskirts of Bengaluru, it feels as if you have retreated from the noisy urban milieu into a verdant paradise. Part of the Good Earth Enclave, hers is one of several green houses in this ecologically sustainable commune. Terracotta tiles line the floor, while recycled wooden doors form an integral part of the house’s design.

When Vishakha moved into the house a couple of years ago, she was sure that she wanted only local materials to be used in their natural form and texture. She is just one of many across the country who are gradually making a shift from conventional housing to the emerging option of green architecture.

“Being an artist, I understand the value of organic materials and our age-old methods of design,” says Vishakha, “In the present scenario, there is a need to be ecologically relevant and I wanted my house to be precisely that.”

Heightened awareness of global warming is finally finding expression in ecologically sustainable architecture in the country. Recent years have seen one alarming study after another pointing a finger at India’s fast-expanding real estate sector as a prime contributor to the problem. One such survey by real estate consultancy Jones Lang LaSalle Meghraj reveals that the current design of buildings not only leads to emission of greenhouse gases, but also accounts for an outsized share—20 per cent—of the country’s electricity, thus putting extra pressure on scarce energy resources.

It is reports like these that have stirred architects and builders alike into action. It has also thrown up a new generation of eco-sensitive designers who make energy efficiency a primary objective of their work. There have, of course, been luminaries in the past like Laurie Baker who pursued the green cause with great zeal by using materials that were available locally and by recycling waste. However, efforts like Baker’s were few and far between, really, and it is only lately that green architecture has begun to resemble a movement that could define the future.

It’s actually a five-year trend, points out architect Sanjay Prakash. “The construction sector has now realised that it needs to play a responsible role towards conserving the environment,” he says. And this shift in attitude has already begun to show in the changing urbanscape.

According to estimates provided by the CII Sohrabjee Godrej Green Building Centre in Hyderabad, four years ago a modest 20,000 sq ft of green building space was under construction, but today more than 300 green buildings, totalling a built-up area of over 230 million sq ft, are being built all over the country.

Though green commercial projects outnumber residential complexes in terms of area, real estate watchers expect eco-sensitivity to gain such household force that it will change our idea of ‘home’ before long. To encourage the revolution, Indian Green Building Council (IGBC) has even come up with the IGBC Green Homes Rating System exclusively for the residential sector. About 76 residential projects, accounting for 90.5 million sq ft of built up area, have already been registered for rating.

There was a time that installing a rainwater harvesting system in the house or growing thick foliage around the building was enough to claim green credentials. Now, waste management and eco-friendly materials such as fly ash, recycled wood and green roofing products are considered par for the course.

Leading the pack is Good Earth, a community of about 100 architects that came together in 1994 to put idealism to blueprint. “We believe that the world needs an enormous number of new innovators, change agents and transformers, all dedicated to turning development in the direction of sustainability,” says Jeeth Iype, one of the first members. Inspired by the work and philosophy of Laurie Baker, this talented bunch of architects has completed 11 community housing projects in places like Kochi, Calicut and Kottayam, and is at present designing an eco-village.

Vishakha, whose house was designed by the community, is all praise for the group’s efforts. “Their commitment to the field of green architecture is commendable. I have now realised that basic techniques like using choona (slaked lime) instead of distemper and avoiding the use of marble can make so much of a difference to a building,” she elaborates.

One of the many myths associated with sustainable architecture is that one needs to cut down on basic comfort in the bid to go green. Builders are trying to do away with this notion by keeping comfort levels as high as any would expect. It can be done, they say.

A visit to Bengaluru’s TZED homes (ZED stands for Zero Energy Development) would help put things in perspective. This complex of 95 homes is being developed by the Biodiversity Conservation India Ltd (BCIL), a company that is engaged in designing alternate technologies and developing eco-friendly homes. The objective is to build a campus for a self-reliant community, with water and energy autonomy to go with solid waste and water management processes that do the planet no harm. “The project has reduced carbon dioxide emissions by around 20,000 tonnes just through the choice of materials used,” says Arvind Srinivasan of BCIL, “For instance, we have used exposed soil stabilised blocks and laterite blocks for external walls. Gypsum plaster has been used in place of cement plaster. Rubber wood panelled doors and teak wood main doors have also been put in place. These measures have really made a substantial difference.”

Similar features can be found in Rabi Rashmi Abasan, India’s first completely solar powered housing complex, which is being developed by West Bengal Renewable Energy Development Agency and Bengal Development Consultants Pvt Ltd in Kolkata. This 58 kW project has been developed on 1.76 acres of land and includes both active and passive solar energy features. While the active features include a solar water heating system, solar street lights and much else, the passive features ensure that the houses remain cool during summer, get natural light and have good air circulation. It is not just builders who are adding to the green built-up space in the country. There are commendable individual efforts as well. Take architect Revathi Kamath’s house, for instance. Kamath, who is considered a pioneer of sorts in green architecture, has ensured that not a single resource is wasted in her house.

The lovely mud structure, located in Anangpur village on the outskirts of Delhi, stands on what was once a quarry. She allowed the nearly ravaged topsoil to rejuvenate on its own, yielding an exquisite ecosystem around the house. With a sewage disposal system and all the arrangements for rainwater harvesting firmly in place, and a solar cooker to take care of all food needs, it’s no surprise that Kamath’s eco-friendly house is a zero carbon rating building.

“Since the house is made of mud,” she says, “people think that it is a high-maintenance house. That’s not true at all—the only cost we have is to sustain labour. But even through that, we generate employment for people around here. As for the house, I just need take a sponge and rub the walls. At times, we rub a turmeric and sandalwood paste on the walls. This way, I can make do without toxic paints, and sandalwood also keeps the house cool.”

A green house is a win-win house. Not only are resources relieved of undue pressure, individuals too save on money by cutting down on maintenance and energy bills.

According to a note on the green building movement by CII, energy savings from green buildings could range from 25 to 40 per cent, depending on the extent of green specifications. “Other tangible savings would be reduction in first costs and enhanced asset value. Intangible benefits of green buildings would include increasing productivity, occupants’ improved health, safety benefits and a green corporate image,” says Varalakshmi.

Moreover, there are credits to be earned through various rating systems like Leadership in Energy and Environmental Design (LEED) that can actually be traded in the carbon market. “For instance, every resident gains Rs 12,000 on an annual basis, thanks to carbon credits savings in TZED homes,” says Srinivasan.

How difficult is all this to achieve? Ask Amit Chandra, a senior executive with Bank of America and the proud owner of a green house in Palam Vihar, New Delhi. He reports huge savings on energy bills. The most striking aspect of his house is a central atrium that goes all the way down to the basement. This atrium allows natural light into the basement and allows for cross ventilation as well.

“The atrium has a sun roof on a truss made of wood and covered with an aluminium sheet. While the verticals made of glass and wire mesh allow light and fresh air to filter in, the wood acts as an insulator and the aluminium sheet reflects light and cuts out the heat. In winter, we remove the horizontal sections to allow the sunlight to filter in,” explains Chandra.

In summer, thanks to these green features, he bears just about one-third of the airconditioning cost that he would have had to otherwise. In winter, the thermal insulation system keeps the house warm enough for him to make do with just a light Jaipuri razai.

“Though the initial capital cost was high,” he says, “the thermal-insulation system paid for itself by cutting energy bills over the next two years. We don’t need to put the lights on in the day and the basement, which acts as my study, is bright and airy all day.”

If you thought going green is complicated, think again. Often enough, simple innovations and wise choice of materials make all the difference. As Sanjay Prakash says, “I use tradition in a modern, even futuristic, way and modern technology in a simple old-fashioned way. People must realise that there is much we can do with innovation through simple, logical and unpretentious choices. That is a natural way to design.” Indeed. Natural. But above all, fresh.