A love of all things celestial unites Delhi’s stargazers 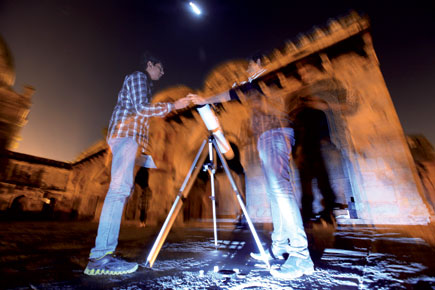 A love of all things celestial unites Delhi’s stargazers


Holed up in his flat in Delhi’s Gole Market, Vibhu Narayan looks at the sky and literally thanks his stars. The December sky is heavy with clouds, and there’s rain forecast at night. The 15-year-old school student has checked twice—once in the papers and then on the internet. Clouds are set to take over the night.

A ‘star party’ is scheduled tonight, one that Narayan was preparing all year for, ever since he saw December 2011’s Geminid meteor shower. Tonight’s show was expected to be just as spectacular.

But this time, he has a Spanish exam the next morning and is glad that the party he’s missing won’t happen at all, thanks to the weather. “I am good at Spanish, but I’d have had to stay up till at least 4 am if it had happened. The party is on the outskirts of Delhi,” he says, looking at the grey sky.

The Geminid meteor shower was to be best visible at around 2 am. “There would have been bigger telescopes,” says Narayan, “and I could have shown [off] my recent discoveries in the sky at the party.” If it hadn’t been for the weather, nearly a hundred stargazers would have assembled near Manesar to watch the shooting star shower known to be a result of debris cast off by an asteroid-like celestial object called 3200 Phaeton. “It is a spectacle you see only once a year,” says Narayan.

Narayan lives in a government flat in a cluttered part of the city that’s often smothered by smog. For his hobby, he has neither a terrace nor an inky clear sky to count on. “Nothing frustrates an astronomer more than a cloudy sky, or worse, city lights and pollution,” he says, “The best bet is to gather for a star party on someone’s terrace in Noida or Gurgaon or further out on the outskirts. Of course, I have to manage my school schedule and parents too.”

“As a concept, star parties are nearly 10 years old,” says CB Devgun, who is among the founders of Astronomica, a space lovers’ club that organises these get-togethers. An educationist, Devgun is also a director of the Science Popularisation Association of Communicators and Educators (Space), which has been conducting workshops for students interested in astronomy for over 20 years. “We would have workshops and training modules and then organise night meets for students to see space objects with the equipment we have,” he says. These night meets, usually held on school campuses in faraway locations where the sky is clear, came to be called ‘star parties’.

Astronomica was formed only in 2005, as Devgun and his colleagues at Space realised that students interested in astronomy had no avenue other than workshops and school classes to explore their passion. “We decided to start Astronomica for young amateur astronomers who were keen to pursue the hobby beyond the lessons given in school,” says Devgun, himself a mechanical engineer who stumbled into astronomy in 1986 when Halley’s Comet appeared in the sky for its once-in-76-years loop past planet earth. “I was in college in Delhi, and there was this buzz around the whole thing,” he says, “That’s when I discovered Delhi’s Nehru Planetarium.”

It was around then that Devgun met Sachin Bhamba, a co-founder of Space as well as Astronomica. And what was an individual pursuit became a group obsession. “Astronomy is a hobby that thrives on exchange of information,” says Devgun, “You may be sitting with the most expensive telescope on your terrace, but you will also crave the excitement of exchanging notes, equipment and just discussing astronomy [with others] in general. More sightings lead to more discoveries and vice-versa. It is important to be in a group.”

Akshay Gupta, a member of Astronomica and keen star party organiser, endorses that view wholeheartedly. “The gathering is open only to members,” he says, of these parties. While most members are school and college students, membership is open to anyone who is interested in astronomy, says Devgun, on an annual membership fee of Rs 800, which gets the new sign-on a basic telescope to begin with.

Apart from star parties, Astronomica runs an assortment of other projects with amateurs, mainly students, and claims several discoveries that could make professional astronomers proud. Of late, for instance, four members of the club—engineering students Sahil Wadhwa and Akshay Gupta along with school students Shubham Sharma and Mayank Sharma—have been credited with spotting two new asteroids.

The discoveries were made as part of last year’s All Indian Asteroid Search Campaign, a four-month programme conducted jointly by Space in alliance with International Astronomical Search Collaboration, a US-based outreach initiative aimed at granting school and college students hands-on experience in astronomy and other space-related activities. According to Devgun, the four students worked in two teams and used exclusive data to look at specific parts of the sky and made their breakthrough via a complex procedure called ‘Astrometrica’: “They tracked objects by looking at images of the sky provided by telescopes based in the US to see which of the objects moving over time could be a possible asteroid.”

As the club gains popularity by word-of-mouth, Atronomica’s star parties have been attracting more and more attendance. While larger parties usually have at least 150 members, gatherings of only about 10-12 people are not uncommon. “It all depends on the interests and availability of members,” says Gupta, given that most members are students.

To get the clearest night sky possible, the club has been holding its gatherings farther and farther away from the capital. “The city is spreading rapidly, so our venues are moving farther out—just like galaxies of the universe,” quips Gupta, a second-year engineering student and member of the asteroid project team. “Earlier, we would drive up to 80 km for our parties at most,” he says, “Now, we have to go beyond 100 km.”

“We drive off to places like Manesar [in Haryana] and Sariska [in Rajasthan],” adds Gupta, “We generally assemble in school buildings, as it is safe there.” The parties double as picnics under the stars, with sandwiches and samosas and chai and cold drinks. “We share equipment, and there are students who engage in a competition of sorts,” says Sahil Wadhwa, an engineering student from Dehradun and another member of the asteroid team.

Occasionally, the group also throws its telescopes open to the public at large by setting them up at crowded spots like Jantar Mantar and India Gate in New Delhi. “These are not perfect settings, as the artificial lights all around are a hindrance [to getting a good view], but one can at least view objects that are closer to earth,” says Gupta, who revels in the joyous surprise he sees in visitors peeping through the telescope. “The moon is the favourite of most people who come by,” he says, “When someone gets excited seeing the craters of the [magnified] moon, it’s infectious.”