Homes on wheels are a dream turning into reality for Indian adventurists. Welcome to a life on the road—in the comfort of your very own camper 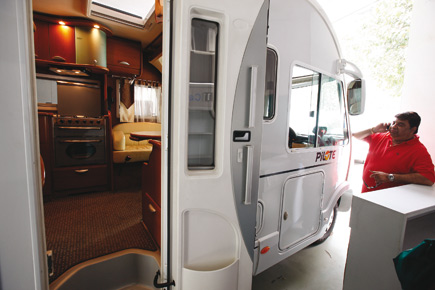 Homes on wheels are a dream turning into reality for Indian adventurists. Welcome to a life on the road—in the comfort of your very own camper


“Are you a motor homer too?” asks 26-year-old Shravan Gupta excitedly. This young designer-in-the-making is always on the lookout for others like him. People, that is, who have motor homes. “I used to think that biking around the mountains gave you the ultimate high,” he says, sounding like an energy drink ad, “That was until I rented my first motor home. It just gives you wings, like… you can go anywhere, anytime you want.”

Shravan is among India’s avant adventurers, those who don’t consider staying in the occasional tent at a campsite a good enough escape from one’s concrete cage in the big city. True liberation, they insist, lies in a home-on-wheels, a camper. “Staying in a resort is so vanilla,” sneers Shravan. Why stay stuck to one spot when you can break­fast in the fragrant orchards of Almora, enjoy a siesta un­der the looming shadows of the Kinner-Kailash moun­tain range, and have a night out with friends in Kumaon’s fabled wilderness?

You don’t need to own a camper. Shravan prefers to rent one for Rs 150 per km. There are many kinds, of course: recreational vehicles (RVs), caravans and camp wagons. “Abroad, there are clear distinctions between the three. However, the concept is so new to India that as of now all three are considered versions of motor homes,” says Tutu Dhawan, an authority on such automobiles in India.

The key motivation is to turn explorer, ready for the ruggedness of the great outdoors without any of the hur­ry of having to return to base camp. No matter how well your wagon is stocked, it always helps to be armed with basic survival skills. Be prepared to go scouting for water, perhaps even foraging for food.

The upside is unparalleled privacy. “Usually, when young people want to get together, there are a lot of re­strictions. But a motor home provides them a private space of their own where they can just be… This vehicle allows you to hang out for as long as you want. You can go to a dhaba, take off to the hills, anything you want,” says Dhawan, who was among the first in India to buy him­self a motor home, nearly 20 years ago. “It had a small kitchenette, shower area, heating system and two-plus-two bunks. At the time, I bought it for a mere Rs 20,000,” Dhawan grins.

It can lure people away from their regular lives so com­pletely as to have them give up concrete. Kapil Arora, of the designer label Kapil & Monika, has more or less made his custom-built RV his workplace. “I conduct lunch meetings here or simply use it to chill out,” he says, “Usually, three or four couples get together here with us, and we go for long drives. Home-cooked food, great com­pany and a luxury environment—it can’t get better than this.” The swanky set of wheels cost him just around Rs 20 lakh, and comes equipped with an entertainment unit for those slow periods. And if he has a meeting in some building to attend, it’s what gets him there.

It’s a splendid life, except that India has yet to make space for those who opt to live it. Unlike the US and Europe, which have special camper parks in scenic spots along highways with water outlets, sanitation facilities and power plug  points, India has nothing for motor homes. “Here, you have to beg and plead with a friend who has a farm to let you park. The few places I know of where they have some basic facilities for RV owners are Amritsar and Jalandhar,” says Dhawan.

There are also long-drawn hassles of getting permission from the Regional Transport Office, which can often bog travellers down.

Half the joy of a mobile home, however, is in doing it up just the way you like. There are several experts across the country who can transform even a humble Tempo Traveller into a vehicle of your dreams. Indore’s Concept Combination, for example, has styled luxury RVs for pol­iticians, entrepreneurs and infotech professionals. “Each vehicle is custom made according to the client’s require­ments. For instance, if it’s a big family, then we work on Tempo Travellers. We have even designed a motor home out of a 30-ft long Eicher bus,” says Sandeep Saboo, who started this company two years ago.

Everything is reworked, right from the engine to the in­teriors. In case of a big vehicle, it could take five to six months. “A custom-made motor home costs Rs 28 lakh in case the chassis is provided by the client. If not, then the cost goes up by another Rs 8-10 lakh,” says Saboo, who recently designed a vehicle for his elder brother in the construction business who needed a comfortable camp­er for site visits. That vehicle, according to Saboo, is his benchmark in terms of creativity and design. It can be extended by 3 ft at the back, and boasts of leatherette in­teriors. “There is a DVD, LCD, fridge, microwave oven, a small bar, mini-kitchen and remote-operated lighting combinations.”

Readymade campers are on their way too. France-based Pilote is all set to launch its Explorateur next month. The company produced its first motor home prototype based on a Bedford chassis way back in 1978, and hasn’t looked back since. The Explorateur is considered a byword for luxury. Built on a Mercedes chassis, it boasts of two single beds, a double bed that opens up once you park, a toilet, attached shower, stove and oven. “This is one of the rare vehicles that provides a state-of-the-art chimney as well,” says Manav Chadha of European Motor Works, a chain of service centres for Mercedes, BMW and Audi that is bringing the vehicle to India, “The driver’s seat can even be rotated to create a lounge.”

Some of these vehicles had been imported in 2009, but newer versions are due in May. “I was a little sceptical about how well the Explorateur will do in India. I thought we would be able to sell 12 to 15 vehicles a year,” admits Chadha. But he was stunned by the response to a model on display at his firm’s Gurgaon facility. “I could see huge smiles on their faces as they walked into the vehicle,” he says, “This has made me very optimistic. There are dealers in Hyderabad, Chennai and Mumbai as well, and even if each centre sells 20 vehicles a year, we can set an annual target of 100. That’s a great number to start with.”

Motor homes, to his mind, speak of the grand luxury mania that’s taking hold of India’s wealthy. “People are spending money on helicopters and yachts, so they are fully capable of spending Rs 70 odd lakh on a Pilote vehicle,” says Chadha.

There are enough in India who are tired of concrete and ready to head down the highway in their own sense of style and comfort. It’s freedom of a kind that has long been denied to Indians, cooped up as they have been with a limited set of leisure choices. In that sense, Shravan is not wide off the mark: wheels can give you wings.