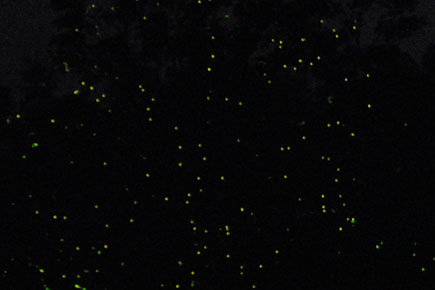 
After close to five hours of blithely fatalistic driving on the state highway from Mysore, we suddenly veer off it. The tractors and SUVs we’ve been tailgating with near-suicidal tenacity are replaced with autos and bicycles. The road tapers between light green paddy fields, and shadows deepen under the trees. An elderly man sits on a cement bench by the road, as tiny young goats frisk about him. When night falls, we creep up a winding gravel path and come to a halt.

Around us is the kind of soft, velvety darkness that city-life leaches out of memory. There’s the rhythmic chirr-chirring of crickets in the undergrowth, and, on the trees, fireflies, winking like lamps from another age. As we walk ahead, they pulse on and off on one tree, and then the next. The Western Ghats tree canopy version of a Mexican wave.

We are in Rainforest Retreat. It’s a 25-acre coffee and cardamom plantation and homestay in Kodagu district of Karnataka. Two research scientists—Sujata, a botanist, and Anurag Goel, a molecular biologist—took over the place about 18 years ago. It had fallen into disuse, and the cardamom plants were infected with a viral disease that made them unproductive. The Goels used their combined expertise to stem the rot and plant anew. For close to a decade, they’ve been cultivating completely organic cardamom, pepper and coffee in the shade of indigenous trees.

Instead of factory-packed sacks of chemical fertilisers like NPK, the Goels use weed processed through their livestock (chiefly cattle, goats and turkeys) as “sustainable biomass”, which, together with dung, urine, wood ash and other farm waste, and the rich organic material from the forest floor, delivers the perfect compost via a process sped up by “effective-micro organisms”. And instead of lobbing a noxious grenade into the rich local biodiversity by pesticide-use, they grow indigenous plants that they’ve screened for insect repellent properties, and encourage insect predators–spiders, wasps, dragonflies, lizards, frogs, snakes and birds–to flourish.

The result is remarkable. With a towering canopy of native trees, shaggy with epiphytes, the plantation is visibly wilder than most other estates in the region, with their young soldierly ranks of exotic silver oak providing shade to coffee plants. But Rainforest Retreat couldn’t have been a commercial property, Anurag says, because it was at slightly too high an altitude and received a little too much rain (about 500 mm annually) for the profitable production of coffee and cardamom.

“The first five years, we worked on the land, and then only on the house,” recalls Anurag, “We sank all our savings into buying it, and then we gave ourselves five-to-eight years to get self-sufficient. Land can really suck up money.” A bearded man with the unforced, sunny smile of someone who can sport bright T-shirts adorned with rhinos and lions every day for the rest of his life, Anurag is grateful for being able to escape the concrete wilds of the city. “There, the TV makes you think you’re No 1, that everything revolves around you, and is for you to consume,” says Anurag, “But living out here humbles you. You see that what you want is irrelevant compared to what Nature wants, and sometimes she wants to ruin your crops.” On his frequent trips across the plantation over the years, Anurag has been spotting, documenting, and, as far as possible, identifying the creatures with whom he shares his home—the shy goggle-eyed loris, fruit bats, palm civets, flying lizards, porcupines, innumerable frogs (an indicator of an ecosystem in the pink of health), and the pinkish-purple caecilian, a squirmy little legless, tailless amphibian, a new species of which was recently discovered in the state. Every time Anurag comes across a species he is unable to classify, he consults the National Centre for Biological Sciences (NCBS) in Bangalore for help.

That’s one of the many ways in which Rainforest Retreat differs from other plantation cottages that call themselves ‘organic’ and ‘natural’, but only proffer evidence in the shape of bath soaps made of ‘natural, organic’ vegetable oils, with vaguely Mediterranean names tacked on to them. Here, every meal is tasteful and healthful, made of organic ingredients grown on the property, or acquired by trade with other organic farms around the country.

Each time you ask about anything you eat or buy or happen to see at Rainforest Retreat, you’re likely to be rewarded with a cheerful lecture. Entranced firefly-watchers are apprised of their life cycle, of which these two weeks of April are the mating season, and informed that scientists so far have not provided any convincing explanation for their synchronous flashing. A query about the organic vanilla pods they sell leads to a mini lecture- demonstration on hand pollination by the Goels’ intimidatingly knowledgeable 12-year-old daughter Maya. She tells me how the original pollinators of vanilla in South America are hummingbirds, but since they’re not found here, the process has to be done by hand.

When we drink coffee in the late afternoon, a tiny lime-chested bird with a lean beak hops about a shrub close by—the Little Spiderhunter, we’re told. When I ask about the variant of kopi luwak—civet cat-processed coffee grounds—that Anurag makes here, he shows me camera-trap pictures of the lean, long-tailed brown palm civet cat strolling past a coffee plant, gives me a potted history of its origin in Indonesia, and describes the process blow-by-blow. He also explains what sets it apart, aside from the famous price tag: “I read this paper by a scientist at the University of Guelph, which analysed what makes kopi luwak taste different in biochemical terms. Enzymes act on the coffee in the civet’s digestive tract, breaking down carbs into simple sugars. This is why it tastes far less bitter than ordinary coffee.”

The Goels’ enthusiasm is infectious. Archana Shetty, who has been managing the place for half a year, gives me a slide show that starts 65-million-years ago, when the Western Ghats was formed in the Cretaceous period, and features bird call recordings and detailed lists of native flora and fauna, interspersed with first-hand tales of sightings. “Among the snakes we have here,” says Archana, “are the wolf snake, the rat snake, the pit viper, the painted bronzeback.” She pauses at a picture of a fluorescent green snake with a sharp angular nose. “That’s a vine snake,” she says, “They’re cannibals. I once saw one with blood all over its mouth. It looked like a child who’d just eaten chocolate.” She shows me a picture of a dark puddle specked with vividly-coloured butterflies. “That’s cow urine,” she says, “Butterflies love the stuff. It’s like their version of going to the pub.” Another image shows a mass of bright green frogs seated in exuberant amounts of froth on a bamboo pole. “That’s on top of the tank. You should see it in June—it’s an orgy out there.” We laugh at a picture labelled ‘horny toad’, in which a squat brown toad is trying to sneak into the melee. (He didn’t succeed, going by a subsequent picture, in which he has slunk a little distance away.)

A brisk ten-minute walk from the cottages and dining area is a small clearing where two tents have been pitched facing each other. I stay in one of them, beside a valley shaded by a towering canopy of trees. A little distance away is a small bathhouse where water is heated in metal urns early every morning. At dawn, I’m awoken by a symphony of hooting and chirruping rising from the valley next to me. I peer through the tent’s net window to see the tree trunks covered in mist. A sound catches my ear—something uncannily like a schoolboy whistling with studied nonchalance as he walks away from mischief. It’s a little blue-black bird called the Malabar whistling-thrush, and it’s the first to sing in the morning, and the last to be heard at night.

My itinerary includes a one-hour hike up a grassy slope with a friendly guide, Ravi, and two billing and cooing couples. (Except for the frogs and fireflies, it’s mating season all year round at Rainforest Retreat.) We clamber up to a windy ridge. Around us is a panoramic view of the valleys. The couples are suitably enchanted, and record the moment and view for posterity. Then we head back in time for fresh lemonade and a wholesome lunch, rounded off nicely with cardamom cake.

Most visitors are content with Rainforest Retreat’s hearty meals and choose a half-empty itinerary that leaves plenty of time to take advantage of the inviting hammocks around. There are some grumpy outliers, though. Browsing online forums on my return, I come across visitors who complain about the Retreat’s lack of diversions and creature comforts. ‘The beds were damp,’ whines one disgruntled visitor, ‘and there was no electricity to charge our hairdryer and cellphone—just one dim solar-powered light.’

I, however, was grateful for the merciful muteness of my out-of-range phone. And I can’t imagine why anyone would choose to spend the night sequestered inside a tent under a bulb, whether dim or bright, when just five feet away, there’s a sky glittering with stars and a forest pulsing and flashing with amorous fireflies.