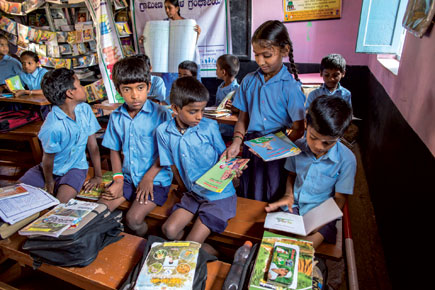 
“Once upon a time there was a superman,” hesitantly begins Vishwas, a class seven student at Vadarahally government middle school in Hassan district. He then goes on for five minutes, slowly gaining confidence as he tells the story of how the “good superman defeats the bad superman”. It’s his version of the superhero’s story and it isn’t very long. But at the end of it, he gets a round of applause, the loudest from his librarian Chandrakala. “He couldn’t read a single word when he came to us in class five,” whispers a teacher. “Chandrakala would read storybooks to him, encourage him to try and read himself. Today, he can read and he is one of the best storytellers in school. And like all the other children, he eagerly waits for Chandrakala’s visit every week.”

It’s been six years since Chandrakala started carrying the world of stories in a small plastic bag. Twice a week, she steps out of her hut overlooking the catchment area of the Gorur dam, walks past her corn fields, down a mud track and then another couple of kilometres to reach Vadarahally government school. She waits in the corridor outside the classes for the children to gather. And then she carefully takes the 25-odd books out of her bag and places them on the floor.

There is an instant scramble among the children to lay hands on a book of their choice. In a few minutes, it is replaced by the buzz of reading—a steady sound of words merging into sentences and then the unfolding of a story. Some pause as they reach an unfamiliar word, some flip through the pages, stopping only to look at the colourful pictures, but nobody looks up from their books. For an hour, twice a week, ‘Chandrakala miss’ transports 39 children from this small school to an unknown world of adventure, fantasy, kings and queens, forests with animals most haven’t seen and landscapes unheard of.

A student preparing for her BEd exams, Chandrakala joins the children—sometimes listening, sometimes reading aloud to them. “When I was growing up, I did not know what a storybook was,” she says. “All the books I ever read were school-related. As I grew up, I read books on general knowledge, the odd biography but never, ever a storybook. Now I read, just like the children. And the best thing is sometimes I just read—not necessarily to prepare for an exam.”

The youngest of four daughters, Chandrakala is one of eight volunteer librarians in Hassan district, 180-odd kilometres from Bangalore, who take books to children across this region of Karnataka. They start by taking a bus once a week to Gorur, where in an ancestral home more than 100 years old, there are two almirahs full of books.

“This is Hema Srinivasan’s home,” says Kala, who is in charge of the library programme being run by Srinivasan’s Saranga Trust. “Nobody lives here anymore; only the books. Every weekend, the volunteers come and exchange their set of books, choosing a new set from the nearly 3,000 books we have here. Some run the libraries from their homes, others from the premises of the government schools in their villages. The children sometimes take them home to read and some even read to their parents.”

Under the light of a naked bulb, Kala opens the doors of the almirahs that stock mostly bilingual books, besides a neatly bound bundle of Tinkle comics, fairy tales and a whole lot of colouring material. Each is neatly marked with a green, red, orange or white sticker to indicate various reading levels. Once a week, these books travel out of Srinivasan’s house and into the homes of the children in the eight villages where this programme runs. The programme is based on a low-cost model to run libraries developed in Bangalore in the early 2000s.

In 1999, IIT Chennai alumnus Umesh Malhotra decided to quit his job in the United States and come back to India. His five-year-old son wasn’t very keen because he said there was no library in Bangalore. “He was a member of this beautiful library in the Bay Area in California, and to get him to move to India we promised him a library here, and that’s where we began,” says the founder and CEO of the Hippocampus learning centres in Bangalore, who has created one of the most widely used templates to run low cost libraries successfully in the country.

Malhotra points out that, unlike anywhere else in the world, libraries in India are mandated by the Government in all their schools. He describes it as “a beautifully broken system”, where the booklist comprises of biographies and general knowledge books and the library is locked up inside a trunk. Srinivasan adds: “When we started volunteering with government schools in Bangalore around 2005, we realised that reading skills were non-existent, even in Class 7, despite the fact that there were reading programmes running in these schools.”

It was against the backdrop of similar statistics that various library programmes began in various places.

In 2003, after the Malhotras set up the library they had promised their son in Bangalore, they decided to look at creating similar library facilities elsewhere in the state. By 2005 they had 38 libraries running in partnership with various non-governmental organisations in and around Bangalore.

“But there was zero impact,” Malhotra recalls. “We had these beautiful libraries, stacked with amazing books but the system was not working. Children were coming into the libraries but nobody was picking up a book and reading. The children were confused and unsure in the library space because they didn’t know how to find a book they could read.” So they went back to the drawing board and came up with the ‘Grow by Reading’ library programme.

Shaifali, the programme manager at Hippocampus, is normally armed with two bags and five books when she does a training programme on how to run a low cost library with a one-time investment of Rs 5,000. “We start out by explaining to librarians how to assign levels to books, starting from green for single sentence books to yellow for novels,” she says, swiftly going through the training material in her bags. “We insist they also grade the children that come to their libraries and ensure that they get the books they can comprehend. Library cards are made and the reading progress of a child is monitored through a very simple data sheet.”

As part of the programme, each librarian is also given a booklist from which they can pick multilingual books, complete with the contacts of publishers. A set of three activities in five languages was also created for each story book in the green and red (three to four sentences) category to gauge if a child was comprehending what he or she was reading. Slowly, the system has come to life and is being used as a base by numerous organisations across the country, including the global Room to Read programme, to set up libraries.

Sowmyashree, a class 5 student at a government lower primary school in Chikkabegur village in south Karnataka’s Chamrajnagar district, got access to her first storybook in 2012 under the Grow by Reading programme supported by Mobility India. Since then, she has read five books and shyly says that Tenali Raman is her favourite. Most of her friends love books with animals in them or those with a grandfather and grandmother. One of the most popular books across some of these schools is the story of a polar bear. The thought of snow and the description of a polar bear’s habitat is a conversation starter across schools here, where a group of children are trained to run the libraries themselves.

“It’s the best thing that could have happened to these children,” says HP Siddharaju, headmaster of a government higher primary school in nearby Arralikatai village. “Now in the evenings, instead of running wild and staying out till late at night, the village children, including those who don’t study in this school, come to the library. The access to good reading material gives them access to the world of reading and it has impacted their performance in school also.”

The Akshara Foundation first started its reading programme in 2006 in government schools in Bangalore urban district. It began by redefining what a library meant. “The library is not just about borrowing books; we wanted it to be a multi-functional space linked to classroom learning,” explains Ashok Kamath, chairman of the foundation.

Akshara started by creating simple laminated reading cards that a child could also take home. Like Hippocampus, it developed library-related activities, got storytellers to spin yarns for the children and at the end of five years achieved “significant results”.

“Between the first phase of the programme and a follow through the mop-up phase, nearly 86 per cent of the children were converted to ‘reader’ category, [having] acquired the ability to read unknown sentences or paragraphs,” says Kamath, adding that most of the libraries have now been handed back to the government to run.

Similar success stories are to be found in other parts of the country, too. In Ladakh, the 17,000 ft Foundation takes books to nearly 100 schools, some with just a handful of students. In Madhya Pradesh, Deepali Verma of the non-governmental organisation Eklavya has been working on making the learning process more ‘rauchak’ for children. In 2010, it opened its first pustakalay. Today, in nearly 50 school premises across Ujjain and Hoshangabad, “visible changes in children with access to books have been recorded”.

“We started by letting children touch and feel books, something school teachers didn’t encourage because of their fear of damaging books,” says Verma in a telephone conversation. “We made schools open their trunks and gave children our stock of books. Initially, we lost a few books, some were torn, but once the children realised it was for them, they treated them like a prized possession.”

As in Chamrajnagar, in Ujjain and Hoshangabad children are trained to run their own libraries. And they also do numerous book-related activities. “One of their favourites is when we make a character disappear from a storybook and then ask them to recreate the story without that character,” says Verma. “Slowly, children are interpreting stories, asking hundreds of questions and using them for school projects and drama.”

In the Gorur library, a beautifully illustrated book telling the classic tale of Beauty and the Beast is very popular. Nobody in that school can really read the book, but everyone is fascinated by the illustrations. In a corner of the school library, which operates in a large room with wooden cupboards stacked with dusty, curriculum-related books, a little boy sits on a bench and draws the beast in his art book. As he colours it, girls peer over his shoulder to see the gown the girl in the illustration is wearing.

Rumpelstiltskin, Goldilocks, Dr Seuss and Disney stories jostle for space with vernacular books on the open shelves of this library. Many of the books are donated and many are untouched. But librarian Kala is confident that one day, eager hands will reach out for one of the “English books with beautiful pictures” and read a story no one here has read before.