Elephant and the Mahout 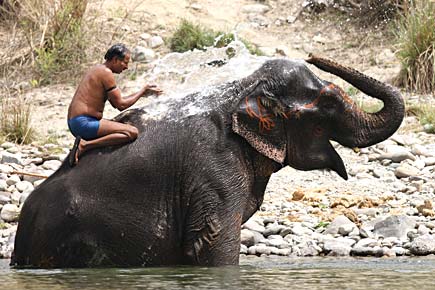 
Sayyad Ali is the custodian of an ancient friendship. He guards what is perhaps the oldest animal-man relationship in the world—that of the elephant with its mahout. This is a bond that cannot be understood easily by anyone else, for it involves a cruelty so extreme that it can only be redeemed with a love of equal if not greater intensity. To watch the relationship is to observe the terror of the ankush at one moment, and the endearing coddling of a baby the very next.

The domestication of a wild elephant, the transforming of a beast that can reduce you to pulp at a whim to one that’ll do as you command, is cruel business. It’s a programme beastly enough to put Guantanamo Bay in the shade. The subduing of an elephant requires, at the very onset of the exercise, a clear demonstration of who’s in charge.

Having evolved as a herd animal in the wild, instinctively given to the ways of group survival and subordination towards a leader, the animal’s mind is encoded to be receptive to such messaging. It’s not pretty. There are thrashings, druggings and starvation regimes. To have a wild elephant submit to human control is to have it learn that life is about punishment and reward, and the mahout decides which it will be. And even with all that, it will never ever be fully tamed.

An elephant’s walk looks relaxed, effortless, even lazy. But it’s also deceptive. For, in every move of the lumbering pachyderm lurks danger, possibly death, without the slightest hint of warning. Not too long ago, Sayyad Ali’s brother and fellow mahout was put to death by an elephant. He refers to the incident in generalities, saying that methods of execution are sometimes brutal—legs ripped apart, bodies torn asunder.

The tragedy that befell his brother doesn’t deter Sayyad Ali. “This is the only job I know,” he shrugs, “I love my elephant. I have been with her for a long time. Yet, I know that it’s a wild animal. If I take away my power from the equation, or if I become complacent, death is not far away. She can finish me off as if I’m a fly.” The custodian goes about his job at a hideaway river retreat of Jim Corbett National Park, at the Himalayan foothills. It’s prime tiger territory, but the eyes that hold his gaze are those of his elephant.

Each elephant has a personality of its own, complete with idiosyncrasies. And it’s always the eyes that give it away to a trained mahout. They tell him how hard it would be to tame. If they’re bloodshot, it speaks of an aggressive temperament. Even amber can be difficult to tame. What Sayyad Ali has with him, he found as a brown-eyed beauty. And as expected, she turned out to be a well-tempered darling, a fast learner.

So what makes the relationship tick? “It’s like making love,” expounds Sayyad Ali, as he ties the howdah or seat to the animal. “We are one. Once astride, it is not two people who create the magic. I am her nervous system, she is my body. I do not feel different out there on top, I feel part of her.”

As the day progresses, the couple embark on their rounds of the jungle, the daily safari. It is here, in dense foliage, that the man’s relationship with the animal really comes alive. To the elephant, it’s natural habitat, or ought to be, we humans suppose. But if she could have it her way, she’d rather not venture into the jungle. There are wild tuskers, sometimes in heat, out there. There could be a hidden leopard, or even the lurking tiger. It’s complicated, perhaps even a little sad that our love of wildlife is a burden for the elephant. “When you see a tiger,” says Sayyad Ali, “that’s when your skills come into play. You sit erect, you issue commands with both your feet, and if need be, you keep the ankush ready. She will sense if I am frightened. Even a slight hint or lightest of shivers can put her on the defensive. Or worse…” The crux of his job, he says, is to keep the elephant calm whilst thrilled tourists go clickety-click with their cameras, oblivious of danger.

The mahout takes years to master his craft. The first six years are as an apprentice. This involves caring for the elephant. The feeding and bathing of an elephant is central to knowing the animal. Here the relationship whirls on the side of love. There is gentleness and banter. “I believe that the elephant talks to me,” says Sayyad Ali, “I have had occasions when I have been nasty to her, and I have said sorry, and she has accepted it. These are difficult things for you city dwellers to understand. Bear in mind, I spend the whole day with her. So yes, I talk to my elephant all the time. The only time we do not talk is in the jungle.” His feet and the ankush do the talking here.

The elephant has a powerful nose. Given poor vision, it relates to the world through its trunk. This means the mahout must care for the trunk as if it’s an animal by itself, using a range of herbal medicines to keep it in fine health. It’s always herbal; allopathy is only for big injuries.

After the safari, it’s dinner time. About 150 kg of food every day. There is sugarcane and jaggery, a good 20 kg of the sweet stuff. For variation, there are wild mangoes and fresh grass. All this is washed down with lots of water. Dinner over, it’s the elephant’s favourite time—bathing in the river. The tenderness and playfulness of the magnificent beast are on display. You can almost see her smile. The feet are scraped clean with loving care. The body is caressed inch by inch, sanitised.

As we bathe the big baby, I ask Sayyad Ali if the legacy will go down another generation. “My son will not do this job.” The vehemence of his response is startling. “It pays nothing. There is no place in the modern world for this job. The danger of death is always in the background. No. I will work hard here in the jungle so that my son gets a degree and makes a man of himself.”

It’s dusk by now. The river is in the path of the tiger, and we scamper off, back to the yard where Sayyad Ali and his elephant sleep, a few yards apart but never really separated.