Death on a Train 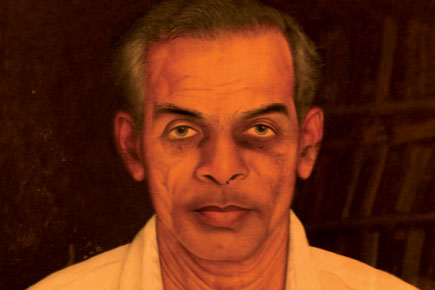 
In the early 1930s, my grandfather, KCK Raja, was a student at Victoria College, Palakkad. The last class for a term had ended, and in the evening, he and eight or nine other students who stayed at a lodge in town bought two bottles of beer. They mixed 12 bottles of soda in it and then got drunk on this potent cocktail. That was the only time he touched alcohol in his life.

It wasn’t something that fit his character. He was what you would now call ‘a pious man’. At the age of 73, after being diagnosed with prostate cancer, he was being wheeled in for surgery to remove his testicles. His wife walking alongside asked him, “Are you afraid?” He replied with surprise in his voice, “Why? Isn’t that Sri Krishna holding this stretcher? He is coming with me.” If he was not trying to assuage her, he was probably hallucinating. His faith in God was total. There was not a day we didn’t see him chanting “Narayana… Narayana… Narayana… Narayana” under his breath. It was a part of him that he didn’t forsake even when he was full of Marx, setting up the first trade union among workers of Karnataka’s Kolar gold fields in the 40s. Or in jail as a freedom fighter. Or, after his disillusionment with the Communist party, as a Gandhian wearing only white khadi till the end of his life. God was always by his side. He believed so.

In December 1998, he was 81 years old and returning from the home of his younger daughter in Chennai. Accompanied by my grandmother and aunt, he caught a train to Coimbatore around 8 pm. As they prepared to sleep, my grandmother noticed an ordinary looking man sitting on the side berth reading a copy of The Week. She made a snide remark to her daughter that he should be sleeping, and they forgot about him.

Around one o’clock at night, my grandfather woke up and said he wanted to go to the toilet. My grandmother followed him and waited outside. When he didn’t come out after a while, she asked if everything was alright. He said he was feeling breathless and didn’t have the strength to get up. She went back, took a Sorbitrate to make the blood flow easier to his heart and gave it to him. They returned to their berth, but he was still uneasy. She gave him another Sorbitrate and woke my aunt. Neither knew what to do except keep asking him if he was getting any better. He was not. Eventually he said he wanted to lie down. He splayed out one leg, kept the other bent upright at the crook of his knee, and then closed his eyes. After a while, my grandmother noticed that his lips had dried. She took a water bottle, filled its cap with water and poured it down his lips. She did this six or seven times and all the water went in. When my aunt tried to give him water, she dropped the cap in her anxiety and spilt it.

That was when the man who had been reading The Week got up to ask them what the matter was. He offered to find a doctor and returned with one—a woman who had been sleeping in the neighbouring cubicle. She had no medical tools and looked with a torch into my grandfather’s eyes. My aunt, peeping over her shoulder, noticed that his eyeballs were affixed to the upper edges. The doctor took the man aside and started whispering. My aunt interrupted them. “It’s over, isn’t it?” she asked. The doctor didn’t give a straight answer and instead said that when parents leave, it is natural that children feel sad.

The train stopped at Jollarpettai and the man brought a railway doctor who said that they would have to take my grandfather to Vellore hospital for treatment. My aunt suspected he was saying this only to do a post-mortem as per some rule of the Railways. She couldn’t imagine being alone with her mother for days dealing with the Railways, hospital and police. She told the man she didn’t want to get down. He said he would handle it. She saw him speaking to the doctor, who turned back and went away. The man then came inside the compartment and told the two women not to worry; he would get them till Coimbatore. But, he added, they should not cry because if anyone in the compartment complained then they would be forced to get off the train. That was when my grandmother realised that her husband was dead. She didn’t cry.

For six hours, the two women stayed silently next to the body. They saw the man speak relentlessly on his mobile phone. Before Coimbatore, a travelling ticket examiner came and sat down next to them. He said that he had already been told by the man what had happened. He promised to help them. When the train rolled into Coimbatore station, there were a large number of young men with a stretcher. They placed the body on it. The ticket examiner said they should take the back exit because there might be police at the main exit. Once they got out, there was a van waiting. The man told them they might be stopped at the Walayar checkpost while crossing the border to Kerala. He asked them to mention his name if that happened. My aunt thrust some money at him and he brushed it aside. No one stopped them at the checkpost, but my aunt saw that he was right behind them in another vehicle. He turned back only once they had crossed to Kerala. They never saw him again.

After they reached Palakkad, the first thing my aunt did was go to her brother who was at his wife’s home. It was only after she got past the gate and saw him that her tears came pouring out. As for my grandmother, she did not cry at all. Not then, not now. She says that the hours she spent next to the body, suppressing her grief, did something to her. But she’s certain about one thing. That it was God who sent that man in that hour to take charge of everything.

There was one little twist to the story. If it were God who organised the presence of that man, then He had a sense of humour. After the final rites were over, relatives went to Coimbatore a couple of times to say ‘thank you’ to him. He was never home. On one of the visits, his son was. And we learnt that the man God had sent in aid of His teetotaller devotee was a liquor contractor.