A recent conference in Delhi drew highly professional attention to a work-related question that goes unasked in this uncaring city. What ails horses, donkeys and mules at work? 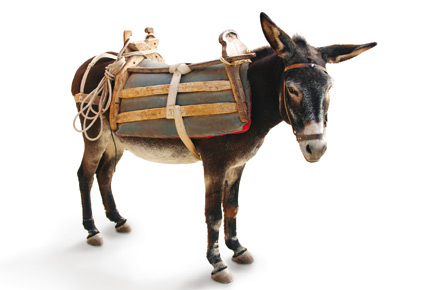 A recent conference in Delhi drew highly professional attention to a work-related question that goes unasked in this uncaring city. What ails horses, donkeys and mules at work?


If there’s anything that makes my ears prick up, in a manner of speaking, it’s emotion talk. And if it’s about the mood swings of equines—yes, horses, mules and donkeys do have emotions—my curiosity is nigh impossible to contain. What are often no more than ‘beasts of burden’ to us humans, it turns out, are actually creatures of care, subject to the same elation when rewarded generously and afflicted by the same depression when crushed by a dead-end job.

Now, nobody wants couches laid out for equines to squat on and bare their souls, but do they not have the right to proper medication, adequate diet, some compassion and a bit of understanding?

It was to discuss this and many such things that an assortment of 200 scientists, veterinarians, animal rights activists and NGO representatives from across the world gathered in Delhi earlier this month. Hosted for the first time ever in India by Brooke, an international equine welfare charity, this Sixth International Colloquium on Working Equids was unique in more ways than one. Never before had people from such varied disciplines—such as agricultural engineering, animal behaviour assessment, zoo management and animal sciences—met to wrestle with the problems of work animals of the equine species.
One could feel a spirit of hearty collaboration all around, as people sat attentively through the sessions, open to learning something from one another and coming up with new approaches that would benefit both working animals and their owners. In fact, a remarkable sense of energy and purpose seemed to fill the room where the discussions were underway. It was almost like entering another world where the usual concerns of life didn’t matter, at least not for those four days.

At first, it was odd—even vaguely amusing—to watch delegates discuss the mental makeup of a camel, say, or the family life of elephants with such passion over tea and coffee. But after a couple of hours in the same room, it seemed perfectly natural to worry about the trauma that non-human species must suffer in human habitats built without the foggiest thought of their existence. Indeed, in a matter of minutes, I found myself gravitating to the discussion and blabbering about the plight of two cart donkeys, Ramu and Bhola, that I had come across earlier this year.

One of the most authoritative voices in the room was that of R Cyril Roy, who has made something of a habit of studying the behaviour of donkeys. Physical pain, his research has demonstrated, can cause tension and dejection to the extent of lowering a donkey’s capacity for work. I wouldn’t doubt him if I were you. If anyone knows this subject really well, it is him. Having done an MSc in Applied Animal Behaviour and Animal Welfare at the University of Edinburgh, UK, he knows just what he is talking about.

Plus, there is field data to back his claim. Roy has conducted a study tour in Uttar Pradesh’s Ghaziabad district. His findings suggest that most of India’s 1.6 million donkeys suffer from some form of chronic pain, injury or lameness, and are thus likely victims of severe depression. Roy has also used a behaviour assessment tool developed by Fran Ashley that not only recognises but also quantifies this pain. “We observed two kinds of behaviour—posture behaviour or position of ears, eyes, head, muzzle and tail, and event behaviour, or body movement, vocalisation etcetera,” he elaborates. By his findings, pain also tends to reduce the three common animal behaviours of sniffing, walking and chewing.

“This reduction in eating and drinking behaviour can be harmful for the animal,” says Roy, “I think this finding will be very useful for vets and owners in assessing the level of pain.” All through this discussion, I could imagine tears of joy streaking down the cheeks of Ramu and Bhola—somebody somewhere not only understood their pain, but was also standing up for them.

As Roy spoke, one couldn’t help but notice a striking poster of a mule struggling to pull a mountainous load. The bulging veins, nearly popped-out eyes, that look of anguish—it’s only too familiar for anyone who’s seen animals at work. It is an ongoing tragedy. “Animals can’t carry more than 15 to 20 per cent of their body weight, whereas I can see a lot of them pulling 50 to 100 per cent of their body weight, if not more,” observes Dr E Bobobee, who is part of the agricultural engineering department at Ghana’s Kwame Nkrumah University of Science and Technology.  There are instances of camels and donkeys being forced to haul more than 800 kg of load.

Beasts of burden, however, do have some basic rights under Indian law. For instance, under the Prevention of Cruelty to Animals Act, 1960, anyone ‘who beats, kicks, over-drives, over-loads, tortures or otherwise treats any animal so as to subject it to unnecessary pain or suffering…’ can be fined and punished. “However, a serious enforcement of such Acts is yet to be seen,” says Dr RM Kharb, chairman of the Animal Welfare Board.

From here on, the discussions assumed an air of gravitas, as the topics became more and more dense. Of course, the same problems were said to be affecting work animals across the world; common complaints ranged from the inefficiency of the state-owned healthcare machinery to the harsh attitudes of owners and their utter lack of knowledge on how to handle their animals. But the proceedings soon took a turn for the specifics of diseases that needed to be fought.

Parasitic infections and ailments, it appears, are on the rise globally. Hannah Gamal, who works with Animal Care in Egypt, spoke about something called synovial sepsis in working equids that leads to severe soft tissue lacerations and skeletal injuries. From the nods and murmurs in the room, it is obvious that this is an important issue. “Sepsis usually occurs as a result of puncture wounds, road accidents, and spikes,” she says, “However, it is bite wounds that cause 42 per cent of donkey injuries.”

Hannah’s exhortation is clear and loud: these animals have a right to medication, instead of simply being abandoned. She suggests regular dressing changes for the wounds until ‘epithelialisation’, enforced short periods of exercise, five days of procaine penicillin and gentamicin. In the midst of a lecture on prescriptive medicine, comes this intriguing piece of advice to owners: “I would urge them to especially keep overstressed females away from the males. They could bite severely if teased by the males.”

The rest of the session was about one painful, smelly infection after another, the names of some of the diseases being menacing enough for a horse to choke on. Epizootic Lymphangitis, for example, is as mindboggling in its pronunciation as its treatment. These reeking pus-filled lesions seem to be the biggest enemies of equines in Africa, the Middle East and Southeast Asia.

There was more to come. Geta Mulugeta, who works with Donkey Sanctuary in Ethiopia, is an expert on gastro-intestinal parasites like cestodes and liver flukes that affect donkeys, horses, zebras and wild asses. “Donkeys and wild asses are naturally resistant to parasitic infection. However, in developing countries, donkeys are exclusively used for work [97 per cent of the world donkey population is] and are fed low diets. This leads to stress and thus high susceptibility to parasitic infection,” he cautions, touching upon a common cause for an animal’s early demise, or reduction in output at the very least.

The wet season, it has been observed, spawns higher levels of infection than the dry season does. This makes it important to de-worm donkeys annually at the end of the rainy season. “The dry season acts as a natural break in transmission, as worms can’t survive on dry ground, [which makes] a second de-worming unnecessary,” in Geta’s words, “There is also an increase in resistance to anthelmintic drugs globally, so reducing usage is a good step towards limiting the chance of animals developing immunity.”

For all the technical aspects, the broad emphasis of the conference was on the right of animals to medication, rest and a proper diet. As the colloquium drew to an end, one couldn’t help feeling a warm glow inside. The prospects are brightening of the man-animal relationship drawing upon a reservoir of mutual respect. The way ahead may be led by compassion as much as mutual advantage. Animals don’t need couches to bare their souls on, but people who care enough for the voiceless to heed their whimpers.