What makes The Table in Colaba Mumbai’s latest ‘it’ restaurant 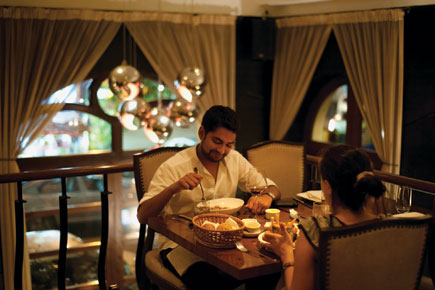 What makes The Table in Colaba Mumbai’s latest ‘it’ restaurant


It is lunch time on a Thursday in Colaba. Inside The Table, a low buzz of conversation is audible against the classic jazz playing in the background. All seats have been taken. The mix is diverse—fashionistas, businessmen, society wives and more. Some sip cocktails and others tuck into the ‘chic comfort food’ the restaurant has become famous for. On the communal table, right by the bar, sit Gauri Devidayal and Jay Yousuf, owners of the restaurant. They are devouring Steamed Red Snapper done in Hong Kong style with Soy Bouillon. They make me try the Table Bloody Mary, which leaves a delicious spicy and tangy aftertaste. The Roasted Red Beets with goat cheese, orange, mint and pine nuts is so cool that I forget the heat that hangs outside those doors for a minute. The chef, Alex Sanchez, is also here now. He seems to know most of The Table’s patrons. “So good to see you again,” he says, gets up and sees out a family of four.

The conversation on the communal table is eclectic. “Have you seen that new food show on TV? Ummm… is she trying to be Nigella? Aiming too high?”; “Some restaurant awards are given to please everyone”; “Our visiting chef is cute, I have asked him to parade up and down the restaurant every evening.” It’s a relaxed vibe—one that The Table works hard to generate. In spite of being surrounded by some of Mumbai’s best known and swish restaurants and cafés—Indigo, Moshe’s, Le Pain Quotidien and Wasabi, to name a few—The Table has managed to grab the ‘it’ tag pretty early in its existence.

It’s the place where everybody knows your name if you are a regular. The restaurant’s ever-changing menu has influences from all over the world. The atmosphere is New York bistroish. It’s a rare day if its owners and Chef Sanchez aren’t there to recommend a dish, ask for feedback (good or bad) or just chat for a while. “So many people come and ask me if Alex is single, and I am like… ‘What? Let’s talk about his food’,” says Gauri. “Some people tell me, ‘You’re not in town, okay, we will come when you are there.’ It’s strange, but maybe it’s because we are always here. It’s our favourite place to eat too. Most people who come here now have their regular order.”

A year-and-a-half ago, the couple gave up their jobs—in the fields of accounts and technology—to bring to Mumbai what Jay says is a slice of “San Francisco’s dining culture”.  “We just want people to leave happy. They don’t need to worry about what they are wearing when they come here—they just need to find the food delicious,” says Gauri. They roped in Alex, a graduate of The Culinary Institute of America, who had worked in many of San Francisco’s kitchens. Alex was awarded Timeout’s Best Chef Award in 2011; and Times Good Food Awards named The Table the restaurant with the best Global/European cuisine in 2012. Food critic Rashmi Uday Singh says, “Alex keeps the proportions fine-tuned and flavours sharpened. For instance, the ‘zucchini spaghetti’, which is not ‘spaghetti’ at all but three ingredients tossed in butter: strands of zucchini, slivers of almonds and Parmesan. Yet it packs flavour and texture.”

Alex says that it is because they have understood what people like eating that The table has a steady clientele now. “We don’t want to bastardise the food but Indians like strong flavours, so we are open to incorporating that in the menu. There was this one time when we had thought of having cauliflower fritters on the menu, but that was too much like gobi ke pakode, so we ditched that. I have stopped being offended when people say some of the food is bland. Slowly, people have started liking what we serve. They are developing a taste for it.”

Purva Mehra, food critic for the online city magazine, Mumbai Boss, once dined at The Table with a bunch of fussy vegetarians. Her verdict: “The Table managed to satisfy them without creating or tweaking existing dishes according to their specifications. I think the politeness of the staff and the chef’s faith in his menu helped pull this off.” The ingredients are all sourced from India, so it’s fresh. “We aim to never have an ego about ingredients,” says Jay.

Brazilian diplomat Luis Antonio Silos walks over for lunch to The Table every now and then. He likes the fact that the food hasn’t been Indianised and that Alex always has a recommendation handy. “I love the beef there. He knows just how to cook it right, and as soon as I walk in, the staff lets me know that my favourite cheese puffs are waiting for me,” he says, “I have lived in 12 countries and eaten in too many restaurants. This is one of the best.”

Karen Calcuttawala, another regular, is a retired chef who worked at the Taj Group in her early days before shifting to Europe. She says, “The only fault I can point out is that it’s too noisy when it’s full—and that’s every time I have been there.” Harshad Daswani, a businessman, keeps going there because the food and service is so consistent.  “They know what you want to eat. They remember what you ordered the last time you were there and where you like to sit.”  And Neville Umrigar still remembers what he ate the first time he walked in. “I had the Chicken Wings and my wife had the spaghetti. We now go at least four times a week. You always end up meeting a few people there, or you can just have a conversation with Gauri or Alex about food. I am the pickiest eater you can find, and I like almost everything there.”