Ariel Garten is a fashion designer, psychotherapist and neuroscientist—and her company makes a headband that offers a shortcut to meditation 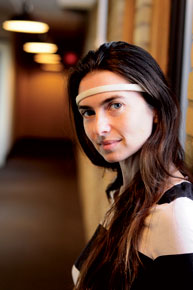 An average student would not come to school wearing clothes that she has designed herself, but Ariel Garten has never fit a stereotype. Her mother is a well-known artist in Canada and Ariel grew up intimately involved in the creative process. She would see her mother take a blank canvas and turn it into something beautiful using only her imagination. And that, she says, helped her realise that she too could be anything she wanted to be.

At the age of 16, Ariel started to make T-shirts and took them from store to store, trying to find someone who would be interested in putting them on display. A couple of them agreed. “And so, all of a sudden, I was a designer,” she says. That eventually led to a line of clothing that sold in 30 stores across North America and the launch of her own store.

For an illustration of her art, there is an interesting story. On the main street, near Garten’s store, a construction started annoying residents in the area. She went out, took some concrete from the street, ground it, put it inside fabric and made clothes out of it. “Because my designs are always sort of philosophical. I wanted to show how we live inside a city. Clothing is like the architecture and structure that surround you. And so I made that very obvious by putting concrete inside the fabric,” she says.

We are sitting in a restaurant at the National Centre for Performing Arts in Mumbai. Garten has come here for India’s first edition of the TEDxGatewayWomen Conference. Her talk is about how freedom can help you create the world you want to see. It is a freedom she is well acquainted with. Garten might be a fashion designer but that is not the only identity which brings her here. Her LinkedIn account says she has been the owner of an art and fashion boutique, director of a real estate company, psychotherapist with a private practice, neuroscience researcher and founder of InteraXon (a company which specialises in the production of wearable equipment, using a person’s brain activity). That is a lot for one person to have accomplished in just one lifetime. “I have always felt that there are no barriers in life, nothing that you can’t achieve. I am short but I feel that I can also be a basketball player if I want to,” she says.

Garten does not see the divide between science and art that others do, and when she decided to pursue neuroscience, it wasn’t to move away from art. “I am fascinated by how the world works. Even more fascinating than how the world works is how we work. I wondered how we create the experience of the world around us. And since my mother was an artist, I became very sensitive to experience— what emotions are like, what colours are like, what reception is like. That led me to try to dissect my own experience; my psychological and neuroscientific perspective to understand how that experience came into being,” she says.

Garter trained in the laboratory of Steve Mann, a professor of electrical and computer engineering at the University of Toronto. This was also where she met the co-founders of what would go on to be InteraXon. One of their first experiments in the laboratory was to create music based on human brain activity. They would connect people to electrodes which would read and use brain activity to control different sounds and create a concert. A MIDI interface would link the brain activity to musical instruments. “When you relax, you increase your alpha waves. Let’s say we attach your alpha waves to the volume. As you relax, the volume goes up because the alpha waves go up. And as you focus, the volume comes down because the alpha waves are lower,” she says. One person could thus control volume, another the pitch, yet another the arpeggio and so on.

The team at InteraXon soon realised that if this can be done with music, there could be other applications as well. Their next invention was a chair that moved up and down in accordance with how relaxed the person sitting on it felt. “We said if we can control music by brain wave activity, why can’t the computer then control a winch? We had a winch in the ceiling. As your brain wave activity changed, the motor would respond accordingly and the chair would rise,” she says.

It was a story in a local newspaper about their levitating chair that led to their most ambitious project. The newspiece got the attention of the Canadian government’s Ministry of Research and Innovation, which asked them to be a part of an Innovations Award Programme. They agreed, but also put up a proposal for an installation that they wanted to do for the 2010 Winter Olympics. The project they came up with was to control the lights on the country’s tallest structure CN Tower, parliament buildings and Niagara Falls by using people’s minds from across Canada.

Garten says that the project had two control paradigms: focus and relaxation. When the brain is processing and thinking, there is beta wave activity; and when it is relaxing, there is alpha wave activity. This activity was connected to a Virtual Private Network on the internet, which would then link to computers connected to the lights. “As they focused, their beta waves increased and the lights on the CN Tower would spin faster, and as they relaxed, the lights would slow down into a pulsing star. Or change colour.” Her mother, who was in Toronto could view the CN Tower from the end of her driveway. She called her daughter while looking at it. “I told her, ‘Look up, that’s me, mom. That’s me on the tower.’ They also went down to the Niagara Falls and I made the lights of surrounding the water turn pink using just my brain,” she says.

Was it a massive art or science installation? Both, according to Garten. “That was really the turning point for the company. We were kind of at the world stage.”

InteraXon began as a company in the field of thought controlled computing, but it soon changed its focus to brain sensing technology. “Early on, we were doing things like controlling levitating chairs, making music. It was about control. And then we realised that the technologies were still too young to really demonstrate effective control, human hands were still better at it. But one thing that our projects did very well was to look inside your mind and understand it. And so we moved from our previous paradigm of thought-controlled computing to brain sensing technology. The idea was to use the information gained about yourself to learn and control not the world but yourself,” she elaborates.

The product her company arrived at is called Muse, and it looks like a headband that rests its weight behind the ears. It is actually a clinical grade electroencephalogram (EEG), which picks up the brain’s electrical impulses from the scalp. InteraXon’s website explains the process: ‘The neurons in our brain communicate by sending small electric impulses to each other. When a large number of neurons fire at the same time they create a change in the electric field we can measure from outside the head. When neurons fire, we can calculate the strength of certain frequencies and correlate to general states of mind.’ This brain activity is picked up in the headband by seven sensors—two on the forehead, two behind the ears and three reference sensors. “It tracks your brain wave activity in real time and sends it to your smartphone or tablet. From there, it gives you real time feedback to help improve your attention and decrease your stress,” she says.

Muse is basically a meditation tool. The point of most meditation techniques is to remain aware for long periods of time, but anyone who meditates knows just how difficult that can get. The nature of the mind is to wander and only advanced meditators, who have been practising for years, can remain focused. Muse is technology’s answer to that. It uses your brain activity to know whether your mind is focused or not. If the object of meditation is one’s breath and the practice is to remain aware of it, then as soon as the mind slips, Muse knows by reading one’s brain activity. The smart phone or tablet that it is attached to sends an audio cue that tells you to get your attention back to your breath. “With Muse, when your mind wanders, you hear it. The metaphor we use is that your mind is like the wind. As soon as it wanders, the wind picks up, and you instantly know how to bring it back,” says Garter. So what exactly is Muse reading inside our brain? “We are not looking at specific beta waves or alpha waves. We are looking at the overall brain activity. We do a little calibration exercise in the beginning to understand the model of your brain,” she replies.

But Muse has other applications as well, including medical ones. In her TED talk, Garter lists them: “Mayo clinic in the US is testing Muse with cancer care patients to reduce the stress of treatment. Avalon Hills, a clinic for women with eating disorders, use it with their anorexia patients. And seed schools in Baltimore, are using it to teach at-risk teens to manage their emotions. Over 50 hospitals and research institutions are engaged with with. A technology that was once expensive and available only in clinics, has now spread to the mainstream arena, demo- cratising access to our own brains.”

On Garter’s phone is an email she received just this morning from a woman who was on medication for anxiety problems. “After a few weeks of using Muse, she has noticed a massive difference. She tweeted about it and we reached out to her. She told us that her doctors are now reducing her anti-depressants,” she says.

The technology is only in its early stage and over the years there could be a wide variety of applications using the sensing of brain activity. “In the future, you will be able to diagnose disease more effectively. You will be able to see if pres- cribed medication is working or not. You will also be able to do neurofeedback for depression or ADHD,” adds Garter. For example, in depression, there is a difference between the activity of the left and right brain. Once the technology advances, doctors can use it to treat depression by regulating brain activity so that the difference between the brain’s two halves is reduced. Further in the future, the technology might even be able to completely change the way we function; if you are feeling hot, for example, a reading could change the ambient conditions in a connected smart-home.

Garten recounts a frequent question from the audience at her talks when the movie Inception released. “They would ask, ‘Can you do Inception with Muse?’ And the answer is ‘no’,” she laughs.