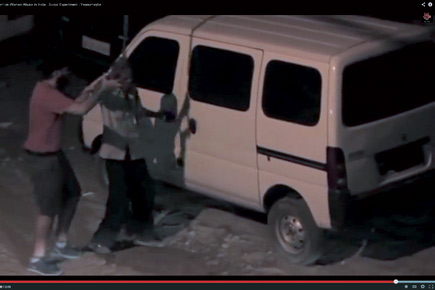 Earlier this month, amid the hysterical outrage in the press and social media over images of two teenaged girls hanging by a mango tree in a nondescript village in Badaun in Uttar Pradesh, a three-minute video on YouTube quietly surfaced on social media platforms that sent a chill down the spines of those who watched it. Reminiscent of the 16 Decemeber Delhi gangrape and other cases reported from various other cities in India of hapless women assaulated sexually in moving vehicles and then offloaded on streetsides, the video features a white van with tinted glasses parked in a dim and secluded spot at night. Barely a few seconds into the video, a scream emanates from the van. One hears a woman begging a man to let her go while the man threatens to shoot her. Passersby (who are not actors), in the meanwhile, simply walk by. One of them peers through the tinted windows, but still opts to leave, while a cycle- rickshaw stops for a little longer only to pedal away. Finally, a man tries to open the door by force and later tries to break the tinted glass with a brick, only to be stopped by another man who informs him that this was a ‘social experiment’ being shot and the voices heard from within the car were mere recordings. In another instance, a 78-year-old security guard shows up armed with an iron rod and tries to smash the windows—but is stopped again.

“I was just too tired of statements on social media about rape and violence. I wanted to see if people really meant it and how many people would actually come forward to help a girl in trouble,” says 17-year-old Sahil Bedi, who parked the van in Delhi’s Naraina Industrial Area at around 8.30 pm on a weekday and shot the video with his friend Prabal Narang. Titled Public Experiment on Women Abuse in India, this video may sound like a banal and somewhat forced school project, but is not. Uploaded on 6 June, the video went viral on various social media platforms and has been viewed over 2.1 million times so far, making it one of YouTube’s most-viewed videos. “It at least shows the true picture of how things are, and with the comments and number of ‘likes’ it has collected, I know that my video is making an impact on people,” says Bedi, who runs a YouTube channel called YesNoMaybe and essentially uploads prank videos as content for online media.

A little like prank videos, at least in their staging, such social experiments aim to see how people would respond if faced with a person in real trouble. Broadly, an act is staged in the middle of the street with a camera recording reactions of ‘real’ people to the situation portrayed by the act. The video is then uploaded online on YouTube and if it goes viral, YouTube ‘monetises’ the video—sharing revenue generated via the video based on the number of ‘views’ and ‘likes’ it gathers.

The video of a girl from the Northeast being subjected to racial abuse while passersby stay stubbornly apathetic, is considered to be one of the first such social experiments to have gone viral online. It appeared in February this year. Another clip that gained popularity recently is Kill the Poor, shot by a Delhi-based online content maker, YTV. The video draws people’s responses to a hypothetical scenario in which extermination of the poor is presented as a problem solver, simply to gauge attitudes to poverty and levels of sympathy for India’s have-nots. It was featured on the websites of international publications like The Daily Mail.

A Nirbhaya video shot by actor Varun Pruthi recreates the Delhi gangrape scene by having in in make-up that makes him look severely injured and bleeding. Through the seven minutes of the clip’s running time, Pruthi tries to stop vehicles in broad daylight, asking for help, but none pulls up.

Videos with somewhat ‘lighter’ social messages, like Free Hugs shot by Bedi and one about littering in public places by a channel called Awkward Unlimited, have been doing well. The months of May and June alone have seen at least half a dozen ‘social experiment’ videos being uploaded on the net.

Another offbeat experiment, put up recently and made by YTV, tackles the issue of homosexuality and public responses to it through the video of a girl who discloses to her mother that she is a lesbian. The message of the video, explains YTV founder Naman Sharma, is to get the nature of the problem across to viewers. “The biggest problem that young people face is lack of communication with parents. The video aims to tackle that,” says the 26-year-old, who founded his company only two years ago after completing a Phd in business and finance and a teaching stint in Melbourne, Australia. The video has already garnered as many as 3.6 million views.

Best buddies since school, Prince Thareja and Rahul Sharma (both 23, and the duo behind India’s first social experiment video) would casually bumble around the streets of Karala, a middle-class neighbourhood in north-west Delhi, playing video games on the net and laughing over the various prank videos available online, till they thought of making prank videos of their own and uploading them. This was nearly two years back, when Sharma was studying to be a chartered accountant while Thareja was looking at starting his own dance academy in Karol Bagh. While they formed a channel called Troubleseekers and began uploading prank videos online in partnership with YouTube, using a Sony digicam, they made their first ‘social experiment’ video in January this year that tackled the issue of poverty. The video involved hitting a poor person in public and seeing if people would react and try to stop them. While the apathy and lack of interest displayed was shocking, the video failed to make an impact online. The next month, following reports of racial abuse faced by people from the Northeast in Delhi, the duo decided to record a social experiment on it. “A friend from the Northeast [who also features in the video] suggested it,” says Rahul Sharma. The clip, shot in daylight in Hauz Khas, sees Sharma calling the girl names and harassing her. No one really helps out. The video went viral and received press coverage within days of its being uploaded. It has got about 2.3 million views and is still going strong.

“Social experiments have been pretty popular in the West,” says Rahul Sharma. Online reruns of ABC’ s primetime series What Would You Do? is the inspiration behind most such social experiments. “I have been an avid user of the internet, and if we can make prank videos and earn good money, why not make social experiment videos which can go viral and also make an impact?” argues Sharma, who has quit his CA training classes and has decided to devote all his time to Troubleseekers.

Thareja, who works with Rahul Sharma, runs his own dance academy. While he is reluctant to disclose how much money he makes on his videos (on account of a contract signed with YouTube), Sharma says he had worked out the math long ago. “If I had continued with my training and taken up a job, I would have had a package of about Rs 80,000 a month at the most. I can make far more than this with my videos,” he says. While he spends about Rs 1,500-2,000 on each clip, he uses his home bedroom as his office and his desktop PC as his workstation.

Hooked to the idea of making more such videos, Rahul Sharma says that he is dabbling with ideas like tacking child labour. “But they have to be made in an interesting manner,” he adds, ‘interesting’ here being something that will pull as many ‘likes’ as possible—something that cannot really be ignored in dealing with what works online and what doesn’t. Naman Sharma of YTV admits that some videos are aimed at generating viewership and revenue. The catch is in the numbers of ‘likes’ and ‘views’ one manages. While YouTube monetises videos on the number of ‘likes’ per thousand (unofficial estimates say between $50 and $400), the money lies in one’s video going viral and getting hits in the hundreds of thousands.

“If you are in the business of media, you will be concerned with the aspect of popularity because you want people to click on the thumbnail of your video and watch it. But in the end, if the message is positive and well-intentioned, I am willing to let that go,” Naman Sharma says. Capitalising on the popularity and impact of ‘social experiment’ videos, TV entertainment channel Bindass too has launched a ‘social experiment’ that dealt with public harassment of girls in cities like Delhi. The video was part of a three-phase campaign rolled out by the channel, which positions itself as ‘the voice of the youth’. While most shows, including the voyeuristic Emotional Atyachar, are geared towards increasing awareness and understanding relationships, Prashant Madaan, executive director of creative services at the channel, says that the video was launched in May to make a point. “We wanted to veer out of the zone of armchair activism and tell real stories of real people,” he says.

Admitting that some videos online might be carefully edited and hence manipulated, as “no-reaction” to a situation will always attract viewership, he cites the example of a video he recently updated with a bit of clickbaiting. While the video is called What guys should do to drunk girls and is about ‘doing the right thing’, both the thumbnail and title act as teasers to lure as much traffic as possible. “The idea is to get people hooked to the video, which is why the girl in the thumbnail is wearing itsy-bitsy clothes. The message, however, is positive and the twist in the story is amazing,” he says. The video has got over 3.7 million hits since it was uploaded in May this year. Interestingly, while the Kill the Poor video essentially capitalises on shock- value, it has only managed about 66,000 ‘likes’ since May.

In times of ‘clickactivism’, where voicing an opinion or endorsing a cause can be conveniently done by clicking the ‘like’ button online, social media has gained unbound popularity over the last couple of years. It now plays an important role in the way people organise public protests or rally for a cause, be it for the 16 December gangrape or the popular movement against corruption.

According to Ankita Gaba, a social media expert and co-founder of Socialsamosa.com, a social media content portal, such social experiments are popular because social media has thrown open opportunities for young people to express their ideas and thoughts in new ways.

“Earlier, such projects would be relegated to class projects carried out by media students and remain in the realm of discussion,” she says. “Social media has thrown the floor open to young people to publish their ideas and thoughts—and reach out to a large number of people.”