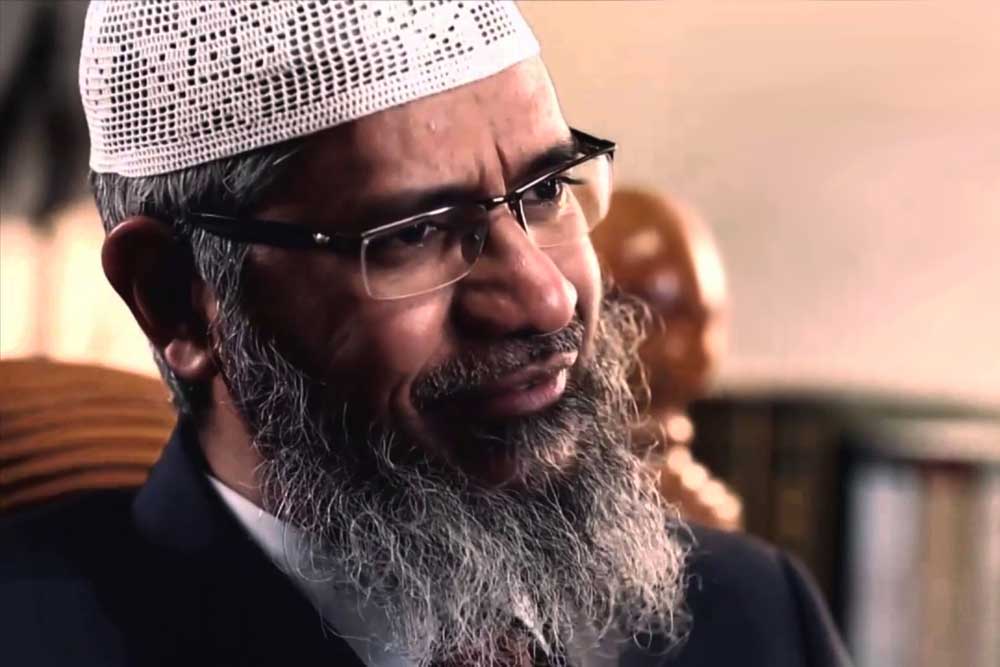 Ten policemen stand guard with lathis in their hands outside the office of the Islamic Research Foundation (IRF) in Dongri, Central Mumbai. The shutters of the establishment are shut. Located some distance from Hazrat Imam Chowk, this is the office of Dr Zakir Abdul Karim Naik, the controversial televangelist who is in the spotlight following the terror attack of 1 July at an upscale eatery in Dhaka. The cops have been told to keep tabs on who is going into and what is happening in this office. Since it has not opened from the time they took up vigil here more than a week ago, they have nothing to do but chat amongst themselves, speak on mobile phones or listen to music with headphones. Their presence does not even evoke a second glance from residents of the area. Dongri, a Muslim- dominated part of the city, has always had wealth, poverty and crime exist side by side. It was where the gangster Dawood Ibrahim lived before he fled overseas.

The 50-year-old Naik, a medical doctor fluent in English, is president of the IRF. The organisation’s website introduces him as a ‘dynamic orator on Islam and Comparative Religion who clarifies Islamic viewpoints and clears misconceptions with reason, logic and scientific facts’. Widely recognised by Muslims as the face of Peace TV, he is known to be a compelling if controversial speaker. Though he has been crisscrossing the country—even flying frequently abroad—to deliver lectures, the Indian authorities have largely let him be. It is only after the terror strike at the Holey Artisan Bakery in Dhaka that his speeches and videos have come under the lens of investigators. Two of the seven terrorists who hacked to death 20 people at the cafe had reportedly described themselves on social media as being under the influence of Naik’s preachings.

When the attack took place, the televangelist and his family were on an Umrah—or ‘mini Hajj’—trip to Mecca. As news spread of his name having been taken by the Dhaka killers, Naik tried to contain the fallout on his reputation by sending video clippings of his side of the story to the media. He then argued that a trial by media was being held against him, and broke off this engagement.

Naik’s channel, Peace TV, was set up in 2006. It reaches TV sets across the subcontinent and beyond, even in China, with his English speeches and sermons—many of which take the form of Q&A sessions—and claims an overall viewership of 100 million. The channel has Urdu, Bangla and Chinese feeds as well. He is popular in Bangladesh, South Africa and Saudi Arabia, and is said to be catching on in Sri Lanka. Police sources say that he has been gaining sway among Muslims in West Bengal and Bihar, though his appeal in Uttar Pradesh is less.

The preacher has been barred from the UK, Malaysia and Canada because his speeches are deemed to be espousals of hatred. Rubbishing this charge, his close aide Aarif Malik says, “If Dr Naik is such an influencer to make people commit acts of terror, then why have all those millions who listen to him not been radicalised? Listen to his speeches. He preaches peace. In fact, he denounces terrorists and their activities.”

As calls for Naik’s arrest grew louder, he reworked his plans to return to India. Instead of boarding an Emirates flight to Mumbai, for which he had a confirmed ticket, he decided to fly from Jeddah to South Africa, which is said to be where his Surat-born mentor Ahmed Deedat had migrated. Deedat, who passed away in 2005, was the founder member of the Islamic Propagation Centre International, and it was under his influence that Naik set up the IRF.

Through Peace TV, Naik reportedly reaches a million viewers around the world. The channel has feeds in English, Bangla and Chinese

Those who know Naik say that his day is spent on recordings, writing, prayers and interactions. “They are devout followers of Islam and never step out of line ever,” claims an acquaintance of his who doesn’t want to be named. Dharmesh Thakkar, a journalist who interviewed Naik about six years ago, found him to be a hypnotic speaker: “The audience was simply mesmerised by his speech. At one point, I too felt swayed, but then my own reason prevailed.”

Over the last two decades, Naik is estimated to have delivered over 2,000 public talks, a large number of them in African and Gulf nations. In 2009, Naik was ranked No 82 in a list of ‘100 most powerful Indians’ published by The Indian Express. From 2011 till 2015, he found slots in the top 70 on annual lists of ‘500 most influential Muslims in the world’ put together by Georgetown University in the US.

Unlike Muslim clerics, Naik dresses in Western formals, though he sports a beard and wears a white cap. “He is a very educated, modern man,” says a middle-aged follower of his, “His speeches are easy to understand. He compares the teachings of other religions with Islam and it helps us understand better. Dr Naik is my mentor and I will not hesitate to pick up cudgels if anyone harms him.”

That his words inspire terrorists has been a recurring charge for many years. Yasin Bhatkal, incarcerated for various bomb blasts across the country, had told investigators of his frequent visits to Dar-ul-Qitab Sunna Library at Karimganj in Bihar’s Dharbhanga area. In this library, the police found a collection of Naik’s books, videos and photographs.

The preacher’s main reach, however, is via television. In 2014, four youths—Areeb Majeed, Fahad Shaikh, Aman Tandel and ShaheenTanki—from Kalyan in Maharashtra’s Thane district, had vanished. After their families filed ‘missing’ complaints, the police discovered that they had gone to Syria to join Islamic State militants. Except Tankha, who’d failed his Class 10 exams, all were from relatively well-off families and had studied engineering. Majeed, who contacted his family and returned to India, is in police custody now and his interactive sessions with intelligence authorities have revealed that all four were avid viewers of Peace TV. They had watched Naik’s videos and read his books. Though the state intelligence and National Investigation Agency had launched a probe of IRF and Naik, nothing of note came of it.

“In 2006, Naik was questioned in an arms haul case,” says KP Raghuvanshi, then head of the state’s Anti Terrorism Squad (ATS). This was after the arrest of Feroz Deshmukh, a librarian of IRF, for his connections with Abu Jundal, a functionary of the Lashkar-e-Toiba (LeT) who is currently in jail, facing trial. “Our investigations into the Aurangabad arms haul case led the ATS to Firoz Deshmukh. He was found to be [another] key functionary of the LeT and the link between two other LeT operatives Rahil Shaikh and Zabiuddin Ansari (alias Abu Jundal). They were the co-accused in the arms haul case,” says Raghuvanshi.

Both escaped to Pakistan via Bangladesh. “Abu Jundal taught Hindi to Ajmal Kasab and others who attacked Mumbai on 26/11. The ATS probe revealed that both Rahil and Jundal met regularly in the IRF office in Dongri,” says Raghuvanshi. The ATS had summoned Naik for his statement, but was unable to pin anything concrete on him.

Raghuvanshi believes Naik is a very clever man who is politically well connected. “The ATS was bogged down with cases and we did not have enough time to question him and probe deeper. We let him go. Since then, we have never questioned him in detail,” says the former ATS chief.

IN A MEDIA statement issued via email, Naik writes, ‘The media is the most important weapon in the world. It can convert a hero into a villain and a villain into a hero. I am shocked at the media trial on me regarding the recent terrorist attack that took place in Dhaka on July 1. Most of the clips shown on the television of myself are either out of context, half statements or doctored. So are my statements in the print media. If time permits and God willing, in the next few days, I will give replies to some of the major allegations on video and give it to the media as well as put it up on social media as well as other platforms so that the original answers are also available if the media misutilises it.’ Naik adds that not a single official Indian agency has contacted him for his clarifications on this issue and that he does not support terrorism.

The IRF and Naik were also on the ATS radar in the investigation of the 2002-03 bomb blasts in Mumbai, but no hard evidence was found. Former Mumbai Police Commissioner and incumbent BJP MP Dr Satyapal Singh has said that he’d sent a report to the Maharashtra government in 2008 questioning the funding of Naik and his Foundation. However, no probe was conducted.

In Mumbai, the Raza Academy has launched a public stir against the IRF and Naik. The first of its protest gatherings was held in the Pydhonie area of Mumbai. Sayed Noori, founder and general secretary of the Academy, has demanded a ban on Naik and his TV channel. “What the IRF and Naik teach is Wahhabism [an interpretation of Islam preached by followers of Abdul Wahhab] in schools run by them, which is a very dangerous for such young minds,” in Noori’s words.

Firoze Mithiborwala, a prominent member of Mumbai’s Muslim community, has been asking for the state government to maintain a strict watch over the activities of Naik and the IRF. “Zakir Naik does not believe in secularism. He only believes in Wahhabism and not the 73 sects of Islam. The government must probe the curriculum of the IRF’s Islamic International School,” says Mithiborwala.

According to Noori, Sunnis, Shias and secular Muslims have raised their voice against the Wahhabiyat being spread by Naik. Several people also allege that IRF is funded by money from Saudi Arabia and other Gulf countries.

Muslim political leaders like Samajwadi Party’s Abu Asim Azmi and AIMIM’s Asaduddin Owaisi, however, have expressed support for Naik. “He is known across the world for preaching peace,” Azmi has been quoted saying.

Raghuvanshi feels that Naik will probably test the waters in India before returning, and says, “I do not expect him to be back for some time.”