Every year, pilgrims walk extraordinary distances, many of them even walk over 500 km, to reach Pandharpur. 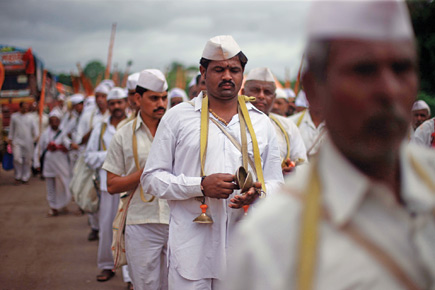 Every year, pilgrims walk extraordinary distances, many of them even walk over 500 km, to reach Pandharpur.


Twenty-four-year-old Atul Kulkarni is a marketing professional in Pune. He leads a busy but predictable life. The sameness of each day started to get to him. He decided that he had to do something he had not done before. Atul dialled a friend’s number and packed a haversack with a bottle of water and some orange cream biscuits. They set off on the spiritual walk to Pandharpur, in Maharashtra’s Solapur district, undertaken in the monsoon months by pilgrims known as Warkaris. They are part of a centuries-old religious movement associated with Maharashtra and considered to be ‘karma cleansing’ for those who undertake it.

The walk, known as wari, takes place in the monsoon months after the sowing season and continues until the harvesting of crops. Every year, Warkaris walk hundreds of kilometres—some, even 500 km—to Pandharpur from different parts of Maharashtra, armed with only a single change of clothing and plastic sheets for protection against the driving rain.

For those like Atul, it is a revelation, as the Warkari movement is driven by the older generation. Women are equal participants in this walk. Age is not a deterrent and pilgrims above 65 years are a common sight. They are all poor farmers who undertake the walk with no food or money and depend on the goodness of the people they meet along the way. A majority cannot even afford to buy food along the wayas they make the long trek.

People who believe in the Warkari movement are increasing. Many of them have started either walking or contributing in terms of food items, hot beverages, raincoats, new clothes, slippers etcetera, as part of a fulfillment of their wish (mannat).  “There is an entrenched belief that you must feed a Warkari. It is good karma,” says Dr Prakash Khandge, reader at the Folk Arts Department of the University of Mumbai. “A Warkari will not lack food, clothing or any other necessities as people line up along the route and provide everything for them.” Dr Khandge has done considerable studies on the walk and, to his credit, has also published papers on the subject.

Atul Kulkarni is a fresh convert. “I was never attracted to this movement before,” he says. “I had seen it and had only noticed the inconvenience it caused. Having experienced it first hand, I can say I was wrong. When you walk with Warkaris you forget worldly concerns. There is no ego and nothing seems more important than completing the walk.” Atul goes so far as to say the walk has changed his life.

Jeans-T-shirts and salwar-kameez is the attire of modern day walkers like Atul. Warkari men, on the other hand, wear white dhotis, kurtas and a Gandhi topi. Women Warkaris predominantly wear the navwari (nine-yard) sari. A majority of Warkaris are burdened by debt and have not had new clothes in years. When you look closely at their attire, you can see it is held together by coarse hand stitches. In any case, clothes do not matter on this journey. All that is sought is “purification of one’s karma”. It is also an event for social and religious mingling.

The emergence of the Warkari movement is credited to the regime of the Yadava Kings in the 12th century, particularly that of Ramdev Rai Yadava. This movement had a great follower in Sant Dnyaneshwar, one of the most revered saints of Maharashtra. Lord Vitthal of Pandharpur, an incarnation of Lord Vishnu, is the popular deity of Warkaris. Hence the long and arduous trek to Pandharpur.

The pilgrimage is popular across religions. One of the well-known Warkari leaders was an 80-year-old Muslim lady, Jaitunbi. For 62 years, Jaitunbi kept her annual date with Lord Vitthal. She died in July this year during the pilgrimage.

Jaitunbi, it is said, braved opposition from both Muslims as well as Hindus when she became a devout Warkari. One does not know if she got the life she wanted, but she died the way she wanted.

The wari tradition of carrying the symbolised holy footwear (paduka) of Sant Dynaneshwar in a palanquin (palkhi) from Alandi (in Pune district) to Pandharpur was started by the late Haibad Baba. This has today become an integral part of this spiritual march.

In the old days, saints in Maharashtra often visited the holy shrine of Vithoba in Pandharpur. Devotees started carrying the padukas of saints to this holy town. Warkaris thus comprise devotees of saints from different strata of society who had lived in Maharashtra.

Considering the distance to be covered, Warkaris walk fast.

Meera Deshpande, a 43-year old homemaker who walked for the first time this year, says, “It is difficult to match the speed of the Warkaris. You are in a trance. I was not sure I could do a 30-km trek from Alandi to the heart of Pune city. I joined the walk with my cousin Chhaya after much apprehension, but it was an amazing experience.”

Chhaya Deshpande, a 50-year-old homemaker, had been keen on the pilgrimage for a long time but could only do it this year. “Most of the Warkaris wore worn-out footwear. Some of them walk barefoot. I felt guilty about my comfortable sandals. My feet were protected, the Warkaris had nothing.”

Both Meera and Chhaya were worried that their legs would pain, or worse, they would get an injury. It did not happen. “The walk was invigorating,” says Meera. Both are looking forward to next year’s march.

The participation of the state’s middle and upper middle class in large numbers is a new phenomenon, dating back to just over a decade.

“The more problems people face, the more they will do to find calm. Walking in the wari now is more about seeking solutions to their problems than being a firm believer in the Almighty,” says Abbaji Nanal, from a Satara village. He and his wife Sushilabai have been walking from their village to Alandi and then to Pandharpur for 35 years. “We were poor when we started walking and we continue to be poor. But we are happy and peaceful—that is the blessing of the wari,” says Nanal.

Baban Pachpute, Maharashtra’s minister for forests, has been an active participant for a number of years. Accompanied by his bodyguards, Pachpute joins the throngs as they tread towards Pandharpur. Though this is the only movement that has not been impacted by political happenings through the years, it is not due to lack of attempts. Every election, political parties have tried to field prominent Warkari leaders as candidates, but the idea has found no acceptance amongst them.

The local media houses send along reporters to cover the event from start to finish. Some nutritionists have been trying to popularise the ‘Warkari diet’. It includes jowar or bajra bhakri (roti), dal and a single vegetable. The trim looking Warkaris eat frugally, as overeating can hamper their speed. “We walk fast, otherwise we will never reach Pandharpur,” says Sakhibai Shewale, a 60-year-old from Junnar in Pune district.

The journey of the walkers is interspersed with spiritual entertainment. They halt for the night at prominent temples along the route and sing kirtans and bhajans for the better part of the night. The ringgan sola, comprising traditional but not popular games, is a visual delight. The high energy games that Warkaris play are seen only during the ringgan sola. The event is announced well in advance to enable those interested to reach the pre-decided venue.

“I have never seen anything like it. The same men and women who look frail and malnourished run so fast,” says Harshada Velankar. “Even my mother has never seen such games in her youth. They are so energetic. Warkaris just do not tire.” The Warkari tradition is handed down from one generation to another. Over the years, the Warkari movement has incorporated followers and methods of various eras. Currently, about 40 palkhis of various saints are brought to Pandharpur by various Warkaris from the places where these saints took their ‘samadhi’. [left for the hereafter]

The Warkari movement includes a number of specific principles. Alcohol is forbidden (keep walking, but no Johnnie Walker). Tobacco is forbidden. Only vegetarian food is allowed on Tuesday, Thursday and other auspicious days. The holy scriptures have to be read.

Dr Khandge says, “The Warkari tradition has impacted every aspect of the life of its followers. Simplicity is their way of life. They believe in individual sacrifice and abstinence.” And walking.