Why Is Hooda Afraid of the CBI? 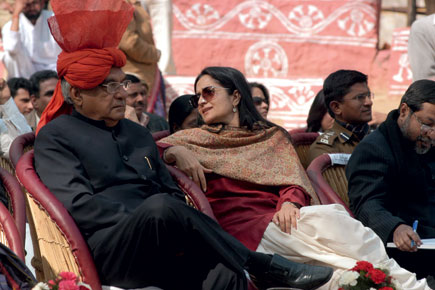 
Sanjiv Chaturvedi did’t see it coming. In the beginning, the whistleblower IFS officer thought he was fighting petty private interests skimming off taxpayers’ money and flouting wildlife norms. Five years on, he is up against pretty much the entire Haryana state machinery.

Last December, the Central Vigilance Commission (CVC) wrote to the Ministry of Environment and Forests (MoEF) that the CBI was ready to probe plantation scams worth several crores, a number of violations of forest and wildlife laws, and the motive of the Haryana government in slapping fabricated charges on the whistleblower who had flagged off these irregularities. The CVC advised the MoEF ‘to take up the matter of registration of FIR with the state government and subsequent transfer of the case to the CBI’.

For two months, Minister for Environment and Forests Jayanthi Natarajan sat on the CVC memorandum. After all, the corruption cases in question involved Haryana CM BS Hooda’s office, his cabinet colleague Kiran Choudhry, and nearly a dozen IFS and IAS officers. Then, after Natarajan received a few calls from the media, her ministry wrote to the state government last week, not asking it to register FIRs, but seeking its opinion on the issue.

Over the past five years, the Haryana government has made several attempts at defending itself against Chaturvedi’s charges. Each time, the central authorities have found its defence inadequate, even “misleading”. In fact, when the case was referred to the CVC in June last year, MoEF secretary T Chatterjee noted why “it may not be prudent to request the state government to further investigate as their stand is quite clear,” which was “rhetorical…without any documentary support”.

A Congress minister deferring to the clout of a party strongman is not surprising. What is shocking is the extent to which the Hooda government has gone to scuttle a probe into what seemed, in the beginning, to be departmental cases of embezzlement and violation of rules in private interest. But surely, Hooda knows better because his government has been recklessly bending rules to hound the whistleblower.

I met Sanjiv Chaturvedi in August 2007, just a week into his suspension. As a Divisional Forest Officer (DFO), he had annoyed the then forest minister Kiran Choudhry by broaching two instances of irregularity and corruption—construction of an irrigation canal through Saraswati wildlife sanctuary without statutory clearance, and investment of public money in a herbal park on land belonging to, among others, an MLA who is now Chief Parliamentary Secretary (Forest).

So blatant were the violations that PC Rawat, then Principal Chief Conservator of Forests (PCCF) of Haryana, could not issue an outright denial. “Not a big violation” was all he said on camera. Chief Wildlife Warden RD Jakati and his fuming minister refused to even go on record.

Soon, NGO Wildlife Trust of India went to the Central Empowered Committee (CEC) of the Supreme Court in the sanctuary case. In July 2008, CEC member-secretary MK Jiwrajka agreed, in his report, that ‘the construction works were started a) without obtaining approval under the Forest Conservation Act; b) in violation of the provision of the Wildlife Protection Act and c) without obtaining… permission from the honourable Supreme Court.’

Yet, Jiwrajka absolved the accused and closed the case because “on a suggestion made by the CEC, the irrigation department has voluntarily deposited Rs 1 crore…for undertaking conservation and protection work”. This, after the Haryana government had spent Rs 2.2 crore to pay lawyers in the case to defend the violations.

The CEC’s mandate, however, does not allow it to give a clean chit, or offer compromise solutions, to anyone found guilty. The apex court’s notification on its terms of reference clearly states that the CEC will ‘place its recommendations before the [Supreme] Court for orders’.

In April 2008, NGO Ekta Parishad moved court in the herbal park case. In August, the Prime Minister’s Office sought a response from the state. The Hooda government did not oblige. Instead, it transferred the management of the private land to the forest department in February 2009. The CEC in its October 2009 report exonerated the state. But transfer of management under Section 38 of the Indian Forest Act, 1972, does not affect ownership of the land. The case is still with the Supreme Court.

Chaturvedi’s suspension order, approved by the CM in August 2007 without seeking his explanation, did not cite any grounds. When the state failed to substantiate the order in a mandatory detailed report to the Centre, the MoEF concluded that the suspension was “not sustainable, as the grounds…were not found to be justified”. The President of India revoked the suspension in January 2008.

But Chaturvedi had also been served a chargesheet by the state government soon after he was suspended. Even after his suspension had been revoked, Haryana did not withdraw the chargesheet. In August 2008, then principal secretary (forest) recommended that the charges be dropped because Chaturvedi was only doing his duty. But forest minister Choudhry returned the file to PCCF Rawat’s office for further comments. It would stay there for 15 months—that is, till Choudhry was forest minister.

Suspension lifted, Chaturvedi waited for six months before the state put him in a non-cadre post, but the move was stayed by the Central Administrative Tribunal. He was finally posted as DFO, Jhajjar, in January 2009.

Within one month in Jhajjar, he unearthed a fake plantation scam worth several crores. A chargesheet was served on 40 forest staffers, and 10 were suspended. Suspecting involvement of senior officers, Chaturvedi insisted on a vigilance probe. Instead, the Chief Minister’s Office had him transferred to Hisar in August 2009.

Two weeks in Hisar, Chaturvedi unearthed yet another plantation scam, and confronted his seniors by repeatedly seeking permission to initiate criminal proceedings for the embezzlement of public funds. Things came to a head in January 2010 when Chaturvedi sealed a large plywood unit that had, in collusion with senior forest officers, deposited Rs 26,000 instead of Rs 22 lakh, as licence fee.

The Chief Minister’s Office responded by declaring his post vacant when he was away on official training for 18 days in March 2010. After a month without a posting, Chaturvedi was made DFO (production) in the same division.

Captain Ajay Singh Yadav succeeded Choudhry as the state forest minister after the November 2009 Assembly polls. PCCF Rawat had retired. In the next five months, two successive PCCFs and then Financial Commissioner (forest department) recommended that the charges be dropped against Chaturvedi. The new Forest minister was unmoved.

In April 2010, Keshni Anand Arora, a trusted officer of Kiran Choudhry’s in the tourism department, became the new Financial Commissioner (forest department). On Arora’s recommendation, an inquiry officer was appointed in May 2010, nearly three years after the chargesheet was slapped on Chaturvedi.

The inquiry meant that Chaturvedi would not be promoted, sent on deputation or even be allowed to quit the service. His next promotion was due in months. After nine years in the IFS, he was keen to leave Haryana on a central deputation. He was already saddled with a range of false cases, from the ridiculous (stealing a Kachnar tree) to the alarming (abetment to suicide). Even his personal life was not spared and he was described as a ‘person of a (sic) dubious character’ in the chargesheet.

His back against the wall, Chaturvedi appealed to the MoEF in May 2010 but got no response. By August, Chaturvedi was desperate and wrote to the President. In September, the Cabinet Secretariat asked the MoEF to take ‘appropriate action’ and the ministry set up a two-member inquiry committee.

The inquiry ran into several hurdles. The IFS division in the MoEF tried to undermine the probe by issuing a ‘note’ instead of an ‘order’ while instituting the committee. Then, asked to comment, para-wise, on Chaturvedi’s charges within ten days, the Haryana government took 51 days to reply. Since an inquiry was already going on, the voluminous reply argued, the Centre would have to ‘kindly wait’.

It did not. Additional Inspector General Shally Ranjan submitted her report on 8 December, recommending that the Central Government quash the ‘fabricated chargesheet’ against Chaturvedi and send a strong directive to the state asking it to order a CBI inquiry ‘to prosecute the real culprits’. However, Inspector General (forest department) AK Srivastava, Ranjan’s senior colleague in the panel, and MoEF Secretary Vijai Sharma subsequently dropped the word ‘CBI’ from their file notes.

Then Forest Minister Jairam Ramesh decided to give the Haryana government one more chance. On 18 January 2011, the state reiterated its stand, without furnishing any new details. The next day, the MoEF issued an order. The President quashed the chargesheet against Chaturvedi.

Snubbed twice by Presidential orders, the Hooda government was still unfazed. In March 2011, a belligerent state forest minister Ajay Yadav wrote to Ramesh, requesting him to ‘institute an enquiry in the matter of quashing the chargesheet and especially the tone, tenor and contents of the enquiry report’.

Around the same time, Chaturvedi also wrote to the MoEF, seeking a CBI probe into the irregularities he had been pointing out all along. In April 2011, the ministry sent a confidential note to the CEC seeking its opinion.

The MoEF inquiry report had recommended that the 2007 CEC order in the Saraswati wildlife sanctuary case be immediately challenged in the Supreme Court as it ‘rendered the punitive clauses’ of forest and wildlife laws ‘infructuous’ and could set a bad precedent.

Citing these ‘adverse criticisms’, CEC member-secretary Jiwrajka refrained from offering any ‘advice in the matter’ and added that ‘the decision taken by the CEC’ in the Saraswati wildlife sanctuary case ‘does not preclude either the MoEF or the state from initiating penal action’ or approaching the SC.

In June 2011, MoEF secretary Chatterjee noted that ‘the documentary evidence submitted by Shri Chaturvedi is robust and in clinching support of his allegations’and that there was ‘need for an independent investigation’. Accordingly, Ramesh replied to his Haryana counterpart’s letter, dismissing his protestations on the quashed chargesheet and informing him that the MoEF was seeking the advice of the CVC on an investigation into the charges made by Chaturvedi.

The Haryana government was not ready to give up yet.

A few days after receiving Chaturvedi’s dossier of allegations, Prabhat Kumar, director, CVC, wrote a note on 13 July to the MoEF, observing that Chaturvedi’s complaints were ‘serious in nature’ and that the ministry should take up the issue of his protection with the state. The same day, in another note for his boss Additional Secretary Hari Kumar, he concluded that a ‘CBI inquiry may not be required at all as the matter has already been considered by CEC and the elements of corruption angle (sic) is not prominently there’. The Additional Secretary agreed.

Vigilance commissioner R Sri Kumar was not convinced and decided to seek the opinion of the CBI. On 1 November, the CBI said it was willing to probe all charges, but the letter was acknowledged by Prabhat Kumar’s office after a month. On 16 December, the CVC finally wrote to the MoEF.

Chaturvedi is still waiting. After 10 transfers since 2007, he is still very much a pariah in the Hooda administration and does not feel safe in Haryana. He is waiting for a central deputation, for a CBI probe, for Union Minister Jayanthi Natarajan to do what is right.

It has been five years.