...for your intervention that could save it from extinction, now that the threat is real indeed. 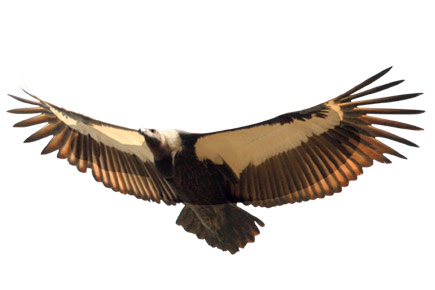 …for your intervention that could save it from extinction now that the threat is real indeed.


The Tumeria Dam at the periphery of Corbett National Park is a place of rare beauty. With a vast reservoir in the middle of the complex, it is flanked on three sides by dense forest and on the fourth by a cluster of Van Gujjar villages. The silence is soothing and disquieting at the same time. A monitor lizard scrambles up a grassy knoll. A couple of lap wigs, in their trademark yoga-like position, twitter behind us. We almost forget that this is prime tiger country.

From these parts comes a rare piece of good news for India’s beleaguered wildlife. The vulture, which is under grave threat with almost 96 per cent of its domestic population gone, is making a slow but significant comeback here. India has eight species of vultures, and almost each existed in large enough numbers to keep the flock going strong from generation to generation. Over the last decade or so, however, the population of vultures has dwindled. So sharply, that the bird is now a Schedule I endangered creature, sharing space with the Royal Bengal tiger and Great Indian bustard in the verge-of-extinction hall of fame. Spotting the scavenger is not easy.

We have been on the road for three hours, and just when we are ready to give up, we run into a gangly young man on a motorcycle. His name is Muhammad Sayid, a member of the Van Gujjar tribe, a semi-nomadic group which has inhabited the forest area for hundreds of years. He is generous with his time and redirects us to his village about 5 km away, just behind the dam’s embankment near the main forest.

Since it is the vulture we are after, it is only appropriate that we wait patiently. So we do. We are rewarded in due course. After three quarters of an hour, the familiar grace of these fliers is seen high above in the sky. Circling above us, there is one, and then many. We watch, mesmerised, as the birds commence their characteristic spiral descent. It’s the sort of sight that stays with you. Their legs, recessed within their feathery bodies until now, suddenly emerge—like the undercarriage of an aircraft preparing for landing—and they perch themselves on tree tops with a thwack, some 100 feet above the ground.

Again, they are no longer easy to spot, camouflaged by wood, except for their necks, which stick out in white or red depending on what kind of vultures they are. At rest, the bird presents a captivating picture, its long neck, sharp beak and shining plumage striking a decidedly regal pose.

This flock in the Corbett National Park is cause enough for the hope, however slim, that these amazing birds will remain with us for a while yet. And Corbett is not alone. In the mountain desert of Lahaul Spiti, about 200 bearded vultures have been spotted recently. Similarly, a large flock nests on the Nepal border in the district of Bahraich in Uttar Pradesh.

So, is the vulture staging a grand recovery, or are these flocks too little too late? “Any vulture sighting is obviously interesting and important,” says Asad Rahmani, renowned ornithologist and director at the Bombay Natural History Society. “The key thing is that they need to be nurtured, protected. The numbers are too small yet to call it a full scale recovery. What the revival in numbers does is signify that the wild population is sturdy and oriented towards survival. Only with vigilant protection can they be nurtured. For that to happen, the vulture will first have to be a priority with the forest administration. It’s not.”

He is right. Although banned, diclofenac is still readily available. This is an anti-inflammatory painkiller given to sick cows which happens to be toxic for vultures, and its growing use since the mid 90s has been the leading cause for their decimation in India. Meloxicam, its replacement drug that has been tested for vulture safety, is also selling in the market but is still not very widely used. This is partly because Chinese formulations with a different composition but the same effect as dicofenac are also widely available; since they are cheaper, they find a large market with farmers. This makes the task harder.

The drug has Rehmani worried. “Shielding Indian vultures from the drug diclofenac is the largest regulatory challenge for Indian bird lovers,” he says, “The lack of regulation threatens the very positive development of the new flock of vultures that we now see in certain pockets. The fact is that the vulture is teetering on the brink, and if it does not become a priority now, it will never become one.”

The vulture is particularly vulnerable to such poisoning because of its eating habits. If it eats cattle dosed with the drug, the bird suffers rapid renal failure and consequent death. Another threat for vultures is rabies. If they eat, as they often do, a rabid dog or dhole (the Indian wild dog), they catch the disease and die. And, as if these problems are not enough, a new threat has emerged. A report by the Centre for Cellular and Molecular Biology has revealed that vultures are falling prey to an avian version of malaria. This is a completely new threat to these birds, and very little has been done to counter it so far.

But then, drug poisioning is the bigger problem. The best that can be done under the circumstances is the carrying out of an awareness campaign to guide villagers on appropriate medication for their cattle. Everyone who lives close to nature would understand the perils of disturbing an eco-system that has been tested down the ages. Without vultures, nature’s mechanism for corpse disposal in the wild would fail. Convincing people of this should not be too hard.

Ecological rationale is one thing, motivation is another. Saving the vulture is a big challenge because, unlike the tiger, it is not a ‘sexy cause’. The bird has an image problem. “When you go fund raising and talk about the vulture, you get blank looks from donors,” sighs the manager of a wildlife trust on condition of anonymity, “With the tiger, you often get blank cheques. The desperate truth is that no one really cares for this bird. Even the Government’s efforts are half hearted. It really boils down to the fact that vultures are not sexy enough. And will never be.”

One community that the vulture conservation movement may want to seek help from is India’s Zoroastrians. Known to be generous donors, they have a direct stake in the survival of this bird. Traditional Parsi death rites, in accordance with religious injunctions against cremation and burial to preserve the sanctity of natural elements such as fire and earth, involve leaving their dead at the Towers of Silence—such as those near Mumbai’s Malabar Hill—for vultures. Over the past two decades, the disappearance of these birds has been posing a threat to Parsi tradition, and this is the reason that the Parsi Panchayat has taken up the issue of vulture conservation with a sense of utmost urgency.

It has been several years now that the real cause of the dwindling numbers has been identified. That diclofenac is the culprit was demonstrated as far back as in 2003-04, when scientists led by Lindsay Oaks of the Department of Veterinary Microbiology, Washington State University, fed 20 vultures in Pakistan carcasses of buffaloes which had been given the painkiller. While 13 vultures died, the rest survived the dose. That the drug was a menace was established by this study, but it was also clear that fatality could depend on other factors as well.

The notable point is that the vulture is not yet extinct, and the growth of flocks in several pockets of the country is reason enough to hope that the eradication of the killer drug would hasten a full-fledged revival. “The vulture’s comeback here is welcome news, but will need careful monitoring and nurturing,” says Ajay Ghale, a naturalist who works on the bird’s conservation at Corbett National Park, “One of the difficulties with vultures is that they are very slow in terms of reproduction. They lay about three eggs once every year—they are not a fast-breeding bird. The vulture faces many threats, and ironically more effective waste disposal in Indian cities is one of them. It has deprived vultures in urban spaces of opportunities to scavenge. In Corbett, however, the protection of the park and the food supply in buffer zone villages can allow for sustained population growth.”

Another effort that may help in bringing the bird back is captive breeding. It raises hopes that vulture populations can slowly be restored this way. Chris Bowden, manager of the Asian Vulture Programme run by the UK-based charity Royal Society for the Protection of Birds, reported recently that wildlife experts are refining their expertise with captive breeding, and a handful of birds have been successfully raised. It is not easy. The first success came only in 2009, and that too after many years of trial.

All said, wildlife lovers are hoping that the rise in their numbers in places such as Corbett will raise interest about the tragic story of the vulture’s sudden decimation. It may also lead to their eventual sustainability in the wild in numbers large enough to perpetuate their existence and role in the eco-system. Without a concerted effort, though, seeing this magnificent bird in flight would be just a memory of days gone past.

The future of this splendid bird hangs in the balance. For a bird known for its endless patience, it is sad to see time running out for it.