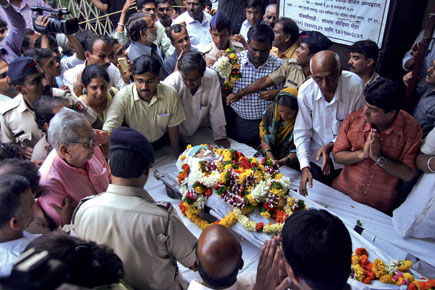 
On the morning of 20 August, a couple of hours before rationalist Dr Narendra Dabholkar fell victim to bullets in Pune, a more popular figure, astrologer Jayant Salgaonkar, died of old age-related health complications in Mumbai. Though Salgaonkar had a much bigger fan following—including renowned journalists and editors—the media chose to give his death just a passing mention. Few media houses wanted to be caught on the wrong foot on the day a rationalist was killed.

Salgaonkar, the founder of the Marathi almanac Kaalnirnay, a must-have in every Maharashtrian household, was no friend of Dabholkar. They represented two diametrically opposed viewpoints, each believing he held an edge over the other. Yet, when both died on the same day, it wasn’t surprising to see an otherwise sought after Salgaonkar fade away silently.

Such was Dabholkar’s personality. As the founder of the Maharashtra Andhashraddha Nirmoolan Samiti, an anti-superstition movement, he eclipsed the powerful and well-connected. So forceful were his arguments that there were few who could match his reasoning. And even among these few, there weren’t many who wanted to get on the wrong side of him or get into an argument.

Born on 1 November 1945, the youngest among ten children, Dabholkar, a resident of Satara in western Maharashtra, was a general practitioner of medicine. In his family, as in many others, religious practices formed an important part of life. His questioning of religious rituals within the family did not begin until his late teens when he urged his family to give it all up. His impassioned pleas earned him the reputation of a rebel in those formative years.

Though Maharashtra was going through a period of social change, Dabholkar’s task—ridding society of superstition—was not easy. Like India’s first Prime Minister Jawaharlal Nehru, Dabholkar too believed that the future belonged to science and those who made friends with it stood a better chance. There were takers for his belief, but they were outweighed by those who believed that the Universe is a creation of a god who controls every event on Earth.

Followers were difficult to come by and those there were lacked the intensity to help him bring in change. Until 1983, he practised medicine. His patients were the first people he decided to bring into the fold of social reform. Those who knew Dabholkar say he wanted quick results and was unwilling to convert to an opinion that diverged from his own. Many say his opinions were far too radical for most people.

A glimpse of this can be gleaned from a press conference Dabholkar held in the mid-90s at the Patrakar Sangh in Pune, close to where he was recently gunned down. “Why should women wear mangalsutra and sindoor on their foreheads? It will not increase the lifespan of their husbands. They should just stop wearing both,” Dabholkar had told the media. Predictably, women did not take kindly to such a radical thought and the cause died a natural death.

Dabholkar’s biggest battle has been trying to get several Maharashtra governments to pass the Superstition Eradication and Anti-Black Magic Bill which would have brought under its ambit a host of religious practices, rituals and related acts as forbidden by law. Though the bill was brought in for seven consecutive sessions of the Maharashtra Legislature, it did not even come up for discussion. The political class, with its strong affiliation to various spiritual gurus and fondness for magic stones, talismans and charms, hated both the bill and Dabholkar. Since many believed their political careers were intricately woven with the ascendency of stars and predictions of gurus, antagonising them was ruled out. Dabholkar was easier to offend.

His worst opponents were those from the BJP, Shiv Sena, the Warkari sect (followers of Dynaneshwar and Tukaram), Sanathan Prabhat, Hindu Janjagran Manch, Patit Pawan Sanghatana and Bajrang Dal. They collectively felt that the bill advocated by Dabholkar would adversely impact Hindu culture, customs and traditions. He had been warned, threatened and attacked many times by activists of these outfits. Interestingly, he was also closely associated with Christian rationalist Sanal Edamaruku, who is in forced exile in Finland, in hiding from Christian fundamentalists in India.

There is nobody else of Dabholkar’s stature in Maharashtra who can encourage constructive analysis of religious traditions and customs, who can agitate against harmful superstition and its practitioners and suggest alternatives. Dabholkar’s death is a setback to those like actor Sriram Lagoo who used the rationalist’s platform to debate the need to retire God. Dabholkar’s home state Maharashtra perhaps boasts the largest number of godmen in India.