Under Pressure in Pakistan

Victimised for their faith, Hindu refugees from across the border say they do not want to return 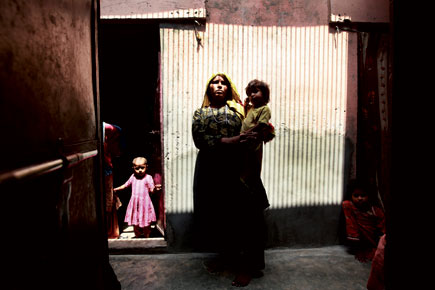 Victimised for their faith, Hindu refugees from across the border say they do not want to return


By the time her visa arrived, Bharti had given birth to a baby boy in Pakistan’s Sindh province. There was no time to apply for his passport. The visa for India, for a holy dip at the Kumbh in Allahabad, had been hard to come by. Not everyone had been as lucky. Many others who had applied did not get one. Moreover, her family could pay for the visa only because their Hindu neighbours had collected money and given it to them. She knew they would get no second chance. So Bharti took her newborn in her arms, and, together with her labourer husband and six other children, reached the last checkpost in Pakistan at its border with India’s Rajasthan.

“Where is the baby’s passport?” demanded the guard at the border. “He was just born. Please have mercy on me, let him go,” Bharti pleaded. But the baby was snatched from her arms and given to her husband’s brother who had not got a visa. Tormented by pangs of separation, Bharti crossed the border.

The group of 479 Hindus she was with attended the Kumbh and then made its way to Delhi’s Bijwasan area, where they have been living in a couple of buildings. Bharti spends the day looking at a picture of her baby taken on a relative’s cellphone. “I am writhing like a fish without water,” she says. Outside her room, volunteers of a Hindu group are distributing foodgrain. But she has no appetite, she says.

There are more than 2.5 million Hindus in Pakistan, most of them poor Dalits who live in Sindh. Life has always been hard for Hindus in that country ever since its formation. But things turned worse for them after the Babri Masjid demolition of 1992. In the past few years, thousands have been reported killed, and hundreds of women abducted, raped or forcibly married off. There are also reports of forced conversions to Islam. Things are so bad that many feel that it is impossible for them to live in Pakistan any longer.

In March last year, Indian middle-order batsman Virat Kohli scored an unbeaten 183 against Pakistan in the Asia Cup. The same night, three Hindu girls of the Kolhi tribe were abducted from a village in Sindh. “We make sure that our daughters get married by the age of 10-11. But even that does not guarantee their safety,” says Nehru Lal, one of the refugees from Hyderabad. Among those who managed to flee this time is 36-year-old Lakshman, a fruit seller from Sindh. His six-month-old granddaughter died of an unknown illness soon after they reached Delhi. But he himself is lucky to be alive. About two years ago, he was abducted by Muslim extremists who wanted him to convert. When he refused, they abducted him one night and kept him chained for three months. “They would slit my wrist every day, asking me to convert,” he says, “But I refused.” Then one night, he got a chance to escape. But his abductors chased him and stabbed him in the back. They left him on the border of Balochistan, assuming him dead.

The recent phase of persecution of minorities in Pakistan has been attributed to rising religious extremism, some of which stems from the State-sanctioned school curriculum. According to Pakistani historians, the tilt towards religious studies began in 1971 under the leadership of Zulfiqar Ali Bhutto and was encouraged by the military regime of General Zia ul-Haq. A Los Angeles Times report says that a study of the country’s public school curriculum and textbooks by 29 Pakistani academics in 2002 concluded that their ‘textbooks tell lies, create hatred, inculcate militancy and much more.’ In 2007, two Pakistani students from America’s Middlebury College conducted a review of State-approved school textbooks and found that revisionism in Social Sciences had reached dangerous levels. While passages on the festivals of Hindus and other minorities had been removed, menacing ideas like ‘Pakistan is for Muslims alone’ or ‘Muslims are urged to fight Jihad against infidels’ had been introduced. What is taught at thousands of madrassas across Pakistan is presumably even more intolerant. Such invective manifests itself in the brutalisation of its minorities.

When it comes to protecting minorities, Pakistan has a terrible record. There are hardly any convictions for crimes against them. Even arrests are rare. There are a staggering number of bonded labourers in Pakistan, a vast majority of them Hindu. According to Hanuman, another recent arrival as a refugee, he has seen about a thousand Hindus—men, women and children—held in captivity as slaves by a landlord. “More than 500 families of the Bheel tribe were forcibly converted recently in Laut Kani village,” he says.

It is not only the poor who are targeted. In 2012, Rinkle Kumari, the 19-year-old daughter of a school teacher, was abducted and forcibly wedded to her Muslim neighbour. In 2007, Garish Kumar, a young engineer whose father was a trader, was kidnapped and his mutilated body was later found near a madrassa. There are many such cases and most of them go unreported.

Kunwar, a fruit vendor who has managed to cross over to India with his two children, says that one night last year, as he was about to sit down for a meal with his family, a few men barged into his house and hit him from behind. When he regained consciousness, his wife was gone. “I went to the police,” he says, “They said ‘Tell us their names and only then can we do something’.”

In another corner of their makeshift camp, Rukmani holds a picture of her son’s body and weeps silently. Twenty- year-old Srichand was working as a labourer in an oil factory. Three years ago, he went missing. “I fell at [the policemen’s] feet to let me know what had happened to my son,” she says. Finally, a few days later, she was handed a picture of her son’s corpse. “I have no idea what happened to him. I didn’t get his body. Where they buried him, nobody told me,” says a distraught Rukmani. “My son said he will work hard and get us money. But in the process, I lost my son,” she wails.

Another fruit vendor, Lakshman Kumar lost his eyesight in an attack five years ago. An owner of two shops in Sindh, he was being harassed repeatedly to sign his shops away. But he refused. Then one day, a few extremists hit him with an iron rod on his head. “I had to sell off my house to get treated at Hyderabad’s Gul Nursing Home. It cost me Rs 5 lakh,” he says. He survived but lost his eyesight. A small tube still runs from the back of his head through his urethra, he says, to pass blood.

Kesri has fled with her five children. Her husband who cannot walk was not given a visa. “My husband asked me to run away to India and save the children and our religion,” she says.

Most of the youngsters are uneducated. “We face a lot of discrimination in schools. They don’t let us sit on benches and call us ‘kaafir’ (infidel),” says 18-year-old Roopchand. When he was young, he says, he was sent to a school by his parents. “But they would force me there to recite the Quran,” he says, “So I dropped out.”

Most Hindus work as labourers on farms of Muslim landlords. “Some of this land belonged to us but was forcibly taken away,” says Hanuman Prasad. “And then we were forced to work as labourers on our own land.” He managed to get a visa along with his few family members. But many of them are still stuck there. “We do not want anything except refuge in India. They can kill us here, but we will not go back,” he says.

This batch of refugees has been provided shelter by Nahar Singh, a superintendent with India’s Customs and Central Excise Department. It was in 2011 that Singh read a news report of a batch of 145 Hindu refugees who had taken shelter in a camp in north Delhi. “I went there and offered them some relief material, but my heart was not at peace,” he says. He returned a day later and brought them to Bijwasan. To accommodate them, he had his tenants vacate a building that was fetching him a monthly rent of Rs 70,000. Since then, he has been petitioning the Government and United Nations Refugee Agency, among other agencies, to come to the aid of these refugees. Gradually, most of this lot moved to other areas as they got work. In turn, they told the new batch about Singh’s shelter. That is how the 480 people who took the Thar Express from Karachi to reach Rajasthan, and then the Kumbh, ultimately reached Bijwasan, which is near Delhi’s Gurgaon border.

But they could not all be accommodated in one building. So Nahar Singh arranged another and provided them with food and other essentials till Hindu groups pitched in. “We have leaders like Manmohan Singh who came from Pakistan. If he can become Prime Minister, why can’t these refugees be given citizenship rights?” asks Nahar Singh.

The refugees say they do not want to go back to a place where they cannot even cremate their dead. “When the Babri Masjid was demolished, the Pakistan government created so much noise. But what does the Indian government do when Hindus are targeted in Pakistan? Nothing,” says Nehru Lal.

The Government has not done anything for the refugees so far, except extend their visas for a month. New Delhi’s apathy has left them distraught. “They have ripped apart our families by granting us visas selectively,” says Kesri. “India welcomes everyone—from Tibetan refugees to Bangladeshi immigrants. If they are welcome, what problem can a few thousand Hindu refugees pose?” asks Hanuman Prasad.

So far, no Hindu refugee from Pakistan has been deported by the Government. But in the absence of any policy guidelines on their status, their fate remains precarious at best.