The 'Slumdog' kids are leading schizoid lives. Where a billion brownies failed, Danny Boyle is winning. Why is it that some of us are still the white man’s burden? 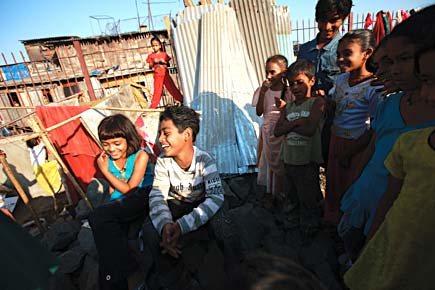 The Slumdog kids are leading schizoid lives. Why is it that Danny Boyle is winning where a billion brownies failed?


Indians are quick to congratulate themselves. Remember when nearly six months ago, Isro sent a rocket to the moon, 40 years after the US landed a man on that distant piece of earth, and we made wild exclamatory noises and patted each other’s back, and pretended this was rocket science? Well, the rocket cost us close to $100 million and a Padma Shri. The Padma Shri went to the cupboard of G Madhavan Nair, Isro chief. The $100 million is still littering up the lunar orbit. And, of course, we have learnt nothing new about the moon.

If that $100 million had been spent in clearing the crap off say, Mumbai’s slum roads and in generating employment and raising roofs, talented ten-year-olds like Mohammed Azharuddin Ismail and Rubina Ali, who acted in Danny Boyle’s Oscar-winning movie Slumdog Millionaire, wouldn’t be living a schizoid life.

If any kids needed psychological counselling, it is Rubina and Mohammed. These two children are living at least four lives. But in keeping with the Great Indian Fear of Naming Anything—my grandmother would never admit she was arthritic because if she named the illness, she would have to deal with it; best to go around deluding oneself and saving money—we have chosen to ignore their manic depressive childhoods. The problem of calling a spade by its name is that it entails a lot of digging.

The only person who seems to be genuinely interested in their lives is Boyle. He has been flying in and out of India, hugging the kids, setting up a trust, looking for an apartment for them. All he did was to make a movie, and make them act in it well. He has paid their fee and that should be that. Instead, it is as if the two kids are his responsibility. For the white man, nothing has changed. Some of us are still his burden.

Why are these kids any less the responsibility of say, Resul Pookutty? True, Pookutty, since his sound Oscar, has taken on the roles of a cultural commentator—“the government should take over culture (!)”—and a professional ribbon-cutter with appalling seriousness. But Rubina and Mohammed were his colleagues. And like him, they stay in Mumbai. For a man of sounds, he has been strangely quiet about the real slumlord issues that Rubina and Mohammed represent. Much of what goes for Pookutty applies to music Oscar winner AR Rahman as well. Perhaps even more, as Rahman is a much greater celebrity. As Spiderman said with great humility—before he went berserk soon after in part 3 of the series —great power means great responsibility.

Perhaps material support is too much to expect from them. But it still doesn’t explain why they haven’t pulled their weight with the establishment on behalf of the kids. Neither have the sentimental hunks and dolls of Bollywood, whose eyes turn moist if they so much as see a rigged-up award coming their way from afar. They may be in the right to save the best tears for themselves, but surely a Starnite for Mumbai’s slum children couldn’t be an inconceivable project?

The jubilant page 3 photographs and songs in praise of the slumlord kids have run their course. For a while back there, we tried really hard to congratulate our way out of the real issue that Slumlord Millionaire represents. Which is social responsibility. If Mohammed and Rubina are indeed questions we must answer, for the moment at least, the only man trying to do it conscientiously is Danny Boyle. That he happens to be a white says something for the colour of our hearts as well. There seems nothing for it but to blast off another rocket to the moon. Maybe this time, we could strap the two kids to the cockpit?