Those Who Still Go Unpunished

If a national monument to the gas tragedy is also to be a reminder of mistakes made, then we should consider putting up statues of a few senior Congressmen. 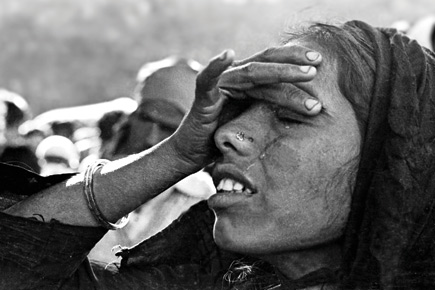 If a national monument to the gas tragedy is also to be a reminder of mistakes made, then we should consider putting up statues of a few senior Congressmen.


In the blazing summer of 2003, 27-year-old Shahid Noor, one of the 27 children orphaned by the Bhopal Gas Tragedy, was sitting on a hunger strike in a corrugated iron shed. The shed only served to magnify the heat, but the orphans had been left with little choice. Shahid was asking for one of the jobs they had all been promised nine years earlier by two-term Chief Minister of Madhya Pradesh Digvijaya Singh.

The day after Shahid commenced the fast, he received a letter from the MP government. It was dated 3 July. The subject: ‘Regarding application for self-employment of those orphaned by the Bhopal Gas Tragedy.’ It asked for details within three days, cautioning that ‘you will be responsible for [any]delay and it will be assumed that you do not want the job’. Typical of the bureaucratic callousness that has marked most government aid to the tragedy’s victims, Shahid got the letter on 7 July.

Such stories are the substance of the daily lives of the victims.  The media’s failure to report them with the attention they deserve has lulled the country into believing the tragedy was restricted to the night of 3 December 1984. The image that ends the series of photographs accompanying this article conveys, far more powerfully than words could, the endless tragedy that victims have had to suffer every day, and how it continues to visit their children and children’s children after them.

For them, the court judgment passed on 7 June was only another in a long series of disappointments. But even they would have been surprised at the hypocrisy with which the Union Law Minister and his party, politicians in general, and the media overall greeted the judgment. The judgment was inevitable. It has been for 14 years. After the Supreme Court amended the charges from ‘culpable homicide’ with a maximum sentence of 10 years to a ‘rash and negligent act’ in 1996, the two-year sentence passed was the harshest the judge could have.

It is as if for 14 years we have been heading straight for a cliff clearly visible far in the distance, and then we find ourselves expressing surprise at the fact that we actually went over. The same media that for 14 years has had no space for the daily tragedy unfolding there—the ‘Oh no, not Bhopal again’ syndrome—is turning around and castigating the abdication of responsibility by other institutions, an abdication that may have never happened if the media had done its job in the first place.

But if the media is one of the villains of the piece, it is by no means the worst. The BJP spokesperson Ravishankar Prasad found the verdict painful and said the CBI should go for an appeal. He then went after the Union Government on the Nuclear Liability Bill. For good reason; if he had lingered on the subject, he may have been asked what his own party has done for Bhopal’s victims in the seven years it has been in power in the state.

The BJP’s only contribution has been to communalise death in the tragedy. Of the 56 wards in the Bhopal Municipal Area at the time of the tragedy, 36 were found to be gas-affected, and residents here were eligible for relief. These wards were inhabited mostly by Muslims. The other 20 Bhopal wards, largely inhabited by upper-middle class Hindus, bore no impact of the tragedy, yet in election after election, the BJP has made the provision of relief for these wards one of the mainstays of its campaign in the city. In 2004, the state BJP president and former Chief Minister Kailash Joshi even moved an application in the Supreme Court which was turned down.

Yet, even the BJP is a bit player in the tragedy. After the judgment, the Congress party spokesperson Janardan Dwivedi said that the “legal system should be reformed to ensure that there is no delay in justice for victims”. But it is his party that has been sitting on the request for Warren Anderson’s extradition since the very early days of UPA-I.

Union Carbide Corp Chairman Warren Anderson was arrested by the Madhya Pradesh Police at Bhopal airport soon after he touched down from the US on 7 December 1984. The charge against him was serious: ‘culpable homicide not amounting to murder’. There was direct US pressure on the Rajiv Gandhi Government at the Centre. Anderson was released on bail, flown to Delhi on an MP government plane. He fled the country and has been an absconder since. Arjun Singh’s closeness to the Union Carbide management in Bhopal was well known, and he made frequent use of their Shyamla Hill Guest House overlooking the Bhopal Lake.

Digvijaya Singh (Chief Minister of Madhya Pradesh from 1993 to 2003, now General Secretary of the Congress)

The onus for the lack of proper healthcare, the failure to distribute relief and the failure to provide basic civic amenities to the victims, such as clean drinking water, lies almost entirely on the ten years of Digvijaya’s regime in Bhopal. The current difficulty in getting the polluter to pay for cleaning the contamination at the site can also be traced to his tenure. In 1994, Union Carbide India Ltd became Eveready Industries India Ltd. In 1998, the Madhya Pradesh State Government revoked Eveready Industries’ lease on the site, and took back possession of the facility. Under such circumstances, state governments are supposed to take back land in the same condition it was given; in other words, this should have only been done after the site was cleaned up. This failure to insist on a clean-up, deliberate or otherwise, has set back all attempts to get Dow Chemicals, which later took over Union Carbide, to assume responsibility.

Kamal Nath (MP from Chhindwara and Commerce Minister in UPA-I)

In 2007, he wrote to the PM as part of a bid to ease Dow’s entry into India: ‘While I would not like to comment on whether Dow Chemicals has a legal responsibility or not, as it is a matter for the Courts to decide, with a view to sending an appropriate signal to Dow Chemicals,  which is exploring investing substantially in India and to the American business community, I would urge that a group under the Chairmanship of the Cabinet Secretary be formed to look at this matter in a holistic manner, in a similar manner as was done with respect to the Enron Corporation with respect to Dabhol Power Corporation.’ The comparison with Enron is telling, and he was only spelling out the reason that governments, starting with the Rajiv Gandhi regime, have gone soft on Union Carbide and its successor Dow—sending ‘an appropriate signal’ to the American business community.

He visited the Union Carbide factory in 2009 and said, “I have held that waste in my hand, I am still alive and not coughing.” He also observed that the greenery around the abandoned premises was better than most other places. He asked if it would have been (so green)… “with all the toxicity around”. The minister’s IIT education was clearly inadequate in making him realise that it was not trees that were felled on the night of the gas tragedy.

Jairam Ramesh also announced that the Centre would assist the state government in constructing a Rs 116 crore memorial to the tragedy (while still being unable to assist in the supply of clean drinking water to the victims at a much lower cost). “It will be a national monument built in the memory of those who lost their lives in the tragedy,” he said, “and a reminder of the mistakes that were made so that they are not repeated.” If a reminder of mistakes is what the country needs, then we should also consider putting up statues of a few senior Congressmen at the memorial site.