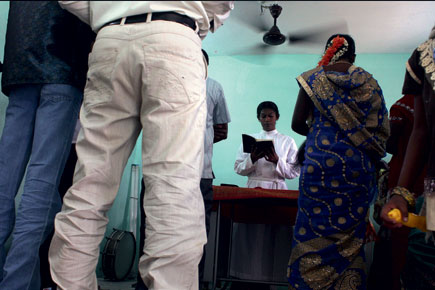 
On a bright and windy day last April, a statuesque lady sporting a graduation cap and golden sari, with matching bangles and dangly earrings, swept up the dais outside the Madras Theological Seminary and College in Chennai. As she settled behind the podium to speak, a hush descended over the crowd. Her black capelet fluttered in the breeze. “My name is Bharathi,” she began, in a steady but quivering voice, “and I am a transgender. I come from Tuticorin and my parents named me Bharath Raja.” She dabbed at her eyes. Before an audience of white-suited gentlemen, silk sari-clad ladies and restive little children, she went on to explain how the Bachelor of Divinity she was receiving that day was redemption from the taunts that pursued her ever since she hit puberty.

At that time, Bharathi recalled, as her behaviour and gestures turned distinctly feminine, her classmates began to treat her with derision and contempt. When the derision was deflected towards her siblings, they, in turn, began to “behave harshly” with her. She recalled, her voice breaking, that her mother told her, “Why have you [been] born to me?” At the time, the only person who treated Bharathi with kindness was their tenant, a young apprentice nun, with whom she began to pray. “Every evening, I used to go to St Peter Church,” Bharathi said, “and pray in the following way: ‘All my classmates are laughing at me and even my sisters are poking fun at me. God, why did you create me in this peculiar manner? Why should I live? Kindly give me a place and take me to heaven.’”

Instead, she found her way to Chennai, after a few unpleasant detours. First, one of her sisters, a staff nurse, enrolled her in a lab technician training course, where the ridicule intensified because Bharathi had begun to thread her eyebrows and do a little “touch up” with cosmetics. She quit and went to Coimbatore, where she worked for a few months as an accountant at a weighbridge. But truck drivers who frequented the place indelicately suggested she’d be open to other jobs when they occasionally showed up drunk at her door late at night.

She finally sought out the Evangelical Church of India (ECI) in Chennai, as her low board exam scores diminished her chances of securing “secular degrees”, besides which she was “so afraid of how people would behave”. Bishop Ezra Sargunam admits to sharing her misgivings when he granted her admission and let her stay in the girls’ hostel. “But then we gave her a separate room,” he says, “and she was well-accepted by her classmates, and did so well in her studies.” He adds, “We’ll hopefully be ordaining her in September or October this year.”

Two months after her graduation, Bharathi was sent to Natarajapuram, a village about 60 km away from Chennai, where she now leads a congregation of about 40 parishioners, most of who work in the surrounding factories, or cultivate small plots of groundnut and legumes. “I first thought she may not be accepted,” says Sargunam, “but villagers of all faiths worship her, and touch her feet.” He confesses to feeling a little awed himself when he first saw her in her religious habit. “I was amazed. She wears a white cassock when she conducts service. She looks normal—more of a woman.”

Bharathi lives in an airy, sunlit house in the heart of Natarajapuram’s aravani (Tamil for transgender) enclave, with her adopted mother, two adopted sisters, and a cantankerous white Spitz named Topsy. A short walk down the sandy lane from home is the temporary ‘church’ where she conducts her Sunday service—a room with a metal desk and wardrobe—which one of her most prosperous parishioners, a painting contractor, has painted a vivid cerulean blue, and keeps electrified with a branched off power line from his home next door.

This is only temporary, Bharathi says proudly, as she binds a bright white cassock around a sap-green sari edged with gold in her bedroom. A few months ago, Kalaignar TV paid her a visit, and the story they aired subsequently attracted millions of viewers.  Including, Bharathi says, “Some South Koreans who donate[d] money for building a new church.” She puts on a golden necklace and pair of anklets, picks up a small beige purse, a black-bound Bible, and strides down the path to the prayer room, where some of her parishioners await her—an elderly man who keeps the church’s accounts, and two young girls in colourful kurtas and chiffon dupattas.

Bharathi greets them warmly, and after chatting with them for a few minutes, walks up to the far end of the room, and stands behind a metal desk draped in a lace doily. She closes her eyes, draws in a deep breath, then launches into a fiery incantatory invocation, punctuated with cries of “Hallelujah!”, “Viduthalai! Viduthalai!” (deliverance), and “Stotram! Stotram! Stotram (Praise the Lord)!”

She then launches into her sermon, interspersing passages from the Bible with songs whose choruses invoke spirits and the blood of lambs. The room gradually fills up with men in silken shirts, accompanied by their shy young wives with babies in lacy caps. A little boy with a ghoulishly powdered face enters and settles down in a corner with a feeding bottle. Soon, the small room reverberates with singing and clapping. A young boy is given a plastic drum, and sets about giving it an enthusiastic, arrhythmic drubbing.

Outside, after the service, Devanbu, the painting contractor, orders a round of soft drinks and praises Bharathi for her “energetic” manner of conducting prayers. Keshavan Lawrence, who works at a nearby fruit drink factory, says he displayed Bharathi’s name prominently on his wedding invitation a few months ago, even though she didn’t conduct the ceremony herself. “Her teachings are very good,” he says, “I get new-new ideas from her, and she always picks a passage from the Bible that’s suitable to our life.” “I also conducted one baby shower,” Bharathi adds. “The baby’s name was Jennifer-Margaret.”

Other than acceptance from her parishioners and the priests, Bharathi is especially glad to have earned her parents’ respect with her new career. “I went home two months back,” she says, “my father and mother accept me. They said they were happy that I was a priest, and they talked to me very nicely.”

There are about 50,000 transgender people in Tamil Nadu, and 3,000 in Chennai alone. Although persecution by the police persists—given that many have been induced by circumstances to take up sex work—Tamil Nadu is one of the most transgender-friendly states. They’ve had their own welfare board since 2008, separate voter identification cards, ration cards, government-funded group housing projects, and even free gender reassignment surgery. They also bask in the reflected glory of several high-profile transgender women—including talk-show host Rose, who was first discovered at the annual drag queen beauty contest hosted by the NGO Sahodaran; Dr Selvi, a physiotherapist; ‘Living Smile’ Vidya, an activist and writer (named after her bestselling book); Glady, a Tamil art film director. What makes Bharathi so special, though, is that she has managed to achieve independence and a measure of fame without the socio-economic advantages of her celebrated counterparts.

Sociologist Saurabh Dube, part of whose research explores ‘vernacular’ forms of Christianity in India, observes that the ECI’s decision follows “similar moves in the Evangelical Lutheran Church in North America” and “the wider democratisation of the Christian faith”. He adds that the move is “remarkable” for its democratising potential, given how rigidly hetero-normative the vision and practice of Indian denominations has so far been.

Others are suspicious of the church’s intentions. Like Sunil Menon, stylist, activist and founder of Sahodaran, an NGO that works with male sexual health and, since 2008, with transgender people. “There’s a sense of trepidation when you say ‘religious’,” Menon says, “because they tend not to be very inclusive of sexual minorities. For example, take those religious minority groups that recently opposed the [decriminalisation of homosexual acts among consenting adults] at the Supreme Court.”

Menon says he suspects a “hidden agenda” behind acts of generosity by apparently altruistic clergymen. A few cases, he says, have been brought to his attention in the past. “A few years ago, a pastor in north Chennai invited transgenders to his church on Sunday, and gave them lunch,” says Menon. “He took pictures of them having food, which he sent to a funding agency and got a lot of money.” Another transgender friend underwent an attempted exorcism by a pastor who told her that she was possessed by a female spirit. The pastor was half-strangled for his pains, Menon gleefully recalls.

“But what upsets me more,” Menon says, “is that the selling point of religion is guilt. Most transgenders are told they’re bad, that they’ve sinned, and that praying is the only thing that will redeem them.” Indeed, Bishop Sargunam does remark that, “If such people come to Christ, their character will be changed.”

Bharathi has an incontrovertible counter-argument, though: “Just look in the Bible. Isaiah 56 says: ‘To the eunuchs who keep my Sabbaths, who choose what pleases me/and hold fast to my covenant—/to them I will give within my temple and its walls/a memorial and a name better than sons and daughters;/ I will give them an everlasting name/that will endure forever.’”