The War is On

With Azad’s killing, the Centre has lost a big opportunity for peace with Maoists. 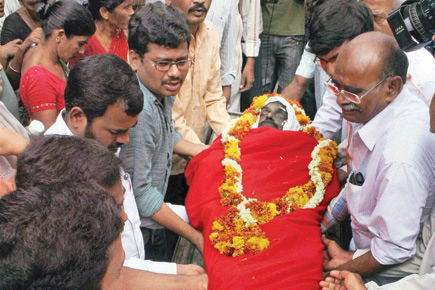 With Azad’s killing, the Centre has lost a big opportunity for peace with Maoists.


‘Dear Swami Agniveshji…’ Thus began a small step that could have ensured long-lasting peace across India’s Naxal-affected zones, virtually half the country. That letter written by top Maoist leader Azad was addressed to Swami Agnivesh, the social activist chosen by the Centre to hold talks with the CPI (Maoist). Things were moving, and there was the optimism that after an endless cycle of violence, peace could finally be achieved. But before that could happen, Azad was killed by the police in what appears to be a fake encounter. With his death, current hopes of peace have all but vanished. Senior Maoist leader Kishenji reacted immediately to Azad’s killing, calling the ruling Congress party “a big betrayer”.

Open has now learnt from top Maoist sources that much progress had been made towards holding talks with the Government. Azad, as per these sources, was carrying Swami Agnivesh’s letter to the CPI (Maoist)’s guerilla zone in Bastar to discuss it with the Dandakaranya Committee of the party. He had already discussed it with other regional committees, and was moving fast from one place to another to expedite the talks. “This is what the intelligence agencies took advantage of, and managed to zero in on Azad,” says a Maoist leader. Azad was allegedly nabbed from the Nagpur railway station, taken to the forests of Adilabad in Andhra Pradesh (in a helicopter, believe Maoists), and shot dead in cold blood along with another person. “They had been trailing him since March, when they almost got him,” says Gudsa Usendi, spokesperson of CPI (Maoist)’s Dandakaranya Special Zone Committee, where Azad was headed.

It is believed that both Maoists and the Centre had agreed on a mutual ceasefire for a period of three days, after which a formal letter was to be sent by the Home Ministry, inviting the CPI (Maoist) for talks. Maoists had laid down no conditions for the ceasefire; and Maoist sources claim that no terms were set for the talks either. But Swami Agnivesh was told that to turn the atmosphere conducive for talks, the Government could lift the ban on the CPI (Maoist) and free four top Maoist leaders lodged in various jails. These are: Kobad Ghandy, Amitabha Bagchi, Sushil Roy and Narayan Sanyal. “Lifting the ban seemed important to us because that way an overground organisation and not a banned organisation would have held talks with New Delhi,” says a Central Committee member of the CPI (Maoist).

In fact, Azad had made this clear in his letter to Swami Agnivesh, dated 31 May. ‘You are also aware of the difficulties involved for an underground party that is proscribed by the Government for talks. Hence we had proposed the release of political prisoners from the jails. At the outset, the Government can take the initiative to release at least some of our Party leaders, so as to facilitate talks with them,’ he wrote.

In the letter, Azad also writes that the ceasefire period should be much longer than 72 hours.

‘Our party is very serious about bringing about peace, especially at the present juncture when lakhs of Adivasis had fled, and are fleeing their homes; when lakhs of Adivasis are facing chronic conditions of hunger and famine due to their ouster from their lands… one should not be swayed by victories and defeats at this critical juncture in the life of the Adivasi community in our country, but try to create conditions whereby their survival is ensured,’ he opines in the same letter.

On 28 June, Swami Agnivesh responded to Azad’s letter. Though he remains tightlipped about its contents, Maoist sources who have seen that written response say that three slabs (15 July, 20 July and 25 July) were offered to the CPI (Maoist) to begin the 72-hour ceasefire.

With this letter, Maoist leaders say, Azad alighted at the Nagpur railway station on the morning of 1 July, from where he was supposed to go and meet another leader, Sahadev. Azad and his wife Sitakka would have been taken to Bastar by Sahadev. But before the two could meet, Azad was allegedly nabbed by the Andhra police. His wife is still missing. Another person who the police picked up turned out to be a journalist—Hem Chandra Pandey.

In the Maoist hierarchy, Azad whose real name was Cherukuri Rajkumar, held a very special position. A BTech in Chemical Engineering from Warangal’s Regional Engineering College (he had left his MTech course half way), he was the second president of the Radical Students Union, and in 1990, was inducted into the Central Committee (CC) of the then People’s War Group (PWG). This later merged with another Maoist group MCC to form the CPI (Maoist) in 2004. In the CPI (Maoist), he continued as a CC member, working as the party’s central spokesperson for years. He was very close to the chief of the CPI (Maoist), General Secretary Ganapathi, and tipped to be the next Maoist chief. According to reports, he had recently been appointed by the party to run its operations in south India. He was also appointed by his party to oversee talks between Maoists and the Andhra Pradesh government in 2004.

With his death, party cadres are baying for revenge. The north regional bureau of CPI (Maoist) has said its cadres would avenge the ‘cold-blooded murder of Comrade Azad’. Already, a four-day bandh has been announced by Maoists, and there are credible threats of big attacks on security forces—a measure to demonstrate their anger. “On 28 June, you send a letter and two days later you kill the messenger,” says GN Saibaba, a Delhi-based activist. “The Government knew very well that Azad was trying to build a consensus for talks within the CPI (Maoist). In his seven meetings with Home minister Chidambaram, Swami Agnivesh made it clear that Azad was the man he was communicating with. And yet, they killed Azad knowing fully well who he was and what he was up to. Isn’t it clear now that Manmohan Singh and his Home Minister don’t want talks to happen?” asks a top Maoist leader.

Ironically, in the same letter, Azad had expressed doubts about the Home Minister’s intent. ‘Do you really believe that Mr Chidambaram is earnest in proposing talks when there are reports of how the central government is equipping its forces with several more choppers and preparing the Indian Army too for the war on people?’ he asks.

Swami Agnivesh, on his part, has this to say: “His (Azad’s) death has been a big disappointment, but now it has become even more important to hold talks.” (See his exclusive interview with Open).

The sad reality is that talks are unlikely to make any headway now. The CPI (Maoist) is busy trying to consolidate its position, now that a number of senior leaders have been killed or arrested in the recent past. A number of vacancies in the party’s Politburo and Central Committee (the highest decision-making body in the party) need to be filled.

Already, news is trickling in that Azad’s place will be taken by another senior Maoist leader, Mallojula Venugopal alias Sonu, who also happens to be Kishenji’s brother. Once that is achieved, Maoist leaders say, they will be back to ambushes. And this time, it’s going to be a long, bloody war.