The Voyeur in Our Midst

…and the case for dignity in reporting on rape 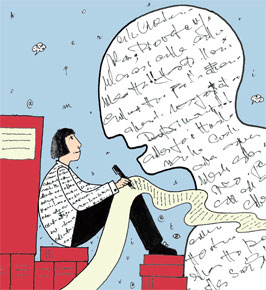 …and the case for dignity in reporting on rape

That she told me she was raped was enough. (It was Liberia and she had been raped by many men. Her ordeal was manifest in those words.) I could have asked more—the ‘how’ and ‘when’ and ‘what else’ kind of questions. It would have been of a piece with the kind of journalism we practise. And in keeping with the fact that as a reporter, one must be able to tell the whole story, including the most uncomfortable parts. It did cross my mind. But at some point, one must put the pen down. Not everything needs to be recorded. Not what exactly Tarun Tejpal, former editor and founder of Tehelka, did to the young woman journalist in the elevator. It is enough that she said “sexual assault”.

Everyone does not need to know the lurid details. But the details are everywhere. In the newspapers, on social media, in everyone’s head. The social media, where a blogger even leaked her photos, is like the street. It is an unregulated space. But traditional media is supposed to have filters. It is disturbing, then, to read on the front page of a national newspaper the salacious details of the encounter in the elevator. As a woman, I find it hard to be in a space where people go on about the assault and the manner of it. I too feel outraged.

My first encounter with a rape victim was in an old house in Utica where I first started reporting in the US. She was a Liberian refugee, and spoke to me while she worked in the kitchen, and cried in between. She didn’t want me to see her face while she spoke. She was raped many times over in the long-drawn civil war that has torn the country apart. They were brutal, she said. I had wanted to ask more. But that was the only truth she wanted me to have.

That we are voyeurs is not easy to admit.

Rape stories put us in an uncomfortable space. It is not easy to write about rape. Just as it is not easy to write about death or a funeral. In these situations, it is awkward to ask: ‘How do you feel?’ Yet we do. For the sake of colour in the story. Our questions violate boundaries. Reporting rape stories demands a measure of propriety—I repeat, we do not have to report the graphic details of what happened in that hotel elevator. The account of her violation was leak- ed by fellow journalists, possibly to counter its tagging as ‘untoward’ by the magazine’s managing editor Shoma Chau- dhary. The third sentence of the victim’s email to Chaudhary says ‘…the editor in chief of Tehelka, Tarun Tejpal, sexually assaulted me at THiNK on two occasions last week.’ That is enough detail. How we choose to tell the story matters.

The FIR might help us understand the status of the case, but it does not give us the ethical sanction to reproduce the graphic details of the case. Sameera Khan, writer and researcher, and a member of the Network of Women in Media, India (NWMI), recalls the 2009 TISS student rape case where Mumbai Mirror went on to cite the FIR that the victim was menstruating at the time of the incident. “That was horrible. The general public does not need to know all this,” she says.

We can’t control the experiences of readers, but we can certainly guide those experiences. “In this case, and other such cases when we report on sexual assault and rape, the media tries to be helpful by supporting the woman survivor, but in reality, by putting out all sorts of intimate details of the crime and her background, it ends up invading her privacy and actually not being sympathetic to the woman at all,” says Khan, who is also the co-author of Why Loiter? Women and Risk on Mumbai Streets.

“We are following the individual and not the larger issue. We hammer away at the same event for days. By day three of reporting such an incident, the narrative falls apart. Then you start going for the victim. We violate all norms of privacy. Not revealing her name is just one part of revealing identity, as per Section 228A. You tell me who her boyfriend is. You tell me who her friends and colleagues are. These are significant identifying details,” says Khan.

“The reporting is so irresponsible. One newspaper has carried telling excerpts on the front page. We don’t seem to understand that there is a difference between reporting a sexual crime and other crimes, and it has to do with the woman’s privacy. [If the victim survives the assault and the trauma of the aftermath], she does not want to be identified as the one it all happened to,” she says.

I don’t know her. I didn’t ever work for Tehelka. But I googled her the evening I came to know of the incident. I wanted to know who she was, what she looked like. Discussions of what she is like as a person, how she likes to dress, how many affairs she has had were all suddenly fair game. Does all this matter in reporting the story? (We have seen it happen in the past in the Nirbhaya case, where reporters reconstructed her identity by writing about her high heels, her noodle-strap tops, and even her coloured hair.)

To say the least, it is horrifying to read all those details. In reporting ‘what’ happened, we are constantly letting on a little more of ‘who’ it happened to. We are constantly identifying her. The identity of any rape victim needs to be protected. There is a reason why rape trials are closed to the media in India.

Trauma stories like this one involve the reader because we have an agenda—to condemn the act and ask for justice. Identity and attribution, the other details, the language and style, and the structure of the narrative, also exposes our values. It is not objective journalism. It is not about presenting facts that we are able to access. Here, we want the reader to witness, and to agree with the writer that this should not have happened. We are publicly exposing the personal suffering of survivors, and we must do it with dignity.

It makes me cringe each time I read about her. It is like a slide show that plays in my mind. I don’t want to see her in that state even in my mind. I am a woman too. Would I want others to know how I suffered body invasion? Isn’t it enough to know that I did?

Journalism is a tough profession. We are witnesses to trauma stories. We push boundaries in trying to get to a story. But we can’t hold social media as our standard.

Trauma reporting is not about getting the scoop.

Moonis Ijlal, a journalist who produces The Social Network show on NDTV says, “Social media has no filters, no editorial policy. It is like a street. There is a lot of noise. But when traditional media starts to compete with it, it goes all wrong. It can also affect the trial, and attitudes.” What we hold back is also a story. As writers and editors, we are presented with many choices. It is in these choices that the dignity of news reporting lies.

A rape is not just another story. We can go back and forth on whether reporting it contributes to the outcry against the crime. But while writing about it, we must remember one thing—we let the reader into the victim’s life, her suffering, her trauma. If we owe the reader/ viewer details of the story, we also owe the victim the first right to refuse her consent to divulge it.

Not so long ago, I met a rape victim who married her perpetrator. It had taken me weeks to find this person. We had gone through court judgments, scanned police files. I met her in court. Before that, I had gone ahead and met her mother. Her family was upset. I told the girl about this. She looked me in the face and said it wasn’t right. I should have asked her. I kept calling her to check if she would speak to me. It was a great story. It was what my editors wanted. She was pregnant.

I had the lurid details of what had happened to her. But I wanted to ask her to let me in, and through me, the readers. It was her story after all. She said ‘no’. She said she was tired of answering the media, and she didn’t want to go through it all again. She didn’t trust me.

In the ‘why’ lies our answer. Let’s restore dignity to news reporting. Let’s not be voyeurs.