Foreigners who shell out good money to do social work in India often go back feeling cheated, misled and sometimes just ignored. 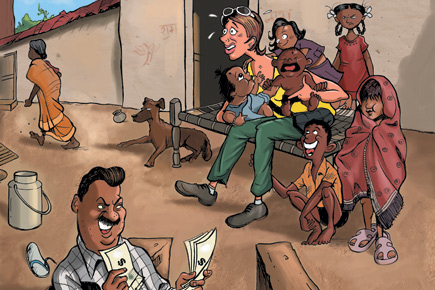 Foreigners who shell out good money to do social work in India often go back feeling cheated, misled and sometimes just ignored.


Foreigners who shell out good money to do social work in India often go back feeling cheated, misled and sometimes just ignored.

In a poor country, the concept that people would actually pay to do social service is hard to understand. Or that there exists an industry of middlemen who broker this desire. Into the first category fell Bia M, a 21-year-old Brazilian student living in the United States, who during her summer break wanted to volunteer in India. Into the second category slid the coordinator she paid $500 and who fixed her up with an NGO in India. She was to be in Delhi for four weeks working on women’s empowerment, a subject she was interested in.

Bia did eight days before taking a hurried flight back to Boston. Not everything—actually nothing—had gone as she expected. Instead of women’s issues, she was working with street children. Instead of Delhi, she found herself in rural Faridabad in Haryana. “With a roomful of street children, no lesson plan or direction, I felt like I had paid just to be a babysitter. I was tired of feeling cheated and just wanted to leave,” she says. In total, including air fare, she spent $2000. Along with Bia, four other volunteers who arrived the same week, departed.

This is not an uncommon story in India. Meaningful travel has become a popular fad in the West and many wish to give time to a good cause while touring the world. Their first stop of call is a volunteer placement company which leads them to local NGOs. The clouded experiences begin almost immediately.

Often the volunteer does not get what she expected. Tammy McLeod, 22, from Canberra, Australia, had to fulfill her university requirements of volunteering four weeks with 140 hours. She got in touch with a placement company and specifically said that she wants to do five hours daily at a childcare centre. That, she was told, would be fine. Having got that assurance, she coughed up $600. “When I got to Palampur, I was told by the teacher that the school only runs for three hours daily,” she says. That didn’t suit Tammy. The local coordinator told her there was an orphanage in Faridabad where she could do her daily five hours. “I arrived at the orphanage to be told by the kids that they were on holiday for 12 days! I then contacted the coordinator, who said he had forgotten to tell me this,” she complains.

There is no account of where the money paid is going or whether it is actually put to good use. One Lonely Planet online forum has volunteers reporting that the organisations they were placed with received a negligible amount from the

$250-1000 paid to the parent company. Alessandra Kertzer, who volunteered with Volunteering India in 2009, says, “You will never know or understand what you have paid for.” In Bia’s case too, there is no information on what happened to her money. Her local coordinator, Ananta Kumar, when asked to comment, was vague: “Many of these costs also go towards the maintenance of other struggling volunteer projects.”

Foreign volunteers are also misled about staying conditions.  Shannon O’ Donnell, a 26-year-old from Florida, had signed up for a volunteering project in a monastery in Nepal. When she reached the place, she found they had not been informed of her arrival. Though upset, Shannon and her friend Helen made the most of the situation by teaching the children Spanish and Latin salsa. But not all volunteers are able to turn the situation around. Heather Newgen, a 33-year-old Californian, found her programme unsafe. “I worked with street kids in the slums of Delhi and we had to go alone to our placements. Some people have good experiences, and that’s great, but a lot of us didn’t,” she says. “A few girls in my group changed their flights and went home earlier because it was so bad.”

All these problems can be traced to the middleman and coordinator. Pre-departure interaction with the parent company back home tends to be more professional. “There needs to be a way to cut out the middleman if it is to be beneficial for both volunteers and companies,” says Shannon. Lauren Smith, from Melbourne, Australia, actually did cut the middleman out, and it worked. She arrived in Dharamshala as an English teacher under a volunteering scheme for six months. She met local Tibetans and became involved in launching an organisation to teach Tibetans English, and their supporters Tibetan culture. They do not recruit volunteers through placement agencies, but instead work only with those who approach them directly. “It is definitely more meaningful being directly involved in a cause than relying on a  placement programme. There is more accountability,” says Lauren.

New Zealander Daniel Radcliffe, who set up International Volunteering Headquarters (IVHQ), a placement company, says that if someone is unhappy they find out why and try to rectify it. IVHQ claims to have terminated a contract with Volunteering Solutions, a local Indian company, in 2009, because it was not looking after volunteers well. “Their performance slid over a period of 12 months,” Daniel says. In practice, feedback is largely ineffective. Says Tammy, “I spoke and gave feedback to the local coordinators several times—in person, on the phone and via email—and I was still unhappy with the responses. When I filled out the IVHQ satisfaction survey to report my negative experience, I was simply told that the local coordinators did all that they could to place me in appropriate projects.”

NGOs get away with it in India because the entire sector is non-transparent. CSO Partners, a Chennai-based organisation trying to promote accountability in civil service organisations, estimates there is one NGO for every 400 people in India, and Rs 40,000 – 80,000 crore in funding annually. But there is no official database. “To date, there is no overall evaluation of NGOs as an industry relating to issues such as employment and hiring,” says Deepa Ruparel of CSO Partners.