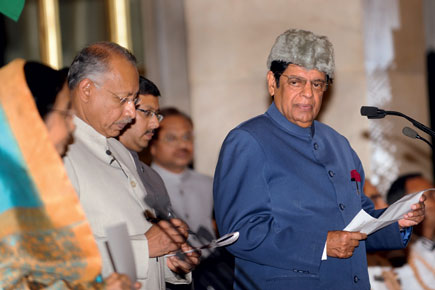 
THIRUVANANTHAPURAM ~ A Google search will tell you that the Indian Union Muslim League (IUML) is a registered political party established in 1948. It is an ally of the UPA at the Centre and of the Congress-led UDF government in Kerala. Its national president, E Ahmed, is the Union minister of state for external affairs and human resources. The party has 20 members in the Kerala Assembly, including four ministers, a sizeable presence.

For a state-level party, that sounds like an impressive profile. But it is a false profile. The truth is that it does not have a single MLA in the Kerala Assembly. This is because they were not elected as IUML candidates. The party has no Member of Parliament either; Ahmed did not win his seat as an IUML contestant.

All these politicians, while members of the IUML, were officially elected as candidates of a party that has a separate identity as registered with the Election Commission—namely, the Muslim League Kerala State Committee (MLKSC). This is why the official Parliament website—correctly—identifies Ahmed’s party as the MLKSC, even though he is widely seen as an IUML parliamentarian.

Is this legal? The Election Commission (EC)—in a notice served to Ahmed—has categorically stated that Ahmed stands in violation of the People’s Representation Act of 1951, which stipulates that no member of any political party can be a member of any other party registered with the EC. While rejecting Ahmed’s explanation that the issue is only ‘technical’ in nature since the two parties are the same, the EC has admitted Ahmed’s request for another three months to submit a more elaborate explanation.

“This is only a technical issue, the MLKSC is the state unit of the parent party, IUML,” says ET Mohamed Basheer, state secretary of the IUML, “We’ve had a strong base in Kerala since the beginning, so we registered [our party] separately in this state.” What he does not explain is why this was done.

The League leadership does not want to disclose the actual reason for setting up a separate party. Indeed, the reason was neither political nor ideological, but an ugly manifestation of the factionalism that has wracked the party since the early 1980s. The League’s then national president, Ibrahim Sulaiman Sait, was at loggerheads with its Kerala leaders, who feared he might split the party and grab its ‘ladder’ election symbol for his breakaway group. To pre-empt such a move by Sait, the Kerala faction came up with the ploy of setting up a new party, the MLKSC. Registered with the EC in 1989, it managed to get the ‘ladder’ symbol for itself. Since then, this has marked the League’s presence in Kerala.

It was a quiet metamorphosis, with few other than the League’s top leaders even aware of it. Voters were led to see the ladder as representing the League. According to EC records, the IUML exists as a registered but unrecognised party with no symbol. The MLKSC, in contrast, is both registered and recognised, and has the ladder as its ballot symbol. According to political observers, this works fine for the League, since those voters who favour it simply go to their polling booths and vote for ‘ladder’ candidates.

“[Party leaders in Kerala] have been cheating the public and ordinary party workers for long,” alleges Davood Miakhan, president of the IUML’s Tamil Nadu unit. He has been fighting a legal battle against this dual party setup for over a decade now. It is not only Ahmed who is in trouble for it. The EC has served a similar notice to Professor Khader Moideen, an MP of the IUML from Tamil Nadu, who, despite having contested on a DMK ticket, holds the post of IUML national general secretary. The League leadership is struggling to explain how a DMK member can be its general secretary.

The fallout on Kerala politics would be interesting. “The UDF government may have a terrible time,” says an EC officer on condition of anonymity. “All 20 MLAs of the MLKSC are speaking in the Assembly on behalf of the IUML, another registered party. This amounts to ‘voluntarily giving up membership of the party’ from which they have been elected—which comes under the purview of the anti-defection law.”

Being the second largest party in Kerala’s UDF alliance, the IUML is the Congress’ most important ally in the state. To tide over the crisis, the League hopes to merge the two parties. This will not be easy, though, say observers, given the League’s internal dissensions.

At the end, perhaps the most incredible part of the story is how the League’s leaders have managed to keep this dual-party drama from bursting into the national spotlight for 22 long years.