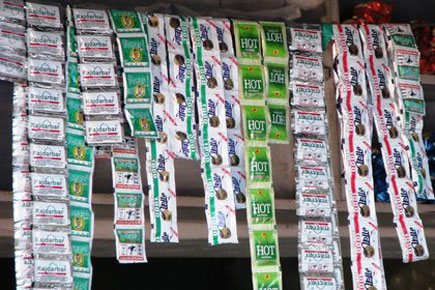 
MUMBAI ~ Maharashtra Home minister RR Patil used to be a tobacco chewer. He got his daily fix from the trusted office peon who guarded his office at the Mantralaya. Indeed, Patil found it difficult to function without tobacco in his mouth. The addiction had taken him over completely, until the day his bete noire and incumbent Deputy Chief Minister Ajit Pawar ridiculed Patil at a public meeting. Stung by the criticism, Patil took to chewing elaichi  (cardamom) instead.

There is a steadfast loyalty that politicians in Maharashtra demonstrate towards tobacco. The Mantralaya is full of them. Many peons complain that cleaning the dustbins of ministers is an icky job because many use it as a spittoon after chewing tobacco.

Now, all of this is likely to change. Chief Minister Prithviraj Chavan has launched a war against tobacco and its allied products. Having signed a pledge to fight tobacco consumption along with the Tata Memorial Hospital, Chavan will first target tobacco and gutka users in the state Legislature.

When the Vidhan Bhavan opens its doors on 25 July for the monsoon session of the state legislature, elected representatives will be in for a surprise. The campaign Chavan has planned involves extended, exhaustive sessions for elected representatives. Doctors and cancer specialists will walk the corridors of power and rub shoulders with members of the Legislative Assembly (MLA), members of the Legislative Council (MLCs), and ministers, and introduce them to the consequences of consuming tobacco. Slides and power point presentations will be used to underline the link between tobacco use and cancer. These sessions are expected to be extremely graphic in nature.

The Chief Minister is adamant that every elected representative must attend these sessions. Speaking to the media, Chavan said that if leaders were made aware of the health hazards of tobacco, they would pass this information on to the common man. “The West has succeeded in curbing even passive smoking. It is time we took the health hazards of tobacco use seriously,” said Chavan.

Along with group sessions, there will also be individual counselling. Even non tobacco users have been requested to attend, as they too need to be kept informed of the consequences.

Chavan’s request has provoked ridicule from elected representatives. Some of them stated that they were indeed aware of the hazards but took to the habit as a pastime. “There are better things for the CM to do. Such frivolous things should be the last on his priority list,” says an elected representative from central Maharashtra.