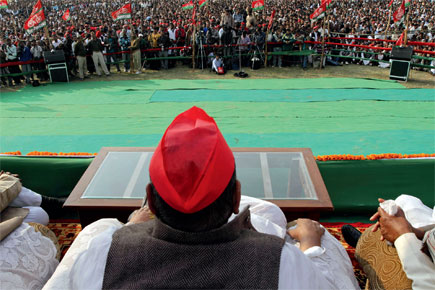 
The results are out. So are their interpretations. One of these is that the Assembly election outcome in Uttar Pradesh has given a fresh lease of life not just to the Samajwadi Party (SP), but also to the possibility of a non-Congress, non-Bharatiya Janata Party (BJP) secular front at the Centre.

Indeed, unlike Bahujan Samaj Party chief Mayawati, SP supremo Mulayam Singh Yadav has always been amenable to the idea of a third front. The SP’s landslide win, it is being argued, will therefore accelerate the nascent process of various non-Congress, non-BJP secular parties—the JD-U in Bihar, Trinamool Congress in West Bengal, BJD in Odisha and TDP in Andhra Pradesh—coming closer to form a new force in Indian politics.

Of late, these regional parties have been exercising considerable clout at the national level. Invoking the principle of federalism, they have stalled the UPA Government’s National Counter Terrorism Centre (NCTC), rejected the Lokayukta provisions of the Lokpal Bill, opposed foreign direct investment in India’s multi-brand retail sector, and even blocked legislation on land acquisition. If the SP were to join them as a fifth partner, this group might want to aim bigger.

By Lok Sabha strength, that may appear to be a formidable political combination. But the idea of a third front—or fourth front as former Member of Parliament Arun Nehru would like to call it—may not be all that easy to translate into reality. In fact, the odds are quite dismal.

First, despite the SP’s spectacular win in UP, it is not clear whether Mulayam Singh Yadav will summon the nerve to draw himself away from the Congress to any significant extent. The incoming SP government in UP may not need support in the Assembly from any other party (it has more than a comfortable majority on its own), but it remains vulnerable in less obvious ways. The SP, for example, seems astutely aware of the handle held by the grand old party in the form of the Central Bureau of Investigation (CBI). This central agency has allegedly been used by the Centre as a political tool many times in the past, and Mulayam Singh Yadav’s behaviour in Parliament, it is said, has often been dictated by CBI pressure more than the merit of an issue.

Also, this would be the first time that a third front is being contemplated without the Left parties. This makes the chances of cobbling together a front of regional parties slimmer still. While a group of parties tied to various regions, castes and ideologies may work well to fill the oppositional space within and outside Parliament, making a serious bid for power at the Centre would demand a degree of cohesion that only exists in the realm of fantasy at the moment.

Critically, none of these regional players so far has shown that it has what it takes to anchor such a united front. It is no coincidence that the Left, with its national vision and universalist approach to politics, was the prime mover and unifying factor of all such anti-Congress, anti-BJP experiments in the past.

In theory, the political potential—if not viability—of a third force lies in the steady decline of India’s two national parties: the Congress and BJP. And indeed, they have both emerged from the UP polls as weakened forces. Together, they command less than a fifth of the state’s 403-seat Vidhan Sabha strength, while the two regional parties, the SP and BSP, continue to dominate politics in Lucknow. Though such a pathetic performance in UP by national parties is not a new phenomenon, it must surely leave the Congress and BJP worried about their inability to find any significant space in a state that is so crucial for them to turn Indian politics bipolar (as they hope to do in their own interest). No matter what the parties’ leaders say, the Congress and BJP are at their wits end as they watch their influence decline in one large state after another. The gainers have been regional parties. This is so in states like Tamil Nadu, West Bengal, Odisha, Bihar, Punjab and Maharashtra. Though the Congress still happens to rule Andhra Pradesh, the mess that the party has created for itself in this state after YSR Rajasekhara Reddy’s death does not bode well for it at all.

With so many big states opting for regional parties, it seems natural to picture an assortment of future coalitions composed of them. Yet, the factors underlying the fragmentation of Indian politics, the very trends that weaken the two national parties and allow anyone to discuss yet another third front, are also factors that threaten the cohesion of any such formation. Even if it were to come into existence and win enough seats in the next Lok Sabha to attract the support of others in forming a government, it would almost certainly be fatally weakened by internecine bickering, policy dissension and leadership clashes. In other words, even if they have the numbers, the mere coming together of regional parties may not be enough to offer the country the sort of leadership it would need.

In any case, such a force would have to distinguish itself markedly from the Congress and BJP in terms of policy preferences. Unless regional parties forge a consensus on an alternative set of policies that makes broad sense, they are unlikely to be in a position to govern the country. It is possible that such a consensus can be arrived at, but that would require intense preparation and serious confabulations among them. They would certainly need to create a credible platform for policies that have been agreed upon. Such an exercise, in fact, must precede the formation of a third front if it is to be viable.

Let’s not forget that similarly conceived third fronts at the Centre proved to be no more than stop-gap arrangements. None of them lasted a full term in power.