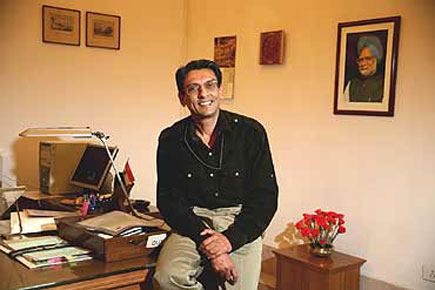 
The Congress has launched a revamp exercise. It hopes that this revamp will facilitate a few things: one, that the party and its United Progressive Alliance (UPA) government will be able to present a better face to the electorate in the second half of its term than it has in the first. Two, that it will prepare the ground for a possible transition from the old order to the new one (read Rahul Gandhi replacing Manmohan Singh, if the former agrees, and, of course, the electorate so wills). And third, that there will be better coordination between the party High Command and the Prime Minister’s Office (PMO). Little wonder then that the revamp is being carried out not in the party organisation but at the top of the Government—in the bureaucracy of the PMO.

Several officers in the PMO are being replaced as they head out on the completion of their seven-year stints there. MN Prasad, secretary to the Prime Minister, will take up a World Bank assignment, while Additional Secretary R Gopalkrishnan, too, is being posted out. Joint Secretary Sanjay Mitra will join West Bengal Chief Minister Mamata Banerjee’s office as her principal secretary. Vini Mahajan, Pankaj Saran, DPS Sandhu, Sudhakar Dalela, Ashish Gupta and Amit Aggarwal—all officers drawn from various all-India services—are set to be replaced by year-end. Some of these officers have not completed their mandated seven-year tenures with the PMO, while some others are on extension.

But, at the nucleus of this change is the replacement of TKA Nair as principal secretary to the Prime Minister by a younger (and relatively junior) officer. Nair is a 1963-batch Punjab Cadre officer of Kerala origin who has occupied this position since 2004, when Manohan Singh first became prime minister. Pulok Chatterjee, a 1974-batch UP Cadre officer of Bengali origin, will replace Nair on 3 October. It is not age here that is important, nor the cadres. But, what is at work is the proximity principle. Nair is a Manmohan Singh loyalist, and Chatterjee a Sonia Gandhi confidant. The latter had an earlier stint in the PMO when the UPA Government came to power in 2004. He was an officer on special duty to Sonia Gandhi when she was the Leader of the Opposition during the NDA regime, and has worked closely with the Gandhi family for the past several years, including serving with the Rajiv Gandhi Foundation. He was handpicked by Sanjay Gandhi more than three decades ago to be the deputy commissioner of Sultanpur in UP. Gandhi had wanted a non-UPite as the DC there when Chatterjee was spotted by VP Singh, who was then the UP Chief Minister. Despite Sanjay’s death shortly after, Chatterjee’s association with the family continued. His appointment to the position is expected to bridge the distance between 10 Janpath and the PMO, which is evidently growing, given the divergence of views on crucial policy matters between the PM’s men and the National Advisory Council (NAC) that Sonia Gandhi heads.

Also, as principal secretary to the PM, Nair has been at the centre of controversies relating to the appointment of former Kerala chief secretary PJ Thomas as India’s Chief Vigilance Commissioner— later set aside by the Supreme Court—and the awarding of a Padma Shri to hotelier Sant Singh Chatwal. His replacement, however, only partially addresses the problem because he has been named adviser to the Prime Minister with the rank of minister of state in the PMO. Chatterjee and Nair are both hierarchy-conscious bureaucrats, and the PM’s style of functioning is no less bureaucratic.

The image that Manmohan Singh enjoyed at the fag end of the UPA’s first term when he confronted the Left over the Indo-US nuclear deal has taken a severe beating. From the Commonwealth Games mess to the 2G Spectrum scam, to the appointment of a tainted officer as the CVC, the PMO has appeared no more than an arm’s length away. The PM himself has effected no changes in his office to arrest the decline in his image: his media adviser Harish Khare continues in office, despite the diplomatic embarrassment he caused by releasing the PM’s off-the-record remarks on Bangladesh to the press. Unless the PM is ready to let go of his trusted adviser, the confusion in his office is only likely to get compounded.