From anti-nuclear protestors to the Karmapa, the Government takes advantage of its labyrinthine procedures to coerce people 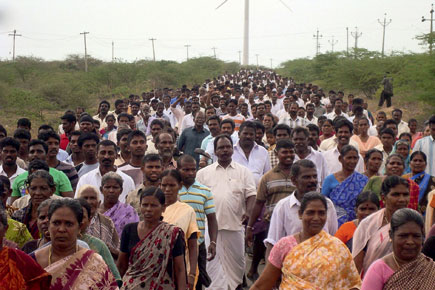 From anti-nuclear protestors to the Karmapa, the Government takes advantage of its labyrinthine procedures to coerce people


The Karmapa fled China occupied Tibet, and came to reside in India in a monastery near Dharamshala. His followers, a vast legion, started visiting the monastery and offering donations. They had settled in various parts of the world and the donations came in rupees, dollars, pounds and the Chinese yuan. The trust that ran the monastery asked the Indian Government for permission to process this currency. The Government did not process the application. The money, which could not be banked, kept mounting in the monastery till a police raid took place because of a property transaction. A case was made out under the Foreign Contribution (Regulation) Act, local newspapers took note of the yuans and labelled the Karmapa a Chinese spy! The Government has since cleared the air but the case stands as a means of coercing the Karmapa if the Government feels he is not toeing its line.

The Kundankulam nuclear power plant stir has been underway for several months. It has become an embarrassment for a government that boasts of the signing of the Nuclear Deal as its greatest achievement.  In the 24 February issue of Science, Prime Minister Manmohan Singh was quoted as saying, “You know, for example, what’s happening in Kudankulam [in southern India, where local NGO-led protests have stalled the commissioning of two 1000-megawatt nuclear reactors]. The atomic energy program has got into difficulties because these NGOs, mostly I think based in the United States, don’t appreciate the need for our country to increase energy supply.”

Days afterwards, we found that the Government had acted against some of the NGOs involved in the stir. One of them was the Tuticorin Diocesan Association, a 70-year-old NGO that had indeed obtained funding from abroad but the largest contribution came from within France, totalling Rs 10.3 crore. Again without going into the merits of the NGO’s association with the stir, France with its strong record of supporting nuclear power is hardly the country from where funds for such stirs should originate.

In neither case can it be argued that the reasons for government action were non-existent. But it does seem strange that the action so closely coincides with the advantage the Government gains from such acts. The Karmapa has since been following a consistently hard line on China, and the issue of foreign contributions has raised doubts about the anti-nuclear movement, and the raid on Ponty Chadha, fruitful or not, has sent a signal to Mayawati just before the polls.

What this illustrates is a larger phenomenon that is true across the country for most citizens, as even the constituents of Team Anna (though their posturing may have deprived them of much sympathy) have found out. In ways big and small, we are forced to evade the letter of the law in this country. There are very few people who can claim a completely clean record due to the very inefficiencies of the law and the intricacies of Indian bureaucracy. It means that the Government does not need to be totalitarian in order to be coercive, its own inefficiency becomes a tool against its citizenry, or others who deal with its laws.

To cite another case, covering India is a perilous process for many foreign journalists. But for the few journalists accredited with newspapers such as The New York Times or The Guardian, most others are under constant scrutiny by the Ministry for External Affairs. Journalists reporting for papers across Europe could well be summoned to the ministry and asked about articles they have published in a language unknown to most Indian citizens. Usually the implications are clear: if a journalist persists with articles that do not meet with the MEA’s approval, the next time he or she applies for an Indian visa, a refusal or an extended delay could well be the result. Again this is a system that may not be totalitarian but is coercive in its own way. The law regarding how visas are granted gets interpreted in a way a ministry finds convenient. A foreign correspondent could easily fall afoul of some criterion that most are not even aware of.

If this is the case with a journalist, consider how much easier it is to extradite a foreign national. In case of the nuclear protests, a German citizen Sonnteg Reiner Hermann was deported and we were told by Minister of State in the Prime Minister’s Office V Narayanasamy that he got “unconfirmed reports that Hermann, who is a German national, and was staying in a small hotel near the Kudankulam nuclear power plant, has been going around for the last 15 days.

On suspicion, the Tamil Nadu government followed him and ultimately they found that he has been roaming around in that area. The Q branch of Tamil Nadu, they are investigating, and allegedly he has been supporting the anti-Kundankulam nuclear power plant people. This came to light.”

Is supporting an anti-nuclear protest a crime? Are the PMO and PM actually suggesting the Kundankulam protests are funded and orchestrated by foreigners?

In the same interview to Science, the Prime Minister went on to claim that “the thinking segment of our population certainly is supportive of nuclear energy”. He was actually suggesting that those who raise questions about nuclear energy, after what happened in Fukushima, are unthinking. Given the poor safety record of Indian nuclear plants and lack of transparency within the Indian nuclear programme, this is what any sane person should be doing.

It does seem as if the PM and PMO have stooped to the level of carrying out what seems like a vendetta against those opposing nuclear power. The great achievement of this Prime Minister’s first term in power was the much-touted Nuclear Deal. Even for those of us who had supported it at the time, the deal seems like much ado about nothing. And if nuclear energy itself begins to be called into question in this country, then the PM really has nothing to show for it.

It is unseemly to attribute motives to a PM, especially one who had started off his second term with considerable popular support, but it is troubling when the PMO, in the wake of the PM’s interview, begins to approve of the kind of actions that are more suited to petty industrialists trying to break a union strike.

All this does tie back to the question of Indian laws. It is true that all lawbreakers use the selective application of laws in their favour, but in India’s case the coincidences are far too striking, the problems far too stark. Perhaps, it is time for the courts to begin questioning the timing of an action by any government department. If Ponty Chadha was under scrutiny, did the Income Tax Department have to wait till polls were due, and if it had waited so long, could it not have waited a month more? If over the course of several years NGOs now part of the Kundankulam stir had been illegally receiving foreign support, what had the Government been doing?