In Kashmir, a name can be much more than a name. 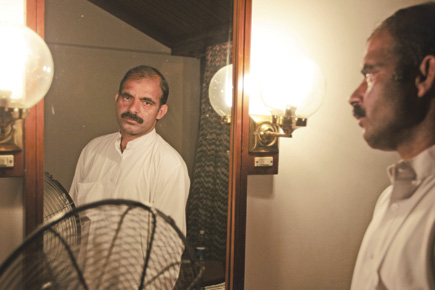 In Kashmir, a name can be much more than a name. The surreal travails of another Yasin Malik.


Yasin has never read Shakespeare. On being told of the bard’s thoughts about the irrelevance of a name, Malik lets out a sigh. “Had he spent a week in Kashmir, this poet you mention would have burnt all his works,” he says, confidently.

Malik is visiting Srinagar from his village, Zandferan, some 70 km north. Accompanied by his wife, he intends to visit the Hazratbal shrine. “You know where Yasin Malik lives?” he asks, and then mumbles a reply himself, “Just walking distance from here.”

“My wife still thinks that prayers could conjure up a miracle and we might have a son,” Malik speaks feebly and shifts uneasily on the chair. A torn file rests in his lap. This file contains the details of his case. Malik’s story is both bizarre and tragic. It is a telling example of what went wrong in Kashmir. It is the story of how a young engineering diploma holder, all who wanted was a government job, ended up spending three months in an Amritsar jail, one of them in the jail’s stinking toilet. And this because he shares his name with a former militant, now a prominent separatist leader of Kashmir and recently discovered art buff.

These three months have sealed Malik’s fate. As it often seems with Kashmir, Malik’s life also looks hopeless. But 14 years ago it held a lot of promise even though Kashmir was passing through a bad phase.

In 1994, militancy was at its peak in Kashmir. Curfew and crackdowns were a daily routine. People left their homes not sure whether they would return in “one piece”, as Malik puts it. In the summer of that year, Malik had explored many career options and eventually settled for admission to a local polytechnic. The travel from his village was fraught with risks. So it was that Malik fatefully decided to spend a night at his friend’s house in Batmaloo, on the outskirts of Srinagar. The next morning, he had arisen early for his prayers and was ruffling through his documents when a group of armymen stormed into the house. Accompanying them was a man who the Kashmiris dreaded more than death itself. The military knows him as ‘the Cat’, which is shorthand for an informer supposed to have information of the whereabouts of militants. The Cat murmured a few words, and the soliders pounced on Malik. “I asked the man why he had pointed me out,” he recounts, “and he replied in Kashmiri that he had to pick someone.”

“What is your name?” Malik remembers his first interrogator asking him. Three seconds after he had uttered the four syllables, the brutalisation began. “My head was put repeatedly in a bucket of water and I was tortured badly,” says Malik. Badly enough to damage his vital organs for life, something he discovered to his horror only after he was released. He was crestfallen. “I cried for days together,” he remembers.

Malik decided to move on. Three years later, he completed his diploma and looked forward to settling down with a job and, hopefully, a bride. But first, the job. He applied for various positions. Months became years, and there was no sign of employment. As a last resort, Malik’s uncle in Pakistan had given his family an open invitation to join him. He decided to go, and after much effort, he was in luck. He was issued a passport.

In 1999, a day before India’s Republic Day, Malik stood at the gates of the Indo-Pak Wagah border, clutching his passport, bearing number A-1542660, in one hand, and two bags full of clothes and gifts like shawls, almonds and Kashmiri Wazwan food in the other. He longed to meet his cousins. The Indian immigration officer stamped his passport, and Malik proceeded to the Customs counter. The man there was in civilian clothes, but his voice was stern. He demanded his passport. “Are you Yasin Malik?” asked the man who Malik suspects to have been an intelligence sleuth. Anyhow, “I am arresting you,” he said, and that was that. Before he could argue further, the ‘Customs officer’ tore out pages of his passport, and had him handcuffed.

Presented before a magistrate, Malik was charged with travelling on a fake passport. “I kept on crying that if I was indeed, then how did the immigration clear it?” But in the maze of courts, where lawyers and touts are indistinguishable, no one bothered listening to him. Since he was carrying little money, he could not get bail. He was put in a jail toilet since there was no space inside the barracks. “To divert attention from the stench, I kept on thinking about the meat delicacies I was carrying,” Malik remembers.

The next day, a man came to meet him who identified himself as DP Sharma. “He said he was my government counsel,” recalls Malik, “And then he said: ‘Mercy be upon God, they send people like you who make us earn some money.’”

Sharma rang Malik’s father back home and asked him to come to Amritsar with Rs 40,000. “It took my father two months just to arrange that money,” says Malik. On reaching Amritsar, the ageing man realised that only Rs 10,000 was needed to bail his son out. When Malik was released, he found that his advocate had stolen all his gifts, and was demanding the rest of the money as well.

After returning home, Malik filed an appeal with the state human rights commission. After one and a half years, the commission noted that the case did not come under its jurisdiction. Malik then filed an appeal with the National Human Rights Commission (NHRC). He found his case had been transferred to Tamil Nadu. “Tamil Nadu?” Malik asked the officer at the NHRC. “That is the address you had given,” he replied. He checked. It was his village address, and it was in Kashmir, not Tamil Nadu. It has been almost a decade since. The case is still pending. Malik has attended court hearings more than a dozen times.

While fighting his case, Malik kept applying for jobs. But he didn’t get one. It’s never easy for someone with a case registered against him to find one. He had great difficulty even getting married. With his case record, why would any parents offer him their daughter’s hand?

Three years ago, however, he had another stroke of luck, and Malik finally found himself married. Making a living is proving far more difficult. “By now, I have become over-age for any government job,” says Malik, who is now 40 and has very little to get by with. Local politicians and men of affluence had promised him help in having his name cleared of wrongdoing. “One politician even took Rs 4,000 from me,” he says.

All this, for living a law-abiding life. “Just imagine,” says Malik, “I suffered so much for trying to travel to Pakistan. If I had joined the other boys, it was just a walking distance from my village.”

The name still sits heavily on his identity. Has he ever met his namesake? “Yes, once,” he replies, “but even he couldn’t offer me any help.” A few months ago, Malik finally filed an application to officially change his name. “Please call me Yasin Hasan now,” he says, with an air of relief. He isn’t sure if he should be jubilant.