THE MYTH OF THE INDIAN AVIATOR

Did an Indian create a flying machine eight years before the Wright brothers created theirs, as a new Hindi film claims? 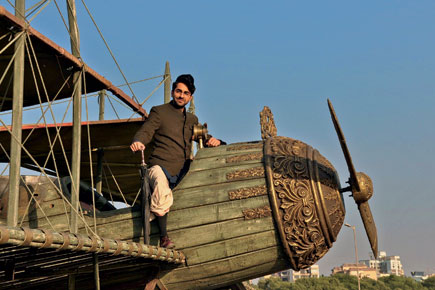 In the distant Mumbai suburb of Andheri, on a busy lane across a large cigarette factory, stationed adjacent to a statue of Jesus Christ and what appears to be a rarely-used post box, is a memorial with an unusual message. It informs the reader in Marathi that an Indian scientist, using the ideas enshrined in Vedic texts, was the first person to fly an aircraft. And dangling above this scientist’s name is an odd-shaped oval structure, somewhat like a cross between an unusual aquatic species and a badly- illustrated spaceship. This, the memorial informs, is ‘marutsakha’, or, in Sanskrit, ‘friend of the air’— the world’s first aeroplane.

A few blocks away, a 94-year-old man with high- power glasses asks with uncharacteristic zest, “Did you see it? Did you see the memorial?” He is Pratap Velkar, an architect who was involved in the construction of the buildings of the area. He says, “I put the memorial on the street so that people could learn the truth.”

In a few days, this message of an Indian trying to build an aircraft in 1895, eight years before the Wright Brothers flew their aircraft, without state patronage or financial help from any businessman, will travel from an old memorial with an odd message to a much wider audience. A Bollywood film on the subject, Hawaizaada, releases this week. On its way to the larger screen, a few more outlandish ideas are to be incorporated in the name of creative licence: that the attempted flight was successful, for example, and that the scientist had flown it himself, while according to most accounts, what the Indian scientist supposedly sought to create was an unmanned aircraft.

Much of Shivkar Bapuji Talpade’s life and how he went about inventing his flying machine is cloaked in mystery. He is a much-discussed subject on some websites, much of the conversation soaked in faux nationalism and less in research. According to most versions, he invented the aircraft by drawing upon the ideas of aviation outlined in Vedic texts. These versions claim that Talpade held a thrilling demonstration of his aircraft in 1895 on Bombay’s Chowpatty beach in front of a large crowd that included well-known names, including the king of nearby Baroda. The aircraft is said to have attained an elevation of nearly 1,500 feet and stayed airborne for several minutes. Some claim Talpade used mercury as a fuel for the aircraft, while others say it was some type of urine. There has been a renewed interest in his story of late.

Apart from the film, a controversial paper on aviation in ancient India at the recently held Indian Science Congress has also detailed Talpade’s work.

Talpade is believed to have been born in 1864 in the Pathare Prabhu community in a South Mumbai home. A member of the Arya Samaj, and keenly interested in both Sanskrit and the Vedas, Talpade worked as a technical instructor in the art and craft department of Sir JJ School of Art. It is here, it is said, with an easy access to materials that he built his aircraft.

Vibhu Puri, the director of Hawaizaada, claims to have researched the subject of the film for around four years. He tried to find relatives of Talpade and those who might have known about his work, and checked with various libraries and institutes for any written works on Talpade. “I found little, though. And much of what I did find seemed to contradict each other,” he says, adding, “But I knew the flight happened. So I went about creating a fictionalised version of it. The film isn’t a biopic. But it is based on true events.”

The film, however, shows Talpade’s character actually flying the aircraft. The plane itself is depicted as a glider with wings, whereas in most versions, the aircraft is supposed to be cylindrical in shape and without wings.

The most detailed work on Talpade has been done by the architect-turned- historian Pratap Velkar in his book Maharashtracha Ujwal Itihaas, written around 20 years ago. Velkar, who grew up in Girgaum in South Mumbai, lived two buildings away from where Talpade had lived. “By the time I was growing up, Talpade had been long dead, and the house itself had been sold to a Catholic family. But my father would always point to the house and tell us about how Talpade had gone about creating his aircraft,” he says. According to Velkar, his father had also attended the Chowpatty flight demonstration.

While writing the book, Velkar began searching for any of Talpade’s living relatives. He was able to contact Talpade’s niece, Roshan, and his nephew, Chandrakant Talpade, both of whom have since died. There were no direct surviving relatives of Talpade himself, Velkar found, since Talpade’s only son had remained childless. Velkar also came across some essays written by one of Talpade’s students, P Satawlekar. From Roshan and Chandrakant, Velkar learnt about how Talpade had gone about building the aircraft, and from Satawlekar’s essays he learnt about how most individuals at the time had thought Talpade was being foolish in his pursuit.

Contradicting the versions that claim Sayaji Rao Gaekwad III, the then Maharaja of Baroda, was present at the Chowpatty show, Velkar claims there were very few people gathered that day. “It wasn’t a well-publicised event. It was more like a sporting event. Apart from a few curious onlookers, the only people present were some friends who had showed up to watch him,” Velkar says.

According to Velkar, Talpade’s marutsakha was a cylindrical structure made of bamboo. The structure was apparently filled with liquid mercury. “When the mercury reacted with sunlight, it released hydrogen. And because hydrogen is lighter than air, it helped the contraption fly,” he says. But the plane did not get very high or stay up too long. “It rose to just a small height and crashed within minutes,” says Velkar.

As the story goes, Talpade based his work on the Vaimanika Shastra and was guided by a mystic named Subbaraya Shastry, played in the film by Mithun Chakraborty.

The Vaimanika Shastra is said to have been composed by a sage named Bharadwaja thousands of years ago, and transmitted via psychic channelling to Shastry. The work contains some 3,000 shlokas in eight chapters and claims that the ‘vimanas’ mentioned in the Vedic epics were advanced flying machines.

According to Madhav K Deshpande, a secretary at the Arya Samaj in Pune who recently wrote a book in Marathi on the subject and claims to have found some handwritten notes by Talpade, “The theory of aerodynamics was always present in our Vedas. What Talpade did, with the help of Shastry, was to put that theory into motion.”

Academics have however debunked the Vaimanika Shastra. In 1974, scientists of Bangalore’s Indian Institute of Science published a study after examining the theories put out in the treatise, and concluded that not only isn’t the work ancient (it cannot be dated before 1904), most of the theories put forth are un- feasible. Noting that Talpade built models under the guidance of Shastry but did not succeed in making any of them fly, the researchers write, ‘The planes described above are the best poor concoctions, rather than expressions of something real. None of the planes have properties or capabilities of being flown; the geometries are unimaginably horrendous from the point of view of flying; and the principles of propulsion make them resist rather than assist flying.’ They also point out how a chapter titled ‘Samarangana Sutradhara’ stated that a detailed description of their construction and other features could not be disclosed, lest the knowledge be used for evil purposes. ‘We are tempted to remark,’ the scientists write, ‘that he did not know!’ They further write, ‘What we feel unfortunate in history is that some people tend to eulogise and glorify whatever they can find about our past, even without valid evidence… We feel that the people connected with publication—directly or indirectly—are solely to blame either for distorting or hiding the history of the manuscripts.’

According to Velkar, after the failure of the show at Chowpatty, Talpade tried to raise funds to build another aircraft. He unsuccessfully asked for funds from the then Maharaja of Baroda and there is even one recorded instance of his appealing to a group of businessmen in Ahmedabad. The damaged aircraft used in the Chowpatty show was meanwhile housed in a warehouse in Mumbai’s Malad area. Roshan apparently told Velkar about how the bare chassis of the damaged aircraft gathered dust for several years and the children of the family would sit in it, pretending to fly.

According to some versions, the aircraft was later sold to Rallis Brothers, a Tata company, and, according to some others, to Hindustan Aeronautics in Bangalore. When Velkar tried to find out, he learnt from Roshan and Chandrakant that an Air Force official, Air Vice Marshal (retired) SB Goyal, had taken some parts of the aircraft and the research papers that Talpade had written from the family. When Velkar tried to contact Goyal, he was told the papers had been passed on to a scientific officer in the Union Defence Ministry, GH Bedekar, who had by then retired and was living in Pune. Bedekar refused to share the text with Velkar. “He told me that he had studied the research papers in detail and that they reveal Talpade was unsuccessful,” says Velkar.

The story of Talpade’s experiments has however come as a boon to conspiracy theorists. Ganesh J Acharya, an advertising professional who some years ago floated an online signature campaign to get Talpade’s story incorporated into school syllabus books, claims that the incident is part of a long history of British suppression. “The British tried to ensure Talpade’s work did not succeed. They did not want an Indian to build the first aeroplane. After the Chowpatty show, the British tried to make sure that Talpade could not continue with his research,” he says. “Unfortunately, many of us still don’t know anything about him.” According to him, after the film is released, he will start the signature campaign again, so more people can push for Talpade to be incorporated into history text books.

According to Velkar, it is difficult to prove whether the incident occurred at all, since it was back in the 19th century. “I agree we have very little evidence to say whether Talpade was successful or not in creating a flying machine. But what is interesting is that someone way back then had tried.”