The few Radia tapes that have emerged shed light on how the media and government are influenced. The ones that remain with the Centre reveal disturbing flows of money. 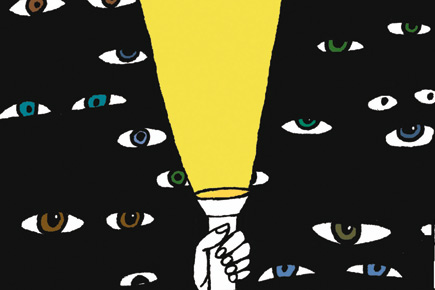 The few Radia tapes that have emerged shed light on how the media and government are influenced. The ones that remain with the Centre reveal disturbing flows of money.


The few Radia tapes that have emerged shed light on how the media and government are influenced. The ones that remain with the Centre reveal disturbing flows of money.

The hundred-odd Radia tapes that have now been heard and reheard across the country indicate the widespread reach of corporate interests within the media and government. They indicate a country where decision-making has been isolated from the normal democratic process and is controlled by a few powerful interests through mutually beneficial networks that manipulate not just news, but also governance.

Now talking to Open, Home Secretary GK Pillai has remarked (read interview) that these tapes are but a small fragment of the 5,000 or so tapes currently being examined by the Central Bureau of Investigation (CBI): “I believe there are far [more] serious portions of the transcripts involving hawala transactions and tax evasions. What has so far come out is what I call titillating versions… The tapes are between the CBDT and the CBI. The Finance Ministry will do its job. And then the truth will come out.”

If the initial hundred are just ‘titillating’, then clearly the remaining taps say something even more tragic about our system. The Home Secretary has clearly hinted that the information on the tapes involves large and illegal financial transactions. The process of unveiling this information requires us to go back to February this year when some journalists first laid hands on a 14-page document that eventually led to the downfall of A Raja and emergence of the Niira Radia tapes.

The document consists of correspondence between CBI and Income Tax (IT) officials regarding information obtained from the Radia phone taps carried out in 2008 and 2009. The last seven pages of the correspondence do not bear a letterhead but provide damning details of the information that was available through the phone taps about corporations, lobbyists and the media. Since much of this has been confirmed by the subsequently leaked Radia tapes, the contents of the document now bear re-examination.

The clout of the people named in the document was clear from the beginning. One of the journalists who first obtained a copy of this material called up the CBI soon after, in February, to confirm the material he had in hand (and yes, there is reason to believe the source of the leak was a business house opposed to the interests Niira Radia represents). He was told to hold the publication of the material till the end of the month because the CBI planned to arrest Radia and prior publication could lead to her fleeing the country. When he called back at the end of February, he was told to wait till 13 March, when a building for the Tamil Nadu Legislative Council was to be inaugurated in Chennai with senior Congress leaders in attendance.

When in mid-March, with no arrest in sight, the journalist called back one of the officials, he was told to go ahead and do what he could, the officials were helpless. All three officials named in the leaked correspondence—Vineet Agarwal, DIG; Milap Jain, DG IT; and Ashish Abrol, joint director IT—had been transferred from their jobs. It was argued by the CBI that Agarwal’s term had expired, but an extension in such cases would not have been abnormal. This, combined with the decision to move the other two officials, reveals the clout of those threatened by the revelations. The story was broken by April end in The Pioneer by J Gopikrishnan, whose 2G scam coverage finally brought about Raja’s removal.

In May, when Open first gained possession of the correspondences, all it took was a call to the Income Tax Department to confirm that the material we had in hand was genuine (the editor of Mint, defending his decision not to carry the story, has argued that his editors and reporters could not verify the contents of this document—perhaps he should consider re-hiring). While some of the material has since become public, much of it has not because of the difficulty involved in confirming the specific information noted there.

Many hesitated in printing the information that then came to light and has since been confirmed by the Radia tapes. At the time, information such as this—‘On Mrs Radia’s & Kanimozhi’s behalf Barkha Dutt and Vir Sanghvi were negotiating for ministerial birth (sic) DMK members especially Raja with Congress members’—seemed implausible.

Other instances listed there—‘Tata through Voltas is in touch with Neera [Niira Radia] and Ratnam, CA of [Rajathi] Ammal, [third] wife of M Karunanidhi’—have also been confirmed by recordings released so far, one of which clearly has Radia talking about a waiver of rent, which according to Ratnam had been agreed to by Krishna Kumar (director, Tata Sons), who, Ratnam says, had in turn spoken to Voltas.

Given such confirmation, it now makes sense to look at what else the 14-page document suggests. The document relates to the time when the main case of the 2008 allotment of 2G spectrum had been assigned to the CBI by the Central Vigilance Commission (CVC). Till early November 2009, the CBI officers involved in examining the case had never even heard of Niira Radia, whose clout depended on low visibility and easy access to power. When a few journalists first told them about Radia, the officers had to turn to Google for help.

Armed with this new knowledge, on 20 November 2009, a letter was sent by Vineet Agarwal, then the CBI’s DIG in charge of the case, to Milap Jain of the IRS, DG IT (Investigation), asking for access to the phone taps: ‘The CBI is presently investigating a criminal case… The allegation being investigated is relating to criminal conspiracy between public servants and private persons in grant of UAS [Unified Access Service, which are basically telecom licences allowing the transmission of voice and non-voice messages in a particular region] licences in the year 2007-2008. It has been reliably learnt that certain middlemen including one Ms Nira [sic; she changed her name to Niira, presumably on numerological advice, which must now be considered very suspect] Radia of M/s Noesis Consultancy were actively involved in the above mentioned criminal conspiracy…’

Today, listening to the protestations of innocence by the various journalists implicated in the conversations with Radia, these letters, which were published in the media in May, gain added weight. Even if the journalists did not know what they were doing in 2009, by May 2010 the extent of Radia’s operations was clear. She was no mere lobbyist; the charge against her was of criminal conspiracy. They had six months till November 2010 to come clear on their involvement with Radia; none did.

Replying to this letter on 20 November 2009, Ashish Abrol, joint director of Income Tax, noted, ‘On the basis of specific information received from the CBDT; the telephone lines of Ms Nira Radia and some of her associates were put under observation after obtaining permission from the Home Secretary. Ms Nira Radia is chief of M/s Vaishnavi Corporate Consultants Pvt Ltd, M/s Noesis Strategic Consulting Services Pvt Ltd, M/s Vitcom  and M/s Neucom Consulting. These companies are involved in consulting in Telecom, Power, Aviation and Infrastructure. These entities not only manage the media but as per conversations, apparently try to influence policy changes and decisions of the various government departments to suit the commercial requirements of their clients. 1.  From conversations it appears that Ms Nira Radia might have had some role with regards to the award of Telecom licenses. In a conversation she guides a new telecom operator on the need to delay the inflow of funds from the overseas investor and not to give the impression to the government that there has been any ‘windfall’ profit…’

Clearly then, one major component of the 5,000 or so tapes still not made public are those that seem to reveal the role of Niira Radia in the flow of funds from abroad for the purchase of telecom licences. Again, the correspondence is revelatory and is now being borne out by other reports in the media.

According to the document, Radia’s role in the spectrum allotment was extensive, and this is where the investigations are now focused. The claims in the document are damaging for much of the telecom sector.

‘Mrs Radia claims to be a very close associate of Shri Raja, Telecom Minister and claims to have been instrumental in getting licenses to the following:
» Swan Telecom

The extent of loss to the Central exchequer is apparent from transactions involving these companies. The licence fee paid by Swan was Rs 1,537 crore; Etisalat paid  Rs 4,200 crore for its stake. Unitech bought its licence for Rs 1,661 crore and sold 60 per cent equity for Rs 6,120 crore to Norway-based communication company Telenor. Neither Unitech nor Swan at the time of their purchases had spent any money on setting up telecom facilities. The document also contains specific information about the ownership of Swan and Aircel.

Just last month, the Telecom Regulatory Authority of India (Trai) recommended the cancellation of 15 licences of Etisalat DB, 10 licenses of Videocon, eight of Uninor (the current name of Unitech Wireless after Telenor bought in), and five licences of Aircel.

An Economic Times (ET) report dated 29 November 2010 titled ‘Tatas loan to Unitech in 2007 under scanner’ seems to lend some substance to one of the major claims in the document about the Tata Group backing one of the licence holders, Unitech, to obtain additional spectrum.  Says the ET report: ‘Investigating agencies probing the allotment of mobile permits by former telecom minister A Raja are examining a transaction between Tata Realty and Infrastructure Ltd (TRIL), a Tata Group company, and real estate firm Unitech in 2007. People familiar with the investigation say a loan of around Rs 1,600 crore was advanced by TRIL to Unitech in a deal that investigators believe was facilitated by Niira Radia… [The money] may have been used by Unitech to pay for a 2G GSM licence awarded in early 2008…’

While Unitech told ET that “we would like to clarify that we have not availed any loan of Rs 1,600 crore from Tata Realty”, TRIL CFO Kishore Saletore, while also denying any such loan, added, “TRIL had identified a large tract of non-agricultural land in Gurgaon for commercial and residential development, against which a commercial advance was paid to Unitech in 2007. Subsequently, in 2008, the commercial transaction was renegotiated for a smaller size of land which is currently under development.”

Compare this with information in the document: ‘Nira Radia had arranged for an ‘advance’ for Unitech group from Tata Realty of which outstanding of Rs 650 cr is spoken of… conversation suggests that this advance has to be projected as one for a vague purpose though some 500 acres of land is talked about.’
This, as Pillai suggests and the 14-page document bears out, is only the beginning of what is likely to become public over the near future. And it is then that those who find something totalitarian about the tapping of Radia’s phone will come to realise that the real tragedy in this case lies not in the phone taps, but in what they reveal.