Three years after the Mumbai attacks of 26/11, India’s response to terror remains unchanged 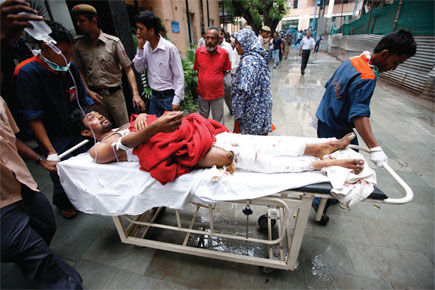 Three years after the Mumbai attacks of 26/11, India’s response to terror remains unchanged


“This is a cowardly act of a terrorist nature. We will deal with it. We will never succumb to the pressure of terrorism”—Prime Minister Manmohan Singh, after the Delhi High Court blast of 7 September.

“The Government will do everything in its power to prevent such attacks in future”—Singh after Mumbai’s blasts of 11 July.

“We will take the strongest possible measures to ensure that there is no repetition of such terrorist attacks”—Singh after the Mumbai serial attacks of 26 November 2008.

And yet, when it comes to India’s response to such terror attacks, nothing changes—not even the vocabulary used by the Prime Minister to condemn them. In his latest statement, though, after the recent Delhi High Court blast, Manmohan Singh offered an insight into New Delhi’s psyche. In a near-Freudian moment, he declared India’s resolve not to “succumb to the pressure of terrorism”. These words give away the essence of the Centre’s response to terror: no matter how many people lose their lives, the Government will not let itself be pressured; but pressured to what? Act?

After 9/11, in contrast, the US government made sure that not a single terror attack took place on its soil. Over a thousand US organisations and security-related companies have been working in unison since then to prevent any further mayhem in America. Not only that, it tracked down 9/11 mastermind Osama bin Laden in Pakistan and put him to death earlier this year. But in India, we never seem to learn any lessons. Consider this: after every terror attack, how many times have we heard, “We had prior intelligence”? Almost every time. But what happens to these ‘inputs’? Nothing. Also, how many times have we heard this gem: “It was a terror attack”? As if we would have thought that LPG cylinders had exploded one after another in a particular city in a sequence of coincidences, or that a meteorite had hit people in a crowded market or on a train.

Within minutes of a terror attack in India, the entire State machinery, from a beat constable to the Union Home Minister, turns up on TV screens, offering details of the blasts. From there on, it is downhill. In a matter of hours, police sketches of the suspects are released, and they all look the same. Then, a minute-by-minute update of the investigation is shared with the media. ‘Traces of plastic explosives,’ ‘E-mail sent from Kashmir,’ ‘Two nabbed in Rajasthan,’ ‘One car confiscated,’ say televised ticker tapes in their ‘Breaking’ efforts to enlighten viewers. And, finally, the Centre makes the same old assurances: we will ensure there is no repeat. It’s hard not to feel drowsy.

The truth is, India has failed miserably in thwarting terror, and year after year, the country remains poorly equipped to counter the threat. No wonder people have quit even reacting to it. They shrug and move on. They have no choice. What the media hails as the ‘resilience’ and ‘spirit’ of the city/country is essentially a resignation to the fact that nothing will change. It has become part of the national culture, in a way, and it suits the State. After every attack, everyone goes through the paces in TV studios and newsprint like wind-up toys. There is talk of installing CCTVs. Of tightening security at railway stations. Of safeguarding airports. Even the phrases summoned to this discourse are predictable; one could actually reprint a news report published in 2008 or 2006 without anyone noticing.

The Government’s reflex response is to announce the formation of a new ‘grid’ over an existing maze of organisations that have done little to combat terrorism. After the 1999 Kargil War, a report by a Group of Ministers had suggested a complete overhaul of the country’s security apparatus. Not much heed was paid to it. The Mumbai terror strikes of 26/11 were to the UPA what the Parliament attack of 13 December 2001 was to the previous NDA Government. Expectations were raised of radical changes in the way India dealt with the threat. But all the UPA Government did was hand the Home Ministry over to P Chidambaram and create the NatGrid (National Intelligence Grid) that was supposed to link all databases available with India’s police and intelligence agencies. Chidambaram has been in charge of the Ministry for almost three years now, and seven terror attacks have taken place in that period. Almost all of them remain unsolved. As security expert Ajai Sahni says, “This is all rubbish. This NatGrid etcetera is not going to help us at all. It is the police station and police post, located in the very heart of communities, that can raise the best intelligence and provide the quickest responses—if adequately mandated, resourced and enabled. It is the normal police apparatus that first learns of and responds to a terrorist attack, and if the potential [damage] of such an attack is to be neutralised or even contained, these first responders have to be fully equipped and trained to react.” But is New Delhi interested in empowering cops? Why would it be, since many politicians themselves have criminal cases pending against them, as Sahni says.

According to WikiLeaks, Manmohan Singh confided in a senior American diplomat that ‘he did not sleep well at night’ knowing that intelligence information ‘demonstrated that the threat of terror attacks after Mumbai was far from over’.

That admission was in mid-2009, and the threat is still far from over. In fact, in the past few years, the threat has worsened. There is now even a homegrown outfit in the shape of the Indian Mujahideen bent on wreaking havoc across the country. But the establishment, so pleased that Al-Qaida has no single cell within the country, stayed in denial about the phenomenon for much too long. Playing the Pakistan blame game was a lot easier.

Even now, the Government finds it hard to acknowledge the threat. An exception was a vague reference by the PM at a meeting of the National Integration Council. “We need to identify and address the causes of radicalisation of some of our youth,” he said. He also highlighted the need to “continuously upgrade and strengthen our investigating agencies”. But, as India’s vulnerability to terror shows, nothing has really changed. Expect many of the same old pledges to be regurgitated from time to time. We are not even sure whether the PM still gets restless sleep after a terror attack.