The Man Who Faked His Murder

Software engineer Sreerag Subramanian was found dead, tied and gagged with duct tape, in his car. An open and shut case of murder. Or was it? 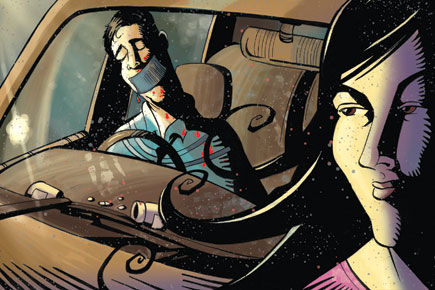 Software engineer Sreerag Subramanian was found dead, tied and gagged with duct tape, in his car. An open and shut case of murder. Or was it?


On his return from work, Sreerag Subramanian, a software engineer with Hewlett Packard in Bangalore, called his mother in Palakkad. This was the evening of 21 May. By the account of the police, they spoke for 10 minutes, during which he asked how she was and whether she had taken her medicines and had her food on time. He ended the call by saying he missed and loved her. Sreerag then went to his aunt’s house for dinner, after which he stayed back a while to play with his cousin’s child, taking the little one around the house on his back on all fours. His uncle admonished him for keeping them up so late, and asked him to either stay over or get back home.

Sreerag pretended to drop a pen and fell at his aunt’s feet for her blessings. He then left for the flat he shared with Vivek Bhoshy, an engineering college friend. Once he reached home, he whisked out his laptop. At some point, say the police, he suddenly logged off and started putting on a pair of jeans. Bhoshy asked where he was going. “Just driving around,” he replied. It was not an unusual thing to do. He had bought a Volkswagen Polo just a month earlier, and often drove it at odd hours. Around 1 am, he parked the black car at a secluded spot in the locality of Mahadevapura.

Then, as the police account goes, he did something strange. He picked up a roll of duct tape he had in the car and began taping his own legs together. Altogether, he wound 16 layers of tape. Satisfied that he could not move his legs anymore, he tried tying up his hands. It proved difficult. Cutting the tape, particularly—the scissors were too unwieldy. He tugged at it nevertheless, but all he achieved was the tape twirling into a string. He gave up. He then popped 16 tablets of Gardinol into his mouth, one of which fell back onto the seat as he took a swig of water from a bottle to swallow the pills.

Next, he wound 13 layers of tape around his mouth and pressed it against his face to make it stick. After that, he put three plastic covers over his head. The Gardinol started working. Its active ingredient is sodium lauryl sulphate, a foaming agent used in soaps, shampoos, detergents, toothpastes and other products that foam. It is also a poison that blocks the lungs’ access to air and suffocates its victim—a surer death than what sleeping pills assure.

Residents of Mahadevpura noticed the black car in the morning. Those who peered into it saw a man on the backseat, his head in a plastic bag and legs skewed sideways. They tried to open the doors, but the car was locked. The police arrived at around 10.30 am. They traced the registration number, reached the doorstep of Sreerag’s aunt, and then Sreerag’s flat half a kilometre away. There, they found a set of duplicate keys, and had the car opened. By now, forensic teams and a dog squad had arrived.

The sniffer dog led its handler back to Sreerag’s flat, an indication that the victim had driven to the spot from his home. The police started recording the proceedings on video.

“Prima facie, it looked like murder,” says Inspector KS Nagaraja, Mahadevapura Police Station’s house officer. At first, the police thought the HP employee had been robbed and killed. So they registered a case of murder.

But the police were not entirely sure it was murder. They were perplexed by the duct tape, pair of scissors and car key found next to Sreerag on the back seat. They questioned his roommate Vivek Bhoshy, who said that the roll of duct tape was similar to what they usually kept in their flat, and that Sreerag often used large quantities of it since he liked to keep everything well packed. But even if the tape and scissors were Sreerag’s, there was still the possibility of its presence in the car when he was attacked; his killer/s might have found it handy.

Bhoshy told the police that Sreerag was in love with a girl with whom he would talk for long hours on his cellphone and exchange emails and SMSes. The odd part was that Sreerag had never seen the girl. In following this lead, the police took Sreerag’s laptop to his HP office and asked his employers to give them access to his email account.

Sreerag’s last mail had been sent at 2.37 am on 22 May. This, they figured, was after he had parked his car and got onto the backseat with the laptop. It was to a girl he called ‘Jenny kutty’ in which he said he would not trouble her anymore and that she would soon learn what became of him.

It was beginning to look like suicide, not murder. Sreerag’s call records featured hundreds of calls to a particular number. It was Jenny kutty’s, as the police suspected. “Around 11,000 messages had gone back and forth,” says the inspector, “He had messaged her 7,500 times, and she, 3,500 times.” The cops called the number and summoned her to the police station. The story she told them was stranger still.

On 21 January, a telemarketer named Gayathri, whose full name is Jennifer Gayathri Lourdeswamy, calls Sreerag to sell an insurance product. He speaks politely, unlike the usual responses she gets to her cold calls. She calls him persistently, and over time they become phone friends. They exchange personal contacts. Gayathri, a team leader at the call centre, is educated only up to class 7, but her conversational English is excellent. As the friendship develops, she tries to impress him with lies about getting an MBA. She also says she is an aspiring fashion designer keen to showcase her clothes at fashion shows in Milan, for which she is saving money by working at the call centre.

Sreerag gets infatuated and takes to calling her Jenny kutty, an affectionate nickname. He sends her his pictures and asks her to do likewise. Gayathri gets a good looking college girl’s photograph and mails it to Sreerag. Within a few weeks, their exchange of messages and mails turns into a daily affair. “He grew desperate to meet her,” says Inspector Nagaraja.

Sreerag buys her a teddy bear and wants to gift it in person. His phone friend says she cannot meet him because she is engaged to be married and will soon be leaving for London a wedded woman. Sreerag demands to know why she cannot break off the engagement and meet him instead. He also wants to see a picture of her fiancé. Gayathri finds a picture of a stranger on the net, and sends it to him. She then asks her friend to pose as her mother and advise Sreerag to stop calling her. This tips him over, turning him suicidal.

Gayathri, who was booked by the police for cheating and impersonation, told the police that Sreerag had filled a void in her life. No one had loved her so much, she said, but since she had lied so grandly, she simply couldn’t face him in person. “She feared he would reject her if they came face-to-face,” says Deputy Commissioner of Police KS Bhat.

Sreerag’s parents, bedridden in their Palakkad home, and his brother, who worked in Mumbai, had no clue what he was going through, though. Nor did his acquaintances in Bangalore. “He was a normal 25-year-old geek at work too, glued to his laptop and living life to the full,” says an HP colleague who does not want to be named.

When Open called Gayathri, she did not answer the phone. Out on bail, she has been avoiding the media, though she told another reporter that she felt responsible for Sreerag’s death and had not eaten for four days.

Gayathri says she was waiting for his call the night he died. After she received the mail, she sensed something was seriously amiss, and called him several times—but there was no response.

Sreerag, who used to scour the internet for medicines to buy his mother, kept himself well informed on drug formulations; a post-mortem report confirmed that he died not of asphyxiation by plastic bags but of Gardinol poisoning.

Sreerag’s inspiration for this duct-tape set up, according to DCP Bhat, was On Death Row, an American crime show of which he had a DVD. One of its episodes has a convict who ties his victim with duct tape and puts a bag over the head.

But, if the man was heartbroken, why would he want his suicide to look like murder? To shield her from being held responsible for his death, says DCP Bhat. “As he explained in his last mail,” he says, “he had deleted her phone numbers from his mobile, and the pictures and mails they had exchanged from his hard disk—‘so that no one will be able to contact you in case something happens to me. I don’t want you to get tangled up in all this:-’.”

“By making it look like murder,” says DCP Bhat, “he wanted to end this chapter in his life and deflect attention [from his heartbreak].”