The Loneliness of Kejriwal

His differences with Anna are public, but he and his cohorts can gather no support on their own 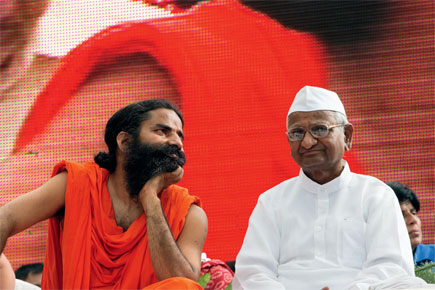 His differences with Anna are public, but he and his cohorts can gather no support on their own


NEW DELHI ~ As three prominent members of Team Anna—Arvind Kejriwal, Gopal Rai and Manish Sisodia—sat on fast-unto-death on 25 July at Delhi’s Jantar Mantar, they thought time would now be on their side. They hoped that this display of sacrificial zeal for the cause would help them escape the shadow of the man whose indefinite fast at the same venue last year had turned him a national figure.

But, in a sense so far, time has worked against Kejriwal and other prominent members of the core committee of India Against Corruption (IAC) who are enraged at Anna Hazare’s unilateral decision to align the anti-corruption agitation with that of Baba Ramdev, who is seen as a man affiliated to the BJP. According to a member of the core committee, Manish Sisodia, Gopal Rai, Prashant Bhushan, Shanti Bhushan and Sanjay Singh are with Kejriwal on this issue, while Kiran Bedi and Kumar Viswas are with Anna Hazare.

Sources say that differences emerged a few months ago at a core committee meeting held in New Delhi on 2 April. At that meeting, Kejriwal’s suggestion that India Against Corruption should field candidates in the upcoming Assembly polls in Himachal Pradesh was brushed aside by Anna Hazare. The differences in the IAC camp widened when Hazare, going against the advice of his closest aides, started sharing his stage with Ramdev.

Kejriwal and Ramdev have shared angry vibes for some time now. Their mutual antipathy became public on the occasion of a day-long fast organised jointly by the two sides at Jantar Mantar on 3 June. In his speech, Kejriwal attacked Prime Minister Manmohan Singh and his Cabinet colleagues whom Team Anna had accused of indulging in corruption. He mentioned the names of Mulayam Singh Yadav, Lalu Prasad, Jayalalithaa and Mayawati. Soon after Kejriwal finished his speech, Ramdev took the microphone and said,“Today, we thought that we will not take anybody’s name. But Arvind took names.” In response to this snub by Ramdev, Kejriwal walked out of the fast venue in a huff. Hazare maintained a cold indifference all this while, doing nothing that might have harmed his rapport with the yoga guru.

Given all that had happened, when Kejriwal, Gopal Rai and Manish Sisodia sat on their fast-unto-death last week, those members of Team Anna who were opposed to Hazare’s whims guiding the movement expected that even a modest public response to this new round of agitation would work to their advantage; it would grant them an independent stature so that they could pursue their own ambitions in public life without the octogenarian agitationist.

However, within two days, it became clear that Kejriwal and Co had failed to evoke any semblance of a rousing response from people at large. The situation was salvaged only after Ramdev stormed Jantar Mantar on 27 July with his large band of supporters, who left the venue as soon as their leader did, reducing the crowds once again. This seemed like proof that Anna had not miscalculated the benefits of his collaboration with the yoga guru.

And even before Kejriwal and his subgroup within Team Anna could react, Ramdev turned up in Gujarat, sharing a stage with Narendra Modi and showering the BJP Chief Minister with praise. Sanjay Singh, a core committee member and one of Kejriwal’s closest aides, hit out at Modi right away, calling him a “murderer of humanity”. Kejriwal himself had some remarks to make, though he took care not to name Ramdev: “People praise [Modi] for introducing development. Do you see him as the future of India?”

Those words were widely reported, but, apart from creating momentary confusion among IAC supporters, it did not help their cause. For, Anna Hazare chose to remain silent on this issue.

And by the time Anna joined Kejriwal, Rai and Sisodia on their fast on 30 July, all seemed forgiven and forgotten. There were no more noises made against Ramdev at Jantar Mantar, with Kumar Viswas setting the tone by saying that the yoga guru was free to meet whoever he wanted. Not to be left behind, Kiran Bedi echoed those words, adding a few more by way of justification of the Anna-Ramdev embrace. “The goal is the same,” Bedi said, “Ramdev is free to meet anybody. We have nothing against Ramdev meeting anybody. We have also met opposition leaders earlier.”

The silence of Anna’s detractors in his team means that they have accepted the entire Ramdev interlude as a fait accompli. Or so it would seem till they show signs of resistance again.