The Englishman Who Wants to Be Indian

Besotted with the idea of India, Daivid Hopkins even went on a hunger strike to secure Indian citizenship, but in vain 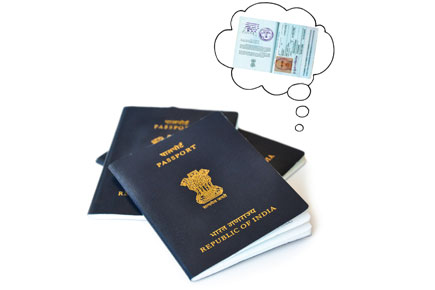 Besotted with the idea of India, Daivid Hopkins even went on a hunger strike to secure Indian citizenship, but in vain


On page four of Daivid Hopkins’ application for Indian citizenship, he gives his reasons for doing so. ‘I am a sanyasi [ascetic] of the Ramakrishna Vivekananda order… Having fully adopted the religion and culture of India—my country of birth now seems to be a foreign land whose culture is completely different—I have come to love India and her people. I have come to love her cities and villages… the holy Ganges and Himalayas, and as a true son of Mother India, I seek an opportunity to serve her the best I can (which could not be possible from any other land).’

It has been 25 years since then, but Hopkins, British by birth, has not been able to become an Indian. His citizenship was rejected despite his having lived in the country, largely in Moradabad, for 15 years, filing court cases in the Madras High Court and Supreme Court and going on a two-week-long hunger strike in 1985. Hopkins now lives a disappointed man in Durham, UK.

The case of Daivid Hopkins is curious. Usually, it is the other way round. There has been a steady flow of Indians who have made—legally and illegally—the UK their home. Till 1984, UK citizens did not need a visa to visit India, just as Indians did not need a visa for the UK. The then British Prime Minister Margaret Thatcher with drew this arrangement, and the Indian Government did likewise. “They then gave the UK people already in India a six-month tourist visa which could not be renewed unless one left the country,” says Hopkins, “They do not publish their guidelines on these matters and seem to keep changing the rules. As one gets older, one does not like the insecurity that such a position would bring, so I decided to apply for citizenship.”

In June 1994, Daivid went on a hunger strike at Delhi’s Jantar Mantar, a famous protest location not far from Parliament. Looking back, he says, going on hunger strike was an interesting and enjoyable experience, though ultimately futile. There were many people fasting beside Daivid, like Sikhs protesting the 1984 riots after Indira Gandhi’s death, and Muslim butchers who’d been banned from slaughtering livestock in Delhi. There was also a group of Bihari teachers who would get him water. But Daivid was the only one who actually fasted. The others ate on and off. On the 14th day, he gave up, because he figured nothing much was coming of it.

“I walked directly to Lok Nayak Bhavan. The lady at the reception half laughingly said, ‘Oh, so you are the chap doing the fast,’ and took me to who I think was the undersecretary, Naini Jaya Sheelan, who agreed to give me a five-year visa. Since I wished to stay in Bangalore at that time, she said I should apply there. So I went back to the UK to wind up my affairs. I put my house up for sale. But when I returned to Bangalore and applied for a five-year visa, nothing happened—I presume that the secretaries had changed.”

Hopkins can’t but feel philosophical about it. “In the scale of world problems, it’s not really great, is it?” he asks, quite used to resorting to Indian philosophy to make sense of things—equanimity under all circumstances is the true practice of a sanyasi. He has never contemplated marrying an Indian for citizenship, as that would only change the nature of his problems. A marriage of convenience isn’t one built on trust, he believes. Also, if he had a family in India, he wouldn’t know how to feed them. In that sense, he can understand why Indians choose so often to migrate to the West.

Hopkins first landed up in India in November 1968, after doing his A levels. He hitchhiked till Afghanistan, and then resorted to buses and trains as public transport was cheap. “In India at that time it worked out to about one rupee per hour—I used that to calculate how long the journey would last,” he remembers.

The journey has lasted a lifetime. When wandering through Meerut in July 1970, he met Lomharsha Sharma, a disciple of Swami Prabuddhananda, who later established a small ashram in Moradabad called Ramakrishna Vivekananda Ashram, similar in aims to the Ramakrishna Ashram, but not affiliated to it. At the ashram, he finally found what he was looking for.

Hopkins returned to the UK to pursue a Master of Philosophy degree in Classical Indian Religion at Oxford University. At Oxford, he realised that doing a PhD on nuclear physics would’ve been easier. “Oxford has a sort of ‘difficulty’ with students who believe in what they present. Most there do not, while I was involved with [Hindu] ideas as a practitioner.” He finds the Indian population rather supportive of religious endeavours. “They all know that achieving God realisation is the aim of human life,” he says, “They may not try for it, but they know they should.”

Living in Durham, UK, what he misses most about India is its people. “Indians have a certain laidbackness,” he says, “In India, things turn out for the best in a weird sort of way. If nothing else, there is always equanimity.” The only thing is, India still has to reconcile its highly evolved religious philosophy with the version of democracy it practises—something he calls a ‘noiso-cracy’: to get anything done, one must make noise. “If there had been many of us, and we had chained ourselves to various railings, then it might have been different,” he says, of his failed protest movement all those years ago.

His views on Britain are similar. When he went on the hunger strike in Delhi, no one, not even the BBC carried the story. In those days, he suspects, the BBC did not carry more than one report from India at a time—and British tourists being kidnapped in Kashmir (as happened then) made a bigger story.

So Hopkins was forced to return to Durham and look for solace in similar-minded Indophiles and various ashrams in the UK. He cooks his own version of vegetarian Indian food that takes only 10 to 15 minutes to prepare. He tries to practise his Sanskrit with his friend who’s a Hindu chaplain to the UK military. There are many other Indians in the UK too, but he finds that although these immigrants are financially successful, they inherit the region’s emotional dryness. A Chinese student at Oxford, he recalls, once observed that the English had nothing personal against any race; they were equally cold towards everyone. In such a place, he feels himself a misfit. “I’m an Indian who took birth in the wrong place,” he sums up. “I don’t gel with the natives here. I fit in so perfectly in India.” But the Indian bureaucracy doesn’t see it that way.