The End of Mandal Politics

It ruled the cow belt for two decades but is now headed for oblivion. An analysis of a social revolution that went wrong 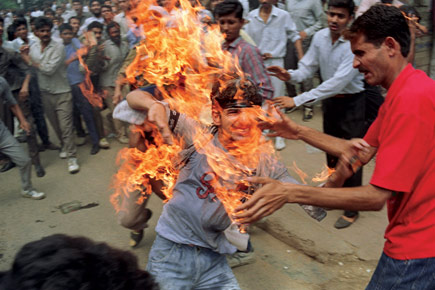 It ruled the cow belt for two decades but is now headed for oblivion. An analysis of a social revolution that went wrong


As the political storm kicked up by Rita Bahuguna Joshi’s barb against Mayawati and the latter’s quick reprisal subsides, Uttar Pradesh (UP) is awakening to a new truth. The Congress is now in a position to become a rallying point for anti-Maya forces. The incumbent state government’s prime challenger so far, the Samajwadi Party (SP), also seems to have realised this—a realisation that led it to make a hasty retreat within hours of joining the Congress in protesting against the law and order problems in the state. The Congress’ aggression, Maya’s quick reaction, and the SP’s apprehension mark the erasure of a line of electoral politics that has defined many an outcome in contemporary India.

Mandal politics, a rebellion against upper-caste dominance, has lost its traction after two decades in which it guided the political destiny of north India to a large extent. The edging out of SP from the main battle line in UP, together with the annihilation of the Rashtriya Janata Dal (RJD) in next-door Bihar signals the end of a chapter that for two decades controlled almost all the political undercurrents of the chaotic cow belt.

Hardest hit are the two Yadav chieftains. The SP’s Mulayam Singh Yadav in UP and the RJD’s Lalu Prasad in Bihar—the prime movers and primary beneficiaries of Mandal politics—are left staring helplessly at a severe depletion in their following. Sure, as individuals, they are far from done. Mulayam is still trying to live up to his dhartiputra (son of the soil) image by engaging in the rhetoric of perpetual struggle to sustain his politics of public interaction. Lalu remains a public performer par excellence, with a unique knack of summing up an occasion with a pithy one-liner or winning gesture. But neither is in a position to revive his political base.

In the early 1990s, the two saw a meteoric rise in their cow belt influence because of OBC assertiveness and because they were seen as sincere, secular and socialist—claimants of a legacy on which the Congress had turned wobbly, with the added appeal of speaking the language of the masses. Today, they are reviled for their alleged mendacity, double-talk and self-serving recklessness.

Mandal politics owes its name and origin to a 1990 decision taken by the VP Singh government at the Centre to implement the Mandal Commission’s recommendation of reserving 27 per cent of all central government jobs by way of affirmative action for Other Backward Classes (OBCs), just as 22.5 per cent had been kept for Scheduled Castes and Tribes (SC/STs). While millions of OBCs found a voice of assertion in the plan, it provoked a severe backlash from urban India’s upper-caste youth who saw job quotas as cramping their career prospects, thus creating a new fault line in Indian politics.

Issues of caste identity attained sudden salience, with Mulayam in UP and Lalu in Bihar the chief OBC beneficiaries in VP Singh’s Janata Dal party—which later split, with the two running their own shows. The Mandalisation of Indian politics saw OBCs exercising socio-political power for the first time ever, with the mass backing of Muslims (and even Dalits in Bihar), in opposition to upper-caste domination.

However, the phase also saw a hardening of identities, which rarely happens without conflict. Mandal politics in the north was accompanied by the rise of Hindutva, a reactionary upper-caste mobilisation roused by saffron slogans of a Ram Temple to replace a 16th century mosque in Ayodhya, UP. This agitation peaked on 6 December 1992 with the Babri Masjid demolition. The event not only led to a surge in saffron support, but also communal violence in many parts of India and a mass switchover of Muslim loyalties from the Congress—seen as twiddling thumbs while the BJP staged its Hindutva act—to Mulayam and Lalu in UP and Bihar. As it turned out, the Yadav duo’s success acted as a bulwark against the north’s saffronisation. Soon enough, the Muslim-Yadav (M-Y) vote became a winning combination in these states. In effect, Mandalisation found consolidation. The BJP did make some gains. But the Congress collapsed.

That was then. Now, cracks in the M-Y vote base, as also the tentative revival of the Congress as a catch-all umbrella party in the north, signals the reversal of Mandalisation. Recent elections have shown a declining trend in the appeal of both the Mandal parties, and if this goes on, even the SP could be routed as badly as the RJD recently was.

Not that the Mandal forces had not faced challenges earlier. Once the original Janata Dal fragmented, successor parties were often hostile to each other. Also, the turn towards identity politics spawned several other formations as well. If the BJP had upper-caste support, the BSP took over Dalit loyalties in UP. In multi-cornered contests, the threshold voteshare to win elections was so low that small shifts, one way or another, spelt big changes. The Yadav duo survived it all.

This time round, however, the Mandal mobilisers may find it extremely hard to win Muslim support back, now that the Congress has started regaining the minority’s trust in UP and Nitish Kumar of the Janata Dal-United (JD-U) has gained similar favour in Bihar. Of the two cases, the Congress is more likely to retain its newfound support than the JD-U, which remains a BJP ally. But either way, the SP and RJD are faced with a bleak future as independent parties.

Observers believe that the M-Y factor had things going well for it for long enough to have made a difference to the lives of both sets of voters, but the minority felt left out of SP’s and RJD’s development thrusts. All that was on offer was basic security of life and livelihood (in the context of saffronisation). All other aspirations were ignored as Muslim support was taken for granted on that basis alone. The Sachar Committee Report of 2006, for example, details the stark conditions of Muslims living in UP, Bihar and other parts of the country. On key socio-economic indicators of human development, they found themselves faring badly under the Yadavs. On economic parameters too, the story was dismal. At least Lalu kept Bihar riot-free during his tenure, thus upholding the minority’s fundamental right to life, but Mulayam could not do even that.

None of the Muslim candidates fielded by the SP in UP and RJD in Bihar won a Lok Sabha election held in April-May this year. The drift of Muslims away from the Mandal bandwagon is evident in this trend, and analysts expect it to gain momentum.

The blow this has dealt to Mandal politics could have a ripple effect in the north. It helps the cause of de-Mandalisation that OBCs, particularly the relatively downtrodden, have grown disillusioned with Mandal politics. It has not proved to be the revolution it once promised, and ‘social justice’—at least as an egalitarian principle—remains a distant dream for most. Social hierarchies in north India remain firm, even if Mandal assertion has changed some of the ways in which different castes engage with one another. Even this is superficial, say some. Dominant OBCs, such as Yadavs, may have wrested some of what was once an upper-caste monopoly, but the rest of the hierarchy has seen little hope of upliftment. As observers quip, even the ‘benefits’ of decentralisation of corruption (which followed in the wake of Mandal politics) could not trickle down very far, leaving lower-strata OBCs as deprived as ever. Worse, the criminalisation of the body politic that allegedly accompanied Mandalisation offered no respite from exploitation. As the downtrodden often complain, all they got was a new class of oppressors.

In short, Mandalisation may well be history. It would be naive to think that the two Yadav chieftains can easily recover from their electoral ‘setbacks’. They are seen by many to have failed the ‘social justice’ agenda. And the secular space yielded to them by the Congress in the 1990s is no longer available, as India’s oldest party consolidates its original appeal.

“Swarg nahin, lekin swar diya (I have given a voice if not heaven)” is a line Lalu Prasad often uses. Indeed, Mandal politics has left behind a new political idiom and vocabulary. The OBCs are all here to stay, as also the Most Backward and Extremely Backward Classes (MBCs and EBCs). But if they find their aspirations fulfilled, it will probably be on an interpretation of social justice that has a durable intellectual basis.