The Case of the One-Armed Murderer

A death sentence awarded to the rapist and murderer of a 23-year-old girl has evoked wild celebration in Kerala, a state known for its liberal leanings. What explains this bloodlust? 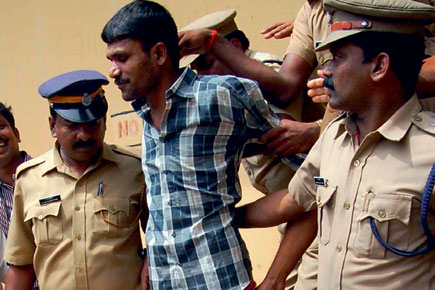 A death sentence awarded to the rapist and murderer of a 23-year-old girl has evoked wild celebration in Kerala, a state known for its liberal leanings. What explains this bloodlust?


On 2 February 2011, 23-year-old Soumya, one of Kerala’s thousands of working women, took a train from Kochi to return to her parents’ home in Shoranur. Employed as a salesgirl in a Kochi shopping mall, Soumya was the only breadwinner for her family. Her younger brother was a student, the father was estranged from the family, and the mother worked as a domestic help. She was going home because her family had selected a potential groom for her, and she was to meet him. At Thrissur, a big junction just one stop before her destination, the ladies compartment in which she was travelling emptied out.

Much of what happened after that is from the police account. Once the train left the junction, a one-armed man clothed in beggars’ rags suddenly turned up in the ladies compartment, having walked through the connecting door of the next. He attacked Soumya, and, when she resisted, threw her off the train. The train was slow enough for him to leap out after her. He then took the bloodied, barely-alive Soumya into the nearby bushes and raped her. Five days later, Soumya succumbed to her injuries.

It would have been forgotten as any other rape and murder, but one year later, this is a crime that traumatises the conscience of Kerala unlike anything in recent times. This was because the very next day of the murder, something dramatic happened. A pastor travelling in the next compartment told the police that he had heard the cries of a girl. He had sought his fellow passengers’ permission to pull the train’s chain and bring it to an emergency halt, but everyone except one young man discouraged him; they were keen to reach their destination on time. The pastor relented and did nothing. But he got down at the next station and informed the station master and guard. The next morning, he read about the assault in the newspapers and went to the police. He was also the only passenger who had noticed the one-armed man pass through his compartment to the next. His report led to the immediate arrest of the killer, but he was so wracked with guilt that he made a public confession of his anguish over his own role in failing to prevent the crime.

Last month, Govindachami, the one-armed rapist killer, was awarded a death sentence by a trial court judging the case. The crime ranks as one of the most brutal in recent memory, but even so, the popular bloodlust for him in Kerala has been unusual. Almost the entire state welcomed the sentence. Liberals and feminists, who generally oppose capital punishment, have either opted to keep off the debate or support the judgment. K Ajitha, who was a Naxalite in the 70s and is now president of a women’s organisation called Anweshi, said, “Generally speaking, I don’t agree with the death penalty, but in a case like that of Soumya, I don’t really mind the accused getting capital punishment. We have to see the cold blooded cruelty in this crime. She was brutally raped while half dead.”

Sonia George, a feminist activist, secretary of Sewa and state coordinator of Kerala Sthree Vedi, opted not to comment on the case, saying, “I don’t support capital punishment, but in this case, I have decided not to get into a controversy by talking against this judgment.” Mercy Alexander, director of Sakhi Wo- men’s Resource Centre in Thiruvanan- thapuram, says the element of cruelty makes her support the judgment. “It does not mean that I support the death penalty otherwise,” she adds.

The reason activists like Ajitha, Sonia and Mercy choose to sit on the fence on capital punishment in this case is that Soumya’s murder has touched a raw nerve. In a state where sexual harassment is rampant, Soumya embodied the ultimate fear—that a woman could be wantonly killed just for being a woman. Then there was the murderer himself. That he was handicapped added a bit of drama to the circumstances, but he also turned out to be a man with a police record. Investigating officers say that he was known by different names in different places. In the records of the Tamil Nadu Police, he was Charley Thomas, and had eight criminal cases against him that included robbery, attempted rape, trespassing and attempted murder.

The case itself grew increasingly bizarre as it went on. Initially, everyone thought Govindachami was a beggar, and then they heard he was a petty criminal. And when a high-profile lawyer from Mumbai, BA Aloor, turned up to defend him, a rustle went down the aisles. With two lawyers from Mumbai in tow, he made his appearance at a stage when bail for the accused was being argued over. It sent rumours swirling that Govindachami was not just a beggar but part of an underworld gang. Otherwise, who would’ve engaged such a lawyer for him? Who would pay? What was Govindachami’s Mumbai connection?

When Open contacted Aloor, the lawyer hinted that he had been hired by a group in Panvel who stood accused in a robbery case themselves. “I had appeared for them earlier in a Pune court,” he said, “They asked me to take up this case.” But there is no way to verify this. It is quite possible that Aloor saw how much resonance the case had in Kerala and decided that the publicity would be worth his time and effort. The police, on their part, did not investigate these larger conspiracies, preferring to stay focused on the rape and murder charges.

Another strange controversy followed—two forensic surgeons of Thris- sur Medical College spoke up, each claiming to have done Soumya’s autopsy oneself. The post-mortem report was submitted by the College’s head of department Dr Shirley Vasu, but an assistant professor Dr NK Unmesh said that it was he who had done it, and in Dr Vasu’s absence. The prosecution gave up Dr Unmesh as a witness, but he was then heard as a defence witness. Now he is under suspension and the court has ordered that his role be probed. Interestingly, both post-mortem reports were more or less the same, concluding that Soumya died of fatal injuries to her head and had been sexually assaulted.

Publice rage against Govindachami throughout the trial was so fervid that he was attacked by mobs more than once. It started the day the trial got underway. When he was being brought to court, a dozen or so Youth Congress activists tried to beat him up. It ended in a lathi-charge. Anticipating violence, the police did not take him to the murder scene to collect evidence, which is otherwise standard procedure.

Soumya’s case is unique in other aspects too. The legal and judicial processes were completed in record time. The police arrested Govindachami within 48 hours, the investigation was done in 90 days, and the trial in four-and-a-half months. Eyewitnesses attested that they’d seen a one-armed man walking along the track at the time.

It is hard to overstate the impact the case has had in Kerala. In newspapers and magazines, on blogs and Facebook, there have been expressions of anguish and outrage that Soumya’s fellow passengers did not respond to her cries for help. All of Kerala, especially men, seemed to bear some kind of moral responsibility for keeping the pastor from pulling the chain.

Such was the air of retribution, that when the accused was ordered put to death, the crowd in court erupted in jubilation. They distributed sweets. They hugged the police officers who’d done the investigation. They garlanded the public prosecutor.

Such glee at a death sentence dismays some. “It is dangerous to endorse the State’s power to kill,” says Dileep Raj, a campaigner against capital punishment, “Killing by the State is far more dangerous than that by an individual. And the most crucial point is that the death penalty is not punishment, but revenge.”

KR Meera, a well-known writer in Malayalam, does not support the death penalty, but welcomes the judgment. “The way the case was investigated and trial fast-tracked sets a [precedent], especially in the context of women being attacked so often. I don’t think Soumya gets justice if Govindachami is killed. A victim gets justice in its fullest sense only when the culprit gets an opportunity to repent his action.”

There are sharp faultlines in the feminism the case has stirred. Ranjini Krish- nan, a feminist and PhD scholar, does not subscribe to Meera’s line of thought. She thinks Soumya’s murder evoked such intense collective emotion because the victim herself fit perfectly into a virtuous mould of society’s own making. “The question whether you support the death penalty does not have multiple answers. It’s ‘yes’ or ‘no’. It cannot be altered from case to case. Soumya fit the conservative moral values Malayalees uphold. She was a ‘good’ girl if we go by the existing parameters of ‘goodness of a woman’.”

By that argument, the image of a girl going home for a ritual meeting with a groom picked by her family fits the mould well enough to explain the popular reaction to her murder. “She was not eloping with a boyfriend, nor was she on a picnic,” says advocate K Nandini, a Kerala High Court lawyer, suggesting that her apparent conformism explains the upsurge of sympathy for Soumya.