The Case against Fast Track Courts

Why Delhi’s experiment with speedy justice has been a disappointment 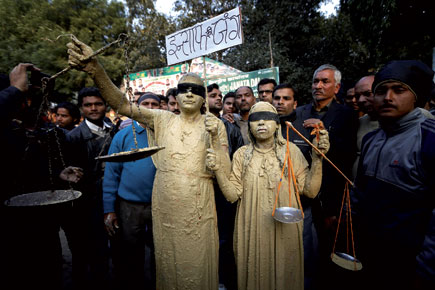 Why Delhi’s experiment with speedy justice has been a disappointment


A day after the Saket fast track court’s judgment that awarded death sentences to the four who stood trial for last December’s gang-rape in Delhi, many of the prosecutors involved in the case are refusing to speak with the media. The special public prosecutor on the case, Dayan Krishnan, declines interview requests. The directorate of Delhi’s prosecution agency, BS Joon, has had his cellphone switched off for at least two days. The only individual somewhat forthcoming is AT Ansari, another special public prosecutor. But he is brusque. “We are extremely pleased [with the judgment],” he says. “The Judiciary has shown swift judgments are possible. It has shown fast track courts can really work.”

The Delhi gang-rape trial was indeed conducted swiftly. In regular courts, rape cases usually take at least three years for a judgment, say lawyers. This one took less than nine months. Proceedings began in early February and wound up by 13 September. As many as 112 witnesses testified, including doctors—via video-conference—from Mount Elizabeth Hospital in Singapore, where the victim was flown for treatment. Hundreds of pages of evidence had to be recorded. “We did not leave any loopholes,” says Ansari, “We created a foolproof case.”

The judgment has created an upbeat mood in the country. People are impressed by the boldness of punishment as much as the quick dispensation of justice. Ansari claims that the verdict illustrates the good work being done by the six fast track courts that the Indian Judiciary set up early this year to deal with cases of sexual assault.

Yet, whether the overall cause of justice is served any better by speedy courts is far from clear. When the courts were first set up, fast-paced trials were expected to keep witnesses from being bought over and turning hostile. This, many had thought, would help raise the conviction rate. However, according to data provided by Delhi’s prosecution agency to The Wall Street Journal, the six fast track courts managed a rate of only 32 per cent till June 2013. They undertook a total of 299 trials in this period, of which 95 led to convictions. In comparison, of the 547 rape cases that Delhi’s regular courts tried and issued judgments on in 2012, as many as 204 led to convictions, a rate of 37 per cent.

Asked about this, Ansari says that in Saket’s fast track court only three of 25 cases have resulted in convictions so far. This includes the Delhi gang-rape case. Another 150 cases are still to have court hearings. “The fast track courts are not here to convict people, but to complete cases quickly,” says BS Kain, additional public prosecutor and public information officer at Delhi’s prosecution agency. “In most of these cases, the witnesses later turned hostile.”

According to Tariq Adeeb, a Supreme Court advocate who handles human rights’ cases, the belief that fast track courts will lead to more convictions is a popular but faulty notion. “People seem to presume that swifter judgments mean more convictions,” he says, “But it’s not just the court that is responsible here. The police have to do a good job of building a case. The cases themselves have to be genuine, and quite a few times they are not, and witnesses have to stick to their [testimonies] and not turn hostile.”

Another reason fast track courts were welcomed was the clog-up of cases at regular courts. Some point out that even as new courts try to lessen the backlog of sexual assault cases, they are themselves on the verge of getting overwhelmed. At the start of the year, just before the six courts were established, around 1,400 rape cases in Delhi were awaiting trial, according to Kain. They have cleared quite a few of these. But despite their efforts, so many new cases of rape came in that the figure had ballooned to over 1,600 by August. “We aren’t sure if and how long these fast track courts will be able to sustain themselves, given the number of rape cases being reported,” says Adeeb.

Fast track courts in India made their debut back in 2001. Their objective was to help clear the heavy pile-up of cases of all kind that the Judiciary was reeling under. To that end, 1,734 such speedy courts were set up across the country. Most of them, however, were wound up in 2011, when the Central Government stopped funding them. The Centre claimed that these courts were too expensive to run. The few that are still in operation depend on their respective state governments for funds.

It was the mass outrage against the 16 December 2012 gang-rape that prompted Delhi’s state government to set up the city’s six fast track courts. Two of them are located in the Tees Hazari complex (one for cases from west Delhi, the other from central and north Delhi). The other four are at Rohini (for north-west and outer Delhi), Saket (for south and south-east Delhi), Dwarka (for south-west Delhi) and Karkardooma (for central and north Delhi).

“Their establishment was nothing but a palliative gesture,” says Rebecca Mammen John, a Supreme Court lawyer, “People were upset and outraged, and the government wanted to make a show of things.”

Clearing the backlog of cases, say lawyers, is not just a matter of announcing new courts. India just does not have enough judges and this is what keeps the processes of justice so slow. The country currently has about 12 judges for every million people. In contrast, the US has over 50 per million. By the estimate of Colin Gonsalves, a senior Supreme Court lawyer and founder-director of the Human Rights Law Network, India needs at least five times as many judges as it has. “When the Government shut down many of those fast track courts, it was an admission that these don’t help clear the backlog,” he says, “Yet, [Delhi] went ahead and set up these six, in a way lying to the people that this was the solution to their woes.”

Given the shortage of judges, the setting up of these six special-focus courts poses a problem for justice overall. If the Judiciary chooses to fast track some cases (of sexual assault in this instance), this must inevitably be at the cost of slowing down others. Judges for Delhi’s six fast track courts were picked up from regular sessions courts, leaving the rest of the judges there with an increased burden of work. “There are other equally important cases—of murder, riots and thefts. What message are you sending out?” asks John, “That these cases aren’t as important?”

John is currently representing some of the accused in the 2005 Delhi Diwali Bomb Blast case, which has recently been transferred to another court. “Many people lost lives in this case. Many are languishing in jail,” she says, “I can’t understand why this case isn’t important enough to be fast tracked?” She also points out that 26 of Delhi’s 89 sessions courts have been designated as anti-corruption courts.

“After the Anna Hazare movement against corruption, the flavour of the season became corruption. Today, the flavour is rape and sexual assault. Look at the anti-corruption courts today. They have very few cases and many of them often involve petty instances of corruption. And who suffers because of this? Those involved in cases that haven’t been fast-tracked.”

On any given day, there are at least 20 cases listed for argument at a sessions court. An efficient court can accord about five of these a hearing on a good day. After one hearing, the case doesn’t come up for another 15 days or even a month. In comparison, a fast track court hears about three cases daily, and each case is sometimes heard on a daily basis.

According to some lawyers, the quality of judgments issued by fast track courts is questionable. Gonzalves, for example, says these courts are “not a satisfactory system for delivering justice”. He explains: “These courts are given unrealistic targets of cases to finish. They are told not to get involved in too much technicality. But that’s not how the criminal justice system works. It requires care and attention.”

One specific case that has been discussed in legal circles is the first that Dwarka’s fast track court judged in January this year. The accused, a farmhouse guard, was held guilty of the rape and murder of a three-year-old girl in 2011. The trial was completed within 10 days and the accused handed a death sentence. “The accused, in all probability, was guilty and the correct sentence was handed out,” says Adeeb, “But I can’t understand how a rape trial can take only 10 days. How can one hear both sides, examine the evidence and issue a judgment within that timeframe?”

While it is too early to judge the judgments of Delhi’s fast track courts on the whole, lawyers argue that in other states, a notably large fraction of the decisions of fast track courts have been overturned by higher courts on appeal. “I have heard of seven and eight day trials in Rajasthan’s fast track courts,” says John, “These decisions are celebrated as though it’s a great achievement. A few years or months later, when appealed in a higher court, these decisions get overturned. Why? Because they have been conducted in haste, without proper examination of evidence.”

Appallingly, statistics now appear to be guiding a process that is supposed to be dedicated only to the truth. “There is tremendous pressure these days from people and the media,” observes Gonzalves, “I have heard many retired judges tell current ones undergoing training to increase their conviction records. This is a terrifying suggestion. What about that salient feature which says a person is to be convicted if and only when his guilt is proven beyond reasonable doubt?”

That is a question ignored by those baying for instant justice without an informed appreciation of the due process of law, a process that must ensure that an innocent person is not wrongly punished. “I am sure the correct judgment was made in the Delhi gang-rape case,” says Gonzalves, “After all, there was so much attention on it. But we still need to be careful that these fast track courts don’t serve fast track injustice.”