The party of the downtrodden is fielding candidates rolling in wealth. Just what’s the election plan? 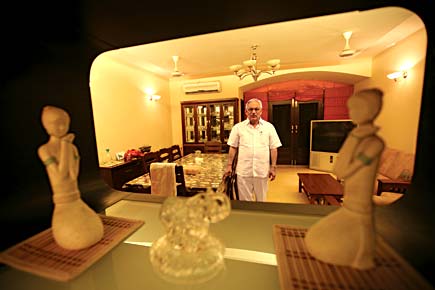 The party of the downtrodden is fielding candidates rolling in wealth. Just what’s the election plan?


WHEN Deepak Bhardwaj stands on the terrace of his house in Nitesh Kunj near the Delhi-Gurgaon border off NH 8, he is the king of all he surveys. “All the trees, all the land you can see from here, is mine,” he says. The tone, though, is not one of flaunting wealth; it is that of achievement, of social mobility. Bhardwaj was born in rural Sonepat, Haryana, in 1950. His family had a few acres of land. After graduating in commerce from Delhi University’s School of Correspondence, he became a stenographer with the Delhi government’s sales tax office. Seven years later, he knew he was meant for higher things. He started a business of automobile parts.
“And I did real estate on the side,” he says. Real estate as in property brokerage? “No, no. I was into acquiring agricultural land for industrial houses and for farmhouses. I was good at this because of my own rural background. So I shut down the automobile business in 1979 and started doing real estate full-time.” There was no looking back. The former stenographer today runs schools, erects buildings and creates townships (his first is coming up near Haridwar). He recently earned big money when Delhi airport acquired some of his land. Bhardwaj re-invested it in other tracts that he expects to be urbanised soon.
Real estate, he says, is the surest way of getting rich. Indeed, Deepak Bhardwaj is the richest Lok Sabha candidate this year; his and his wife’s declared assets are Rs 603 crore. “It’s a non-issue,” he says, “I had to declare what I had in my books.” When he filed his nomination on 16 April for the West Delhi seat, he caused a furore. The media had one big question—isn’t there a contradiction between fighting from the Bahujan Samaj Party (BSP) and being filthy rich? It’s a ridiculous question, he says, but is happy that people are asking it. “It’s helped us differentiate him from other candidates,” says his publicity manager, “Now everyone knows his name.” Newspapers big and small have asked his campaign for paid news reports. The papers have also been digging out his other connections, such as the marriage of Bhardwaj’s younger son, Nitesh, to Shah Rukh Khan’s sister-in-law.
Until Bhardwaj filed his affidavit, the richest candidate in Delhi was Kanwar Singh Tanwar, with assets of Rs 155 crore. Tanwar, a Gurjar born in Fatehpur village in the outer Delhi area of Chhatarpur, now has a mansion there.
The similarities between Tanwar and Bhardwaj are uncanny. Both have hotels coming up behind their houses, both made it big in real estate, both are sons of modest farmers, and both have joined the BSP recently. Both chose the BSP, as they say openly, because it would have taken years to get a ticket from any other party.
Tanwar shut down his milk processing unit and started a transport business that had a stroke of luck in the 1982 Asiad construction boom. Now, his four foreign-educated sons run the business. “I am not entering politics to make money, I have enough of it,” are his typical words at the campaign. A trust run in his mother’s name operates a hospital and a widow pension scheme.
There are differences between the two, of course. Bhardwaj’s house, for example, combines affluence with a sense of Brahmin austerity, and he’s proud of having been president of the Delhi Arya Samaj Sabha. “I am the same man, I haven’t changed all these years,” he insists, “I believe in saadgi, in simplicity.” Tanwar, on the other hand, loves to drive his Audi Q7, which, by the way, is not among the cars declared in his affidavit. He shows us around his house. The 12 rooms try to look desperately minimalist and not-Punjabi baroque. And yet, you have a bar popping out from the centre of a side table at the press of a remote button, the expensive alcohol not even opened. Then there’s the silver-coloured Hanuman paraphernalia, and he’s especially proud of the jacuzzi and shower enclosure that sprays water from eight nozzles. Every wall in the house has abstract paintings on it, but he has no idea where it’s from or who made it. “Supplier hain hamaray,” he says, “badey badey.” (We have big suppliers.)

Money, they have made. Fame is what they expect politics to deliver. Or is this being too judgmental? “We have very anachronistic expectations of politicians of lower-caste backgrounds,” says sociologist Satish Deshpande, “We don’t ask the same questions of people like Vijay Mallya, who became a Rajya Sabha MP. The upper-caste, middle-class mind is uneasy at the thought of lower-class individuals acquiring money and power,” he says. “These new entrants are distinct from the professional politicians who have fixer-like political skills,” Deshpande adds, “They want to buy their way through.”
Tanwar’s constituency, the redrawn South Delhi, is composed largely of semi-rural ‘outer Delhi’ areas, but includes the middle-class localities of Saket, Vasant Kunj and Kalkaji as well. Addressing a group of retired men in a Saket house, he is asked by the Bhatias and Chandras: why BSP? Look at me, he says, not the party. Besides, the BSP comes with a vote bank of poor Dalits. In Dalit bastis, he would reverse the message—a vote for him is a vote for Mayawati as prime minister. Although the seat is a Congress stronghold, dominated by Jats, it got the BSP a whopping 25 per cent vote share in the Delhi Assembly polls, even if Tanwar himself came in third. “That was because there were other Gurjars contesting,” he says. In that case, won’t the BJP’s Ramesh Bidhuri divide his Gurjar votes? “No, because his gotra has only two villages. Mine has seven,” he says, making a claim to caste catchment. Local observers see Tanwar as ahead of Bidhuri, but his Gurjar-plus-Dalit combination may not be able to beat the Congress’ Jat-plus-Muslim formula.
Bhardwaj, meanwhile, does not have such equations to bank on in West Delhi, so he is talking of netting rural votes. “Everyone in the villages feels a fellow dehati should be given a chance.”

The BSP has other rich contestants too. Rakesh Hans, its candidate from Delhi’s only constituency reserved for Dalits, is worth Rs 50 lakh. One reason why the party attracts such wealthy wannabe parliamentarians could be that it actually auctions the tickets, as the rumour goes, once the constituency calculations are done and the ‘right caste’ identified. This may also explain why so many candidates are recent sign-ups to the party.
Delhi Assembly elections in 2008 saw the BSP’s vote share rise dramatically to 14 per cent, up from 2.5 per cent previously, throwing the arithmetic of the BJP and Congress into disarray in several seats. “Although my family has a Congress background, I felt the BSP was a party of the future,” says Tanwar. The sentiment is echoed by Bhardwaj, who justifies the party’s modus operandi thus, “The BSP believes in taking all castes together with equality. And not believing in caste hierarchy is also what the Arya Samaj philosophy is about.” While Tanwar has a freak chance, Bhardwaj does not even have that, but both claim to be ready for the long haul.
The BSP’s national treasurer, Ambeth Rajan, is all too glad to have billionaires in the party. “The BSP looks after the interests of the poor, but is not a party only of the poor,” he says.
This is typical of the BSP’s electoral strategy. It is fighting 500-odd seats across India, leaving out the other 45 only because “our units there are not ready”, as Rajan puts it. In the 2004 Lok Sabha election, BSP had fielded 435 candidates, of which 358 lost their deposit. Does it really have a hope in any seat beyond Uttar Pradesh (UP)? “The 15th Lok Sabha will not last its full term,” responds Rajan, “and by the 16th Lok Sabha, a lot of our rising vote share will start translating into seats. That’s when Mayawati will become PM.”
To consolidate the pan-India Dalit vote, the party seems to be deploying a strategy modelled on its successful one in UP. In its first phase, it used its Dalit support to play an agent of destabilisation. Once it was acknowledged as a force, it went into expansion mode, forming new caste alliances, wooing other voters with ‘brotherhood committees’ aimed at weakening caste barriers. “These days caste associations are themselves coming to us,” says Rajan, “They want equal representation.”
The party’s aim this year is to double its national vote share from 5.3 to over 10 per cent. “The prime minster issue has been over-hyped by the media,” he insists. The strategy is reflected in the party’s choice of election symbol, the elephant. Slow and steady. It has been said about the BSP that it contests the first election to lose, the second to defeat and the third to win. “Exactly,” says Rajan, “and we are in the second stage. You will this time see a few seats outside UP too.” For all their money, Tanwar and Bhardwaj, are happy to be hauled along by the pachyderm—so long as they get what they want. Which depends on what Mayawati and her strategists want.