With the aid of Modi’s story of his days as a tea vendor, the state party unit has been wooing the chaiwallahs of South Mumbai in earnest 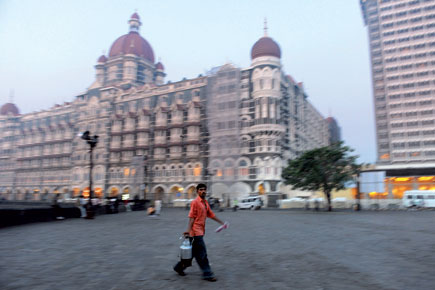 With the aid of Modi’s story of his days as a tea vendor, the state party unit has been wooing the chaiwallahs of South Mumbai in earnest

Roadside chai has never held much importance for most of the state’s BJP leaders. With the threat of diabetes, many have stopped drinking tea at roadside stalls because sugarless tea is rarely on offer here. Moreover, there is a tea hierarchy: at the BJP’s state headquarters in South Mumbai, not everyone is offered a cup of tea. The offering of tea is an indicator of the visitor’s, particularly if s/he is from the media, standing with the party’s leaders.

But from the time that information about the party’s prime ministerial candidate and Gujarat Chief Minister Narendra Modi’s days as a tea seller came to be known, BJP leaders have given roadside chai shops ‘high priority’ on their itinerary. It was a shock to tea sellers in South Mumbai when they were handed invitations to Modi’s 22 December Mahagarajna rally at the Bandra Kurla grounds. The party claimed that 10,000 tea vendors had been given VIP passes.

Interestingly, they are not from across the state or even Mumbai; they are all from South Mumbai, from where former MLA Raj Purohit is planning to revive a sagging political career.

Party sources pointed out that it was difficult to ‘accommodate’ even the ones who turned up in the VIP enclosure as there was a shortage of chairs. BJP workers, who went around giving out the invites, cannot remember the name of a single chaiwallah they met. “We… gave invitations to all the chaiwallahs we saw. We do not know their names, or if they are voters. But we know that after the invitations, they have become BJP supporters,” says Sanjeev Patel, who was part of Purohit’s ‘chai vyavastha’ team. The grassroots party worker has been assigned the task of converting every chaiwallah in his/her locality into a BJP supporter.

Jumping onto the chai bandwagaon, a female BJP worker has set up a NaMo tea stall in Malad in suburban Mumbai to “salute the chaiwallah”. This extra sweet tea is available in extra small cups for a rupee. Mumbai is a city of tea drinkers, who like it milky and extra sweet. In all likelihood, this NaMo tea stall will be emulated across the city.

Until Modi was anointed its PM candidate, the BJP in Maharashtra did not have much to talk about. A group of dispirited leaders tried to revive the electoral fortunes of the party from the long shadow of the Shiv Sena, its alliance partner of two decades. Caste politics, one-upmanship and groupism among BJP state leaders have taken a toll on the party in the state. The Modi factor has revived the Vajpayee faction; however, those in the Advani camp have maintained a distance from the revival plans.

Other parties have tried to claim autowallahs and taxiwallahs as supporters—having found leaders who have driven both. It has, thus, become important for the BJP to hold on to its chaiwallahs. Traditionally, tea vendors have never been BJP voters. Most of South Mumbai’s tea stalls are run by migrants from the Konkan belt, and they owe their allegiance to the Shiv Sena. Local Sainiks are not happy with the BJP’s ‘chai vyavastha’ programme. It is unlikely that the BJP will find political converts in this constituency because local Shiv Sena shakhas (branches) are more active, and by implication, of more help, than the BJP one.

Another group the BJP is keen to woo is that of mobile tea vendors, who work from 9 pm to dawn. This group, known as Anna chaiwallahs, is of migrants from Tamil Nadu staying in slums across the city. They sell tea from steel containers mounted on cycles, and move around the city through the night. Traditionally, they are Congress voters.

Maharashtra’s political arena is not without its stories of leaders with aam aadmi backgrounds. Union Minister for Agriculture and NCP chief Sharad Pawar, who is a wealthy man, makes constant reference to his origins as a farmer. He has recently been facing flak for the increasing prices of agricultural produce. Chhagan Bhujbal, formerly a Shiv Sainik and an NCP heavyweight at present, says he was a vegetable vendor at the Byculla market in central Mumbai. He now owns educational institutions in Mumbai and Nasik. Few can remember his vegetable selling days.

Evidently, Modi’s reference to his tea-selling days has found resonance across the political sphere. Leaders, big and small across the political divide, are reworking their CVs to highlight their humble beginnings. Besides, 2014’s General Election has only quickened the need to ‘get’ backgrounds in sync with the aam aadmi.