The Ballad of Gangu Teli

There’s more to Raja Bhoj, and even Gandhi, if we look at them from a Dalit perspective. 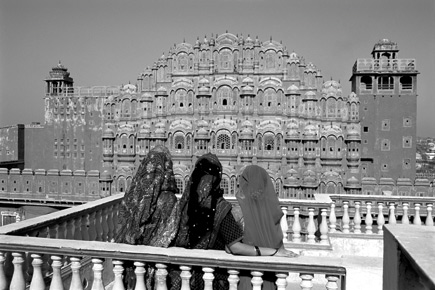 There’s more to Raja Bhoj, and even Gandhi, if we look at them from a Dalit perspective.


On the last day of the fifth edition of the Jaipur Literature Festival (JLF, 21–25 January), I decided to get away from the choking Diggi Palace, and just roam the streets of the old walled city. After briefly reflecting over the correctness of being ridden around on a cycle rickshaw, I took one anyway. Soon, Raju the rickshaw guy and I got chatting. He told me rickshaw-wallahs in Jaipur are called pilots. Raju the Pilot suggested I see the famed Hawa Mahal. I didn’t like this idea either, but succumbed since I had three hours to kill before the post-lunch Punjabi Dalit session: ‘A Million Suns’.

On reaching Hawa Mahal, I suggested to Raju that he join me. He quickly agreed, and later told me, after living 30 years in Jaipur he had never been inside Hawa Mahal. To me, it seemed like a prison for Rajput women, and the audio commentary by ‘narrowcasters’ reinforced this perception. Raju agreed and claimed that the kings here basically got any woman they fancied and sexually abused her. He called the king a raand-baaz—sex addict—and we both laughed.

Jaipur prides itself on being India’s first planned city. Sawai Jai Singh II (1688–1743), the Rajput king whose name the city was forced to adopt as its own, commissioned Vidyadhar Bhattacharya, a Bengali town planner, who framed the city in a mandala-like grid with all streets in the old city meeting at right angles. No curves. The Hawa Mahal perhaps was the acme of such social construction. This was where the Rajput royalty kept their women secluded from the gaze of the world. Leading their entire lives in this harem-prison, they could look at the world outside through the latticed windows, some of them adorned by coloured glass that refracted light in beautiful patterns. These were the little pleasures of a veiled existence. The world outside could not see them. Built like a honeycomb, the five-storeyed pyramid-like building can be entered only from the rear.

On heading back to the JLF venue, Punjabi poet and writer Nirupama Dutt began the session on Punjabi Dalit Literature with Iqbal Singh, daughter of the late Sant Ram Udasi, singing some of the songs of the revolutionary Punjabi poet. Nirupama first summarised the songs Iqbal Udasi was to sing. She began with A Million Suns. Like in the rest of India, in Punjab, Dalit quarters are located to the west of the village so that the sun rising from the east lights up the Dalit ghettos only after it touches the caste Hindu localities. Sant Ram’s song hopes for a million suns that will render the east-west divisions redundant.

Iqbal then sang the Ballad of Gangu Teli (Gangu the Oilpresser). ‘Kahaan Raja Bhoj aur kahaan Gangu Teli’—so they say in the cow- and wheat-belts. There’s even a film song in the Govinda-starrer Dulhe Raja (1998) that goes: ‘Chachundar ke sar pe na bhaye chameli/ Kahaan Raja Bhoj aur kahaan Gangu Teli’ (A string of jasmine ain’t no good on a rodent/ Bhoj shall always be king, Gangu Teli redundant). Bhoj was an eleventh-century ruler of the Malwa region, credited with having been a patron of intellectuals and artists, and founder of the city of Bhopal. Among other things, Bhoj got his engineers to build the majestic Panhala Fort, off Kolhapur, in today’s Maharashtra. The fort houses a small tomb in an insignificant corner for the wife of Gangu Teli. Official history has it that when Bhoj encountered a problem with the building of the fort, a pandit suggested a panacea, a double human sacrifice—mother and newborn child. Apparently Gangu Teli, an oil vendor, ‘volunteered’ to sacrifice his wife Jakkubai and their newborn. Hence a tomb for Gangu’s wife.

These are stories murderous kings make up about the poor’s implied willingness to give up their lives. As with Eklavya, so with Gangu Teli and his wife—who seemed to have even less say in the matter—and their newborn child. A rebel is memorialised as a self-sacrificing supplicant. Brutal murders and exercises in feudal power are portrayed as willing submissions to ideology. Poet Sant Ram Udasi thus sang of the Kingdom of Gangu Teli; for him Gangu was the hero, not Raja Bhoj. The morning’s visit to Hawa Mahal and the fact that Diggi Palace—an 1860s citadel of Thakurs and venue of the JLF—had made some space for the Gangu telis (Dalit writers) brought a little smile to my face. Not that Gangus were now storming the palace; they were just happy to be there and show their finger to the king.

This brings me to the point of showcasing Dalit writing the at the JLF. What purpose does it serve? Does it give the illusion of inclusion and diversity in a liberal setting? Is corporate sponsorship more inclusive than Raja Bhoj was? Or does it facilitate the viewing of Dalit literature as yet another commodity in the corporatised book market? Should the Gangu telis be happy that they are dining in Diggi Palace? What about violent ideas of tearing down the palaces?

Reflecting on the forms that dissent and protest can take, P Sivakami, Tamil author of the novel Pazhaiana Kazhithalum (translated as The Grip of Change), said in a recent interview to Tehelka, “Raj Gowthaman, a Tamil Dalit writer, wrote a story about a grieved worker who is angry with the customer in a canteen spitting in the coffee and serving it to him. This is silly! If you have a problem with the person, if you have the guts, you must encounter him directly.” At the JLF, Dalit writers made their point directly, and with dignity.

If legend claims that Gangu was forced to sacrifice his wife and child and Eklavya his thumb, in reality the Gangus have claimed their pound of flesh. In another session, Marathi writer Laxman Gaikwad, author of Uchalya: The Branded, narrated a delightful story entitled Gandhi’s Goat. Some ten years ago, Gaikwad was invited to Ahmedabad to honour Ramsingh, a hero of the criminalised Charra tribe. Even today, Charras, a ‘denotified tribe’ or DNT, are treated as ‘born criminals’ and face severe harassment from the police and civil society. Gaikwad informs his audience that the most favoured modern career among Charras is as lawyers. There are more than 200 lawyers servicing Charranagar, off Sabarmati, in Ahmedabad. This is considered the best profession a Charra can choose to support his community members who have to constantly appear in courts. The police foist endless cases on them, habitually invoking independent India’s Habitual Offenders Act (that replaced the colonial Criminal Tribes Act of 1871). Many Charras also land in trouble for brewing country liquor in a state where alcohol is prohibited.

Gaikwad, after garlanding Ramsingh and draping a shawl over him, wanted to know why he was honouring Ramsingh, who was no lawyer. A piece of history was to be revealed to Gaikwad.

The story dates back to the time when Mohandas Gandhi used to hover around the Sabarmati Ashram. At some distance from the ashram was a Charra settlement. During his walks, Gandhi spotted a band of Charra boys and invited them to the ashram so that they’d gain some education and guidance. Ramsingh emerged as the leader of these boys with whom Gandhi used to personally interact. The Charra boys were fascinated by the gaunt, under-clad man who walked in long strides. They did not understand ‘freedom struggle’ or ‘nationalism’, for these had little meaning to their lives. In awe of the budhdha (old man), as they called Gandhi, they would observe everything he did. They noticed that he had a favourite goat that he used to feed cashews, almonds, pistachios and other dry fruits. The undernourished Charra children envied the lucky goat, lamenting their own fate.

Once there was a famine and the Charra community was the worst hit. For days they went without basic food. Around this time Gandhi was not in his ashram, busy as he was rousing the Swadeshi spirit in various parts of India—everywhere but in Charranagar. After ten days of going hungry, Ramsingh and his friends decided there was one meal they could definitely have. They approached the old man’s goat nourished on a diet of dry fruits, pierced its tongue with the thorn of the babool tree so that it would not bleat, and stole it away to Charranagar. It was a feast amidst the famine. At last, Gandhi’s goat had had some use.

Ramsingh, the man Gaikwad was honouring in Sabarmati, was therefore a Charra hero: he had offered them freedom from hunger. Gaikwad says freedom continues to have no meaning for a community that is viewed as criminal by birth.

Over mutton curry and beer that night in Diggi Palace, Gaikwad and some of the Dalit writers concluded that even today many goats lead more fortunate lives.

THE ROAD TO, BY, DSC

When Nigerian author and Nobel laureate Wole Soyinka, known for his play The Road, reflected on the road he had taken from Delhi to Jaipur, little would he have known that the road was built by the principal sponsor of the ‘DSC’ Jaipur Literature Festival. Most participating writers and speakers cared little for the financial muscle of DSC—Darshan Singh Corp Ltd, which claims to be creating ‘infrawealth’ for the nation in the shape of roads, railways, urban infrastructure and hydro-power. And now literature. These are the new Raja Bhojs. They are not averse to humouring the Gangu Telis and Ramsinghs. We can laugh a little, but we can also cry.

S Anand is the publisher of Navayana. To the charge of abetment in putting together the Dalit focus at the fifth Jaipur Literature Festival, he pleads guilty.