‘The Arms Lobby Is Very Strong’

General VK Singh has perhaps been India’s most controversial Army chief since Independence. Excerpts from an interview with him 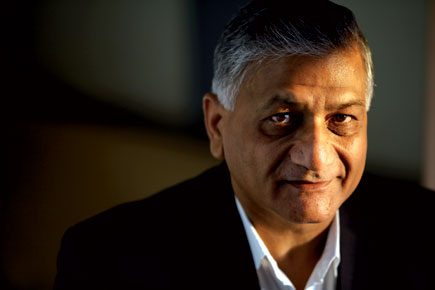 General VK Singh has perhaps been India’s most controversial Army chief since Independence. Excerpts from an interview with him


General VK Singh has perhaps been India’s most controversial Army chief since Independence. For a year’s extension in office, he took the Government to court over a dispute on his age. Since his retirement in May 2012, he has been politically active. He has taken part in political rallies, protests and dharnas, and even made public statements on an issue that conventional wisdom would consider a State secret. His autobiography, titled Courage and Conviction, has just been published. “Shoot!” he commands. “Shooting is your job, I just have some questions,” Mihir Srivastava of Open tells him. He laughs. They are seated in Room No 83 of the Annexe of India International Centre in New Delhi. Excerpts from an interview:

Q Why are you so motivated to tell your story?

A David [Davidar of Aleph] motivated me. There are two things I tell of in this book. My DNA: the way my schools shaped me, made me what I am: absolutely forthright. Secondly, I have seen so much in my lifetime and reached a particular position. It will help youngsters learn suitable lessons.

Q Autobiographies are usually a retrospective justification of one’s actions. It is like arguing one’s case without the fear of being told to shut up.

A (Laughs) See, I don’t want to lead a simple predictable retired life. I felt that I still have a job to do as a citizen of this country. I want to reclaim India. I strongly feel that we need some changes urgently to function as a nation if we are to prosper. The prevalent situation will only sink us deeper.

Q This book will make people in the Government and Army unhappy with you. You present a grim picture of how the defence establishment functions.

A That is a reality.

Q How strong is the arms lobby? Do they remote control the Defence Ministry?

A The arms lobby is very strong. I can give you many examples. Do you remember that the Rafale file [the Eurofighter that India is likely to buy from a European consortium in a deal worth $12 billion] was found lying in some colony somewhere in Delhi? It is a top secret document. Government [information] percolates. [Arms dealers] know where a particular file is, who is handling it, what are the notings made on it. They would know when the files reached my office. They know everything.

Q According to your book, you didn’t want an extension. Yet, you took the Government to court—the first time by a serving Army chief—to get your age reduced by a year so you could continue in office for a year more.

A For 36 years, all my documents said that I was born in 1951. I made a mistake when I was fifteen-and-a-half years old while entering my age in a form. It was sorted out. The NDA, UPSC cleared it. This issue was raised to attack me.

Q Why were you so inconvenient to the Government that it was so eager to get rid of you?

A In the Tetra deal [involving irregularities in the Army’s purchase of these all-terrain vehicles from Bharat Earth Movers Ltd], a lot of money was made. Sukhna [the scam] had shaken us to the core. I was for a full investigation and transparency.

Q You made many enemies in the Defence Ministry.

A I took measures that created a phobia in people. The system was suffering. I pointed it out…

Q It seems to me that you had some reasons for orchestrating a coup, as was reported by The Indian Express.

A (laughs) The report said I moved two units of the Army without permission towards the capital. It was actually a routine movement. And why would I need to move two units [for a coup] when there is already a big Army presence in the capital? Can you [conduct a] coup with just 1,000 men in a country like India?

Q How did you react to the article?

A To be frank, I laughed. (laughs) The headlines were so bold—as if a holocaust had happened. I had met Shekhar Gupta [editor- in-chief of the newspaper] for lunch before the story was published. He invited me to his Walk the Talk show with him. I didn’t say anything. His office called to confirm, I told them that I’d never promised. The [Indian Express] story was meant to discredit me and create an alarm.

Q Who was the source of this story? Was it someone within the Government or Army? It was a fairly detailed story.

Q If I as PM had read this article, I would have called you and sought an explanation. Did you get any call from the Government after this story?

A No, not at all. No one called. The Defence Minister [AK Antony] was clarifying to the media that there is no truth in it.

Q Given the grim state of affairs you have highlighted in your book, did the idea of a coup ever cross your mind?

A The Indian Army is far too [well] wedded to the Constitution of the land and to democracy. The Army does not think of a coup. [It] thinks of how best to defend the nation, to serve the nation.

Q You are controversial because you spilt State secrets that embarrassed the Union. You said the Army paid money out of its secret funds to J&K ministers.

Q Six of your predecessors, Army chiefs since 1990s, have denied your claim.

Q Do you still stand by your statement?

A Yes I do. There is no going back on it.

Q Do you have political ambitions?

A I have not joined any political party. I could have joined any [of them], including the Congress, after I retired. Large segments of rural [India] have to develop. I have attended many farmer rallies. I want to highlight issues that I feel strongly about. I am for Gram Swaraj. There is a desperate need for change, village schools, health. Development has to go to the villages.

Q You have been weighing your options, aren’t you? You were seen with Arvind Kejriwal and then with Narendra Modi. Your appeal rests in the embarrassment you have caused the UPA.

A You need good people in the political system.

Q Are you going to contest elections?

A I haven’t decided so far. I am giving myself time. Let’s see. If people persuade me to contest election…

Q So you are open to persuasion?

A I will take a call at that time. If you look at the constitutions of various parties, there is not much to choose from. They are all so good on paper. What needs to be seen is how much translates into action.

Corrigendum: It is true that Shekhar Gupta, editor-in-chief of The Indian Express, did not apologise to General VK Singh, nor did Singh issue a notice against Shekhar Gupta as he is quoted as saying in the Open interview titled ‘The Arms Lobby Is Very Strong’. The error is regretted. —Editor