Traces of Hemraj’s blood were found on a pillow belonging to Krishna, Dr Rajesh Talwar’s compounder who lived nearby. Yet, the CBI chose to ignore this 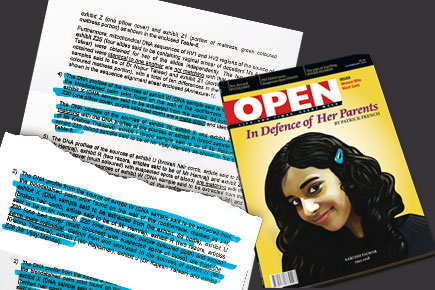 Traces of Hemraj’s blood were found on a pillow belonging to Krishna, Dr Rajesh Talwar’s compounder. Yet, the CBI chose to ignore this


Documents obtained from court records on 17 February by the Talwars’ lawyers shed new light on the Aarushi case and raise fresh questions about how the investigations have been conducted. The new evidence clearly points to a different interpretation of the case than the one being pursued by the CBI. These documents, part of the  CBI’s annexures in its closure report, suggest that it was their domestic help Hemraj’s blood that was found in the palm print on the terrace wall of the Talwars’ residence, the bloodstained Ballantine’s Scotch bottle on the Talwars’ dining table, and most tellingly, on Hemraj’s acquaintance Krishna Thadarai’s purple pillow cover. In its closure report, the CBI had omitted this last fact: the presence of Hemraj’s blood on Krishna’s pillow.

The story of how this evidence was obtained and then ignored by the CBI typifies the case. It was about a month after Aarushi, the teenage daughter of dentist couple Rajesh and Nupur, and their domestic help Hemraj had been found murdered at their Noida residence. The Central Bureau of Investigation (CBI) had by then taken over the investigation and Rajesh had been arrested by the Noida police for the double murder. A four-member CBI team, accompanied by experts from the Central Forsensic Science Laboratory (CFSL), arrived at the residence of Krishna, Rajesh’s compounder. Krishna lived with his brother-in-law’s family at the servant quarters of L-14, Sector 28, in Noida. During that inspection, which was on the morning of 14 June 2008, the CBI team took possession of seven of Krishna’s trousers, a khukri (curved knife) along with a sheath, and a purple-coloured pillow cover used by him. The investigating team in their ‘inspection-cum-seizure’ memo filed that day recorded that ‘some spots have been found on a pillow cover and clothes of Krishna which are suspicious and require to be examined (sic) by experts in the lab’.

However, the closure report submitted by the CBI to the Ghaziabad CBI Court on 29 December 2010 had ruled out any possible role of Krishna (along with that of two other suspects Raj Kumar and Vijay Mandal) in the murders. CBI attributed its initial suspicion of Krishna to revenge—he had been scolded by Rajesh at the clinic—and, (to quote from the closure report), ‘Krishna and Raj Kumar were Nepalis known to Hemraj and had access to the home of Dr Rajesh Talwar.’
The CBI in its closure report, however, went on to absolve all three suspects stating that following intensive investigation, ‘it was conclusively established that the servants could not have committed the crime.’

At this point, it is useful to return to the CBI’s investigation of Krishna in 2008. The CFSL in its report submitted two weeks later (30 June 2008) confirmed the presence of blood on the pillow cover.

So whose blood was it?

The Centre for DNA Fingerprinting and Diagnostics (CDFD), the Hyderabad-based lab, was tasked by the CBI then to identify and the match DNA samples collected from the crime scene with those collected from the suspects (including Rajesh and Nupur). Krishna’s purple pillow cover was among the items sent.
The CDFD report (6 November) confirmed that the DNA profiles extracted from the bloodstained palm print on the terrace wall of the Talwars’ residence, the bloodstained Ballantine’s Scotch bottle that was found on the dining table of the Talwars on the morning that Aarushi was found dead, and the blood on Krishna’s purple pillow cover were identical.

The report further matched the DNA profile from the blood extracted from the purple pillow cover with that extracted from personal items—a broken comb, two razors—that belonged to Hemraj.

Quoting from the same CDFD report, ‘Conclusion’, Page 6/7,   Item 2, ‘The DNA profile from the source of exhibit W (DNA sample said to be extracted from the bloodstained palm print found on the wall of the roof/terrace, marked as 24) exhibit X (DNA sample said to extracted from the exhibit: 6d bottle), exhibit U (broken hair comb, article said to be of Mr Hemraj), exhibit R (two razors, articles said to be of Mr Hemraj), Z20 (one pillow cover, purple- coloured cloth) and exhibit Z30 (one bed cover (multi-coloured) with suspected spots of blood) are from the same male individual, distinct from and unrelated to the sources of exhibit H (Mr Krishna Thadarai), exhibit I (Mr Rajkumar), exhibit J (Dr Rajesh Talwar) and exhibit Z26 (Vijay Mandal).’

“The entire story of the CBI that there was no external entry collapses with this evidence. How does Krishna explain the presence of Hemraj’s blood on his pillow? This completely changes the complexion of the case,” says Rebecca John, the Talwars’ lawyer.

Responding to this new piece of forensic evidence, a CBI spokesperson, speaking to a national daily (‘CBI ignored Krishna’s fingerprints’, The Times of India, 1 March)  said: “Their claim is wrong. No such DNA fingerprints were found on Krishna’s pillow or terrace which were of the same person.”

In the same media report, the CBI spokesperson also questioned why the Talwars had not made this claim earlier.

Funny that the CBI should say that. This evidence comes from the CBI’s own documents which it submitted as part of annexures to the closure report submitted to the Ghaziabad court. As the CBI resisted sharing the annexures with Talwars’ lawyers,  the documents became available to them only after the court provided them certified copies on 17 February.

The closure report states, and perhaps earnestly, that the ‘DNA of none of the servants was found on any of the exhibits collected from the crime scene.’ But then, what about the more likely scenario of finding the DNA of one of victims on one of the suspects?

“The CBI seems to have been more concerned with finding a DNA profile extracted from the crime scene that matched one of the suspects. They didn’t ask the reverse question and so they haven’t looked for the answer. This new evidence points to the involvement of Krishna in the crime. And this explodes the CBI’s theory that no outsider was involved in the murders,” says John.

Krishna’s lawyer, FC Sharma, declined to comment on this development. “I have not seen the affidavit and, therefore, cannot comment.”

At the Allahabad High Court on 1 March, a day after the Talwars filed their revision petition against the Ghaziabad Court’s order that charged them with murder and where their counsel Gopal Chaturvedi pointed to this new piece of forensic evidence, the CBI pleaded that the special court had rightly summoned Rajesh and Nupur Talwar in the case.