An MLA in Andhra Pradesh built a temple in the honour of Sonia Gandhi for granting statehood to Telangana, a demand pending for over six decades. 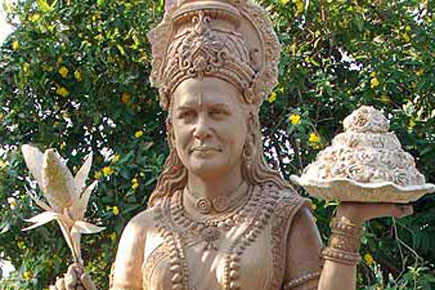 An MLA in Andhra Pradesh built a temple in the honour of Sonia Gandhi for granting statehood to Telangana, a demand pending for over six decades.

How does an average south Indian proclaim his extreme affection for the public figures he admires? Simple. He builds a temple.

The 67th birthday of Sonia Gandhi last December made her join the rare league of politicians and film stars – the list being led by her illustrious mother-in-law, Indira Gandhi, who stands head and shoulders above everyone else – in whose honour temples have been constructed in the hinterland of the country, across the Vindhyas.

Call it extreme deification or obsessive symbiosis, the southerners of the country have been like this only. In this case, P Shanker Rao, 66, an MLA from a reserved constituency (Secunderabad Cantonment) and the ex-Textiles Minister of Kiran Kumar Reddy government in Andhra Pradesh had a cast iron alibi: ‘repaying the gratitude’ to Sonia Amma for pulling off the impossible – granting statehood to Telangana, a demand pending for over six decades.

The temple, to be built on a 9-acre plot at Nandigama, Mahabubnagar district, around 100 km from the state capital is strategically located on the Hyderabad-Bangalore highway. No wonder, the maverick medical doctor (1971 batch) who owns the property sees enough potential for his ‘Sonia Gandhi Shanti Vanam’. It is poised to be a tourist attraction, on the lines of Rajiv Gandhi Memorial, built at Sriperambudur on the Chennai-Bangalore highway. The bronze statue, which sycophants pout resembles the Telangana Talli (mother) is around 9 feet tall and is around 500 kg in weight.

Considered a gadfly and an unpredictable politician by the local Congress party unit, Shanker Rao loves creating controversies and worse, getting rattled by the media sniper fire. Over the past seven months, he has been cannon fodder for Telugu dailies and the two-dozen plus Telugu news channels who have been playing up his antics non-stop. His raves and rants have been parodied endlessly by sundry anchors in local channels.

The latest in the list begins with the much-repeated telecast of him getting into a scrap with the cops and his dhoti getting untangled at the hip in the melee. Then there is the contrived expression of piety on his face as he visited the neighbouring region of Vijayawada in the first week of January to oversee the progress of his pet temple project. Added to this embarrassing show of genuflection was the blabbering and self-congratulatory tone of his on the entire event, approvingly endorsed by his family members.

On the temple issue, Shanker Rao definitely has competition. Stealing a clear march over his fellow party leader, the MP of Karimnagar constituency, Ponnam Prabhakar had already constructed a make-shift temple in his constituency in October 2013. They call it a ‘Pavithra Mandiram’ with regular puja, replete with incense sticks and coconut-breaking.

As the ever loyal MP proclaims the permanent structure would be ready once the Telangana state is formed. This, of course is more of a desperate political gimmick on behalf of the Telangana Congress party men who want to be relevant as the elections are announced in the next two months.

The temple story, generically speaking, has very interesting sidelights. Political pundits say that the enraged Congressmen resorted to such frenzied counter-activity after they saw rival Telugu Desam party men raise in a tomb in Sonia Gandhi’s name at Tirupati, in protest against her decision to grant Telangana.

After all, cine stars like Chiranjeevi and Jayaprada and other politicians like NT Rama Rao (NTR) and YS Rajasekhara Reddy (YSR) too have temples in their honour. Till Sonia Gandhi came, the competition was between the erstwhile thespian NTR and YSR, with the latter’s temples and statues increasing by leaps and bounds after his death in 2009.

Shankar Rao, a Dalit leader, however is of the firm belief that his Sonia Gandhi temple is the gateway to his extended stay in the state politics. After all, he has the unprecedented record of moving a no-confidence motion against his own party chief minister in November last as he asserted that Kiran Kumar Reddy did not have the support of his own party and exhorted the other political parties in the state assembly to support his move.

Not surprisingly, he was not in the good books of his chief minister, who even filed a defamation suit against him for his loose talk against the former, and was targeted by fellow colleagues whose followers bashed him up during a public gathering. Notably, his candidature was seen as a prominent Dalit representation by his community which had no choice but to back him despite his hackle-raising attitude.

The final word is however from the BJP local brass which is dead against such temples. As a local party functionary puts it: “Who are these Congressmen cheating? Don’t they know that the Telangana people will never forget that more than 1000 lives were lost during the nearly four-year long agitation? If ever some such construction has to come up, it has to come up as a memorial in honour of the average Telangana youth and none else” they assert.

Strange but true. As a party which believes in the building of a Ram Temple, they for one, do not want a Rome temple, pun intended.