“Tell Sunil Mittal, you have to work with Raja”

“Hmm …tell Sunil Mittal, you have to work along with Raja for another five years” —A RAJA 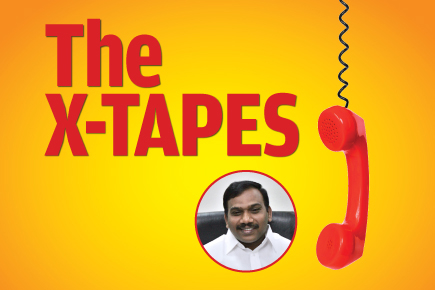 “Hmm …tell Sunil Mittal, you have to work along with Raja for another five years” —A RAJA


“Hmm …tell Sunil Mittal, you have to work along with Raja for another five years” —A RAJA

In this set of conversations, Raja has a message to be relayed to the chief of Bharti Airtel, even as Niira Radia appears to advise him to keep a distance from the chief of Reliance Communications, Anil Ambani, in the apparent interests of policy neutrality in the telecom sector

RADIA: Hi! I got a message from Barkha Dutt just now.

RAJA: What does she say?

RADIA: She says… that she has been following up the story with Prime Minister’s Office tonight. In fact, she was the one who told me that Sonia Gandhi went there. She says that he [the PM, presumably] has no problem with you, but he has a problem with Baalu.

RAJA: But it has to be discussed with Leader.

RADIA: Yeah, yeah… he has to discuss with the Leader. He has to tell…

RAJA: It will be discussed in the morning… why unnecessarily, Congress… tie-up is going out.

RADIA: No, but then the question is about Alagiri, no?

RADIA: Alagiri’s people are saying: why is Maran getting Cabinet when he is such a senior leader himself?

RAJA: That is different, but all these things must be explored and disclosed.

RAJA: At least, one to one, let it be disclosed to Leader.

RADIA: One to one?

RAJA: One to one. Somebody should give a message, at least in a sealed cover, that we are having serious problems [with] Baalu.

RADIA: Okay, I’ll tell her. She is talking to Ahmed Patel, so I will talk to him.

RAJA: Let him call at least over phone: Sir, this is problem… we are having high regard [sic], we are having no problem with Raja, but problem is Baalu. Tell.

RADIA: Then how will you resolve the other problem?

RAJA: Other problems we will take care of slowly, because now Leader comes down.

RADIA: Now Leader comes down to three, no?

RAJA: Comes down for three…

RAJA: Even you are saying that Maran is not fit for Infrastructure… he is having controversy… [sic] alright, let him be accommodated in the existing ministry… at least we will suggest.

RAJA: Hmm… you suggest, you send a message.

Some talk of Tamil politics and its influence of how political power-sharing is shaping up in New Delhi.

RADIA: “What they are saying is they will not give Infrastructure to Baalu and Maran. They should say that directly to Leader, no?”

RADIA: The thing is that the Congress has been totally confused as to who they need to speak to.

RADIA: Who they need to speak to in the DMK.

RAJA: Ah… somebody should fly to Leader.

RADIA: No, no… That is why, I am now… they’re going to speak to Kani in a little while, and then Kani is going to take them to Leader directly, and let Kani…

RADIA: Yeah? I have done… just told them that, because they’re completely confused who to talk to. Yeah?

RAJA: Let them talk to Kani.

RADIA: Yeah, but Kani should also be sensible enough to say that she does not want anything for herself. No? I have told her that…

RADIA: But you also make sure.

RAJA: See, tell Kani, let her call Leader—‘This is the problem, shall I bring the people?’

RADIA: Yeah, because what they’re saying is that they will not give Infrastructure to Baalu and Maran. They should say that to Leader directly, no?

RAJA: No problem. Look, see… let them go along with Kani, and let them tell that we are having problem with these fellows.

RADIA: That’s right. That’s what they have to do… they were confused. What happened is—for the UPA meeting, Maran went along. So they think Maran is the interlocutor, he is the person who’s going to talk, so there is this…

RAJA: Not at all. He came for assistance, that’s all

RADIA: No, I know, but you see this is a wrong message that has gone out, and they don’t know.

A discussion on perceptions of Raja’s capabilities, the DMK patriarch’s senility (as it seems), his son Alagiri’s attitude and other things of mind, and their implications.

A RAJA: “I know. So who planted in the minds of the Congress that Azhagiri doesn’t know English. I know”

RADIA: Raja, how are you?

RAJA: Haan. What she is telling, Kani is telling?

RADIA: She’s telling that she’s okay about it. She has no problem…

RADIA: But the only thing is that somebody has to go talk to Alagiri, which you have to do.

RADIA: And tell him how Maran has gone and told…

RADIA: You told him what he has told the Congress leaders in Delhi?

RAJA: I know. So who planted in the minds of the Congress saying that Alagiri doesn’t know English. I know.

RADIA: No, no, no, no…. not only that. Not only that. That he and Stalin tomorrow will be the only ones left to run the party because the old man is senile and he is not going to be around any longer, and therefore Congress will be happy doing business with him because it will be him… him eventually, and he controls Stalin.

RADIA: This is what he has said.

RADIA: And that Alagiri is criminal…

RADIA: And he has not even studied more than 5th standard.

RADIA: That’s the exact thing that he has told.

RADIA: You go and tell him this, no?

RAJA: No, I shared with Alagiri… Alagiri in turn went to speak with Leader.

RADIA: No, but he has also said this—that in Delhi, I am the only one that you have to deal with eventually because, any case, Stalin will remain in the state.

RAJA: I know, see, I know what type of propaganda he will manage.

In this phone conversation, Raja is keen to know from Niira Radia if his ‘case is clear’. She affirms as much, and advises him on being ‘neutral’.

NIIRA RADIA: “Yours is clear, yeah. Your case was cleared last night only”

RAJA: Tell me, Niira, anything?

RADIA: I sent you an SMS. I’ve been speaking to Kani, so I just thought that, basically what they are saying is that you should be there.

RADIA: Leader generally is saying that you should be there, because of the, you know, the Dalit dispensation, all that, you know. The Dravidian, the party, and all that… saying that Leader, if it was left to him, he would have focused on the party first. This is unfortunate that his family is coming in the way and Cho Ramaswamy [senior Tamil journalist] has given a favourable remark that it should be limited to this thing.

RADIA: But I’ve been talking to Kani, she spoke to me, she said, ‘No independent.’ They are not giving independent… just now.

RAJA: My case is clear, yes?

RADIA: Yours is clear, yeah. Your case was cleared last night only.

RADIA: No, but what is happening with Daya?

RAJA: Rest of the thing is… Textiles or Fertilisers.

RADIA: Not for Daya.

RAJA: Either of them.

RADIA: But Alagiri or Daya? Only one can come, no?

RAJA: Baalu will be the problem. I hope.

RADIA: I think that will be difficult for the Leader to justify three family members.

RAJA: That is it, that is… (chuckles) everybody knows.

RADIA: No, no, she said that. Kani told me this last night, that’s what the father told her yesterday.

RADIA: That for him to justify three family members will become very difficult. He recognises that problem.

RADIA: Yeah. I think he will have to relook at that. You’re all meeting him individually now? Or the meeting is still going on?

RADIA: Narayanan’s [MK, National Security Advisor at the time] meeting is going on?

RAJA: Narayanan’s meeting is over. He has gone to Delhi, with cover.

RAJA: He has gone to catch the flight… with cover.

RADIA: He has gone out with the list, no?

RAJA: I didn’t know what is inside the cover.

RADIA: And Kani? Is with father?

RADIA: I will call her now. And you are not there?

RAJA: I am not yet there.

RADIA: You’re not there? And Maran? Maran is there, no?

RADIA: Why you didn’t go?

RAJA: Alright… why should we go?

RADIA: You should be there, no?

Raja: No problem… morning I met, and thereafter I came back for another work.

RADIA: And Alagiri… he knows what Maran has been saying about him?

RAJA: It is known to Alagiri.

RAJA: It is known to Alagiri, but he cannot talk with father… timely [sic] he will speak, only thing is, Maran will start the campaign against me…

RAJA: That has to be taken care of.

RADIA: You have to fight differently.

RAJA: Hmm… he may tell the press Prime Minister is coming again, this and that, spectrum…

RADIA: No, no, we are handling, don’t worry. We have to take so much off, you know, even Congress had to make that statement, no? I spoke to Sunil Mittal, did Chandoliya tell you?

RADIA: I told him to stop. I told him, it doesn’t help.

RAJA: Hmm. Tell Sunil Mittal, you have to work along with Raja for another five years. So, don’t…

RAJA: Ah, that we can keep.