Sufis vs Deobandis in the Gandhi Stronghold 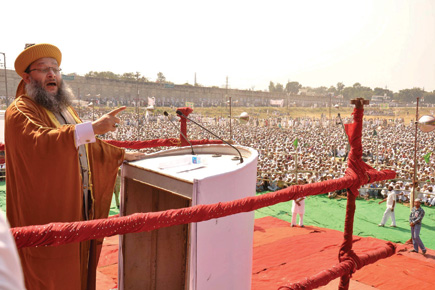 The Muslim vote in Uttar Pradesh has long been one of the great unpredictables of Indian electoral politics. It now seems to be entering a phase in which it is even harder to predict than usual. For, a theological debate at the locus of an old divide between Barelvis and Deobandis—India’s two largest sub-sects of Sunni Muslims—has not only undergone a loud revival of late, it has done so with an increasing sense of bitterness on either side.

Muslims account for about 19 per cent of the state’s electorate, and the political parties vying for their votes—Assembly polls are due next year—are watching with an acute sense of anxiety even as they try hard to look the other way. Those responsible for the verbal flare-up within the community are in no mood to restrict it to the theological plane; they are keen to make a political impact, having decided to stir things up in the Congress party’s nerve centre in UP, the Rai Bareli-Sultanpur-Pratapgarh region, a Gandhi family bastion.

On 16 October, the All India Ulama and Mashaikh Board (AIUMB), a representative body of the heads of Sufi dargahs and other shrines, held a Sufi Mahapanchayat in Moradabad at which it attacked adherents of the Deobandi school of Islam for saddling India with the alleged ‘threat of Wahhabi terror’. It sparked off a war of words.

Now the AIUMB wants to push the debate further by organising a series of conclaves along the same lines as the Moradabad one in various parts of UP. The first of these is to be held in Sultanpur in the last week of November. “In the next three-four months, we plan to hold large public meetings of Sunni Sufis [of which Barelvis are most numerous] in Sultanpur, Bareilly, Benaras and Bahraich. The Sultanpur one will be attended by people from Rai Bareli and Pratapgarh as well,” says AIUMB National Secretary and Spokesperson Syed Babar Ashraf, speaking to Open.

In matters of theology, the two sub-sects differ in their interpretation of Islam. Barelvis are comfortable with Sufi traditions that include popular modes of devotion at shrines such as dargahs, often arguing—if pressed—that this is a form of khidmat (devotional caretaking) in honour of saints at their burial sites. The spartan Deobandis, on the other hand, consider such practices an idolatrous form of ibaadat (worship) that deviates from the strict monotheism of Islam.

The relationship between the two sub-sects is all the more fractious in UP, where there have been instances of riots between them in the past. As it plays out beyond the realm of religion, it is a question of political sway. For quite some time, heads of dargahs and shrines—local Barelvi leaders—have been jostling with Deobandis to participate in the political representation of Muslims.

The AIUMB, which was formed in 2005, has addressed a few public meetings earlier too. But it caught nationwide attention only after it launched its verbal volley at Deobandis. Today, the Board claims to represent the ‘spiritual citadels of Islam’ in the country. The Moradabad Mahapanchayat was attended by representatives of almost all major Sufi shrines in north India, including Ajmer Sharif, Rudauli Sharif, Bareilly Sharif, Dargah Nizamuddin Aulia (Delhi), Kichhauchha Sharif (Faizabad), Khanquah Rashidia (Mainpuri), Khanquah Afzalia (Mainpuri), Khanquah Asdaqia (Nalanda, Bihar) and Khanquah Quddusia (Saharanpur).

The Board argues that despite Barelvis holding the loyalty of 80 per cent of India’s Sunni Muslims, they have not been able to assert themselves because “Deobandis and Wahhabis” have captured key Muslim institutions, including the Wakf Board and madrassas, and wield disproportionate political influence. “The time has come for us to emerge and claim our rights. Let us take a pledge that we will never support Wahhabi extremism—not today, not tomorrow,” AIUMB General Secretary Maulana Syed Muhammad Ashraf Kichhouchhawi told the gathering at Moradabad. What riled Deobandis was this remark of his: “Right now, madrassas are under the control of Wahhabi-inspired organisations that run on Saudi money. The ideology they teach and spread is hardline Wahhabism… We want to distinguish ourselves, keepers of harmonious Islam, from those who are promoters of terror.”

Speaking about a fortnight later to Open, Mufti Abul Qasim Nomani, rector of Darul Uloom in Deoband, dismisses the charges hurled by the AIUMB. “Deobandis have no connection with Wahhabis,” he says flatly, “Nor do we accept money from any government, whether Indian or Saudi Arabian. These are lies spread against an organisation that has played a stellar role in India’s freedom movement. Also, it is at Deoband in February 2008 that we had gathered Muslim ulema across all sects and issued a fatwa against terrorism. We pushed the message even more at state-level meetings we organised against terrorism. The baseless charges being levelled against us will only divide Muslims at a time when we should be fighting unitedly on various issues confronting us.”

The Barelvi upsurge against Deobandis, for all its theological underpinnings, has engulfed all contestants for UP’s Muslim vote. The party that finds itself in the most awkward position is the Congress, whose silken patchwork of arrangements with UP’s sub-sects is threatening to come apart. Though the AIUMB claims to be an apolitical body, it holds the Congress responsible for patronising Deobandis but keeping most Muslims in a state of backwardness. “The Congress listens to hardliners,” says Syed Babar Ashraf of the AIUMB, “It has propped up hardline organisations like the Jamiat Ulama-i-Hind and has patronised Deobandis at the cost of Barelvis.”

The Congress’ pre-1947 memories of Deoband’s anti-Partition stance are no longer relevant. What matters now is which way Muslims will vote, since the outcome of several Assembly seats would depend on it, and the AIUMB’s choice of Sultanpur for its rally is no coincidence. For decades together, UP’s Muslims tended to vote for the Congress. But in the early 1990s, Mulayam Singh Yadav’s tough posture against Hindu communalism saw his Samajwadi Party emerge as the outfit deemed most protective of Muslim interests. As a result, the Muslim vote was split between the SP and Congress, with the former getting the bigger chunk. This pattern stayed unbroken for almost two decades. In the Lok Sabha election of 2009, however, Mulayam stumbled in his appeal to Muslims. The state’s Barelvis in particular came out in open support of the Congress. This is said to have been one of the major factors in the Congress’ surprise showing in UP. The party won as many as 22 Lok Sabha seats in the state.

The bond forged in 2009 between the Congress and Barelvis, however, now appears to be under severe strain, with the sub-sect’s leaders expressing deep disappointment. “In the last Lok Sabha election, we had supported the Congress. But we have realised that the Congress’ intentions are not good. It has, for example, not yet set up a judicial enquiry into the Batla House encounter, despite repeated requests by secular people all over the country,” says Maulana Tauqeer Raza Khan, younger brother of Maulana Shubhani Raza Khan, chief cleric at Dargah-e-Ala Hazarat, a top Barelvi ‘citadel’. “We have, therefore, decided to disassociate ourselves from the Congress,” says Maulana Tauqeer, who is also the president of the political outfit Ittehad-e-Millat Council. “We are yet to take a final decision on the party we would back in the next Assembly elections, but many political parties are talking to us.” Though the reason that Maulana Tauqeer cites for distancing himself from the Congress is different from what the AIUMB has articulated, the underlying drift seems common to both.

And yet, the Congress is not the only party that finds itself in a spot. The raging Barelvi-Deobandi stand-off is also threatening to strip the Peace Party of its prospects in the upcoming polls. Over the past year or so, this new party has sprung to significance as a Muslim vote catcher. It recorded an impressive performance in byelections at Dumariaganj in June last year and Lakhimpur in November 2010. While the SP retained its Lakhimpur seat, the Peace Party—believed to have secured most Muslim votes—grabbed second place, pushing the BJP to third position, the Congress to fourth, and the BSP-supported candidate to fifth place. The Peace Party’s meteoric rise has got the state’s secular parties elbowing one another to forge an alliance with it for the 2012 polls.
But the Barelvi-Deobandi rift could ruin its chances. “Dr Mohammad Ayub (founder of the Peace Party) is a Deobandi who is trying to become a political force with the backing of Barelvis without giving them adequate representation in his party,” says Syed Babar Ashraf of the AIUMB. Incidentally, on 30 October, a section of the Peace Party broke away to form the Rashtriya Peace Party, accusing the parent outfit of playing into the hands of communal forces (the sectarian rift, say observers, may have played a role as well).

Though AIUMB leaders remain non-committal on which party they will finally support in 2012, indications suggest that any likely gains of their disaffection with the Congress would be easier for Mayawati’s Bahujan Samaj Party to capture than Mulayam’s SP.
Azam Khan, the Muslim face of the SP, had left many Barelvis miffed by a derogatory statement he made on a dargah in Roorkee about a decade ago. The AIUMB’s Syed Babar Ashraf goes to the extent of saying that he is one of the people “marked out” within the community.

Mayawati, on the other hand, has been trying hard to sway Barelvis away from the Congress ever since she saw the 2009 Lok Sabha results. And Barelvi leaders, on their part, have not been as critical of her as they have been of leaders of the Congress, SP and Peace Party.

Moreover, Mayawati is doing her utmost to revise the BSP’s much acclaimed social coalition—by replacing Brahmins with Muslims for an electoral alignment with Dalits, her ever-loyal voter base. According to BSP sources, this realignment is in response to clear signals that upper-caste Hindus will desert her party, come May 2012.

If Mayawati succeeds in her new formula, it would mark the realisation of a social coalition first envisioned long ago by Kanshi Ram, founder of the BSP. Bringing Muslims and Dalits together in a joint struggle against upper-caste domination was one of Kanshi Ram’s primary aims. Back in the 1970s, it was this idea that led him to form the Backward and Minority Communities Employees’ Federation (Bamcef), drawing equally upon Dalit and Muslim support in an agitational programme that became the launchpad of the BSP in 1984.

It is far from clear whether Mayawati can achieve what Kanshi Ram himself could not in his lifetime. What is obvious is that the Muslim vote in UP has no obvious claimant yet. In the interim, expect earlobes to stay turned towards the war of words between Barelvis and Deobandis. Sultanpur could send out signals that politicians would not like to miss.