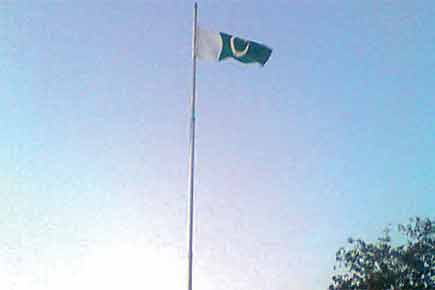 
BANGALORE ~ That the ruling Bharatiya Janata Party (BJP) in Karnataka is silently encouraging its affiliated outfits to don the role of cultural and moral police is well known. It’s also clear that the state government is not serious about taking action against those behind recent attacks on churches for alleged conversions, nor is the state in a hurry to file cases against activists for forcibly stopping trucks ferrying cattle to slaughter houses.

The government’s go-slow attitude has emboldened such outfits to run riot. But, a recent incident may bring them to heel as well as put pressure on the government to deal strictly with such outfits.

On 1 January, members of the Sri Ram Sene hoisted a Pakistani flag on a flagpost in a government office compound after bringing down the Tricolour in Sindagi town in north Karnataka, which has a sizeable Muslim majority. On that day, residents of Sindagi in Bijapur district woke up to a Pakistani flag fluttering in place of the Indian one at the taluka office compound’s flag mast. As news of the ‘desecration’ spread and the hand of Muslim fundamentalists was suggested, the town erupted in violence, which quickly spread to other towns nearby. Six state-owned buses and some private vehicles bore the brunt of mob violence. The flag was quickly brought down, and police teams tasked to trace the culprits.

“It was quite a task,” says Inspector-General of Police,Charan Reddy, responsible for bringing the Sene members to book. “It was a proper Pakistani flag with a white minority stripe. We are still investigating the case, as to where they got the flag stitched. There are others also involved in the conspiracy and we are trying trace them,’’ he says.

The police say the arrested students belong to the Sri Ram Sene, and had hatched the conspiracy earlier. After a celebratory drink on new year’s eve, they proceeded to the taluka office on motorcycles. After hoisting the flag, the Sene members went about spreading the rumour that this was the handiwork of some fundamentalists.

However, in a couple of days, the perpetrators were shortlisted, and the police announced that seven suspects had been arrested. The police worked on a clue, asking why a two-wheeler was found parked inside the taluka office premises between 3.30-4 am, as some witnesses said. When the motorcycle was traced, its owner and his friend claimed they were returning from a new year’s eve bash and saw two men without footwear inside the compound. Their story did not quite hold up, and they were brought in for questioning. This was when they spilt the beans.

They were all from the Sri Rama Sene, a fringe outfit led by Pramod Mutalik, which broke away from the Bajrang Dal a few years ago. The Sene has been in the news for all the wrong reasons, including an infamous attack on women pub-goers in the port city of Mangalore in January 2009. The group also vandalised an MF Husain exhibition in New Delhi, and took credit for attacking senior lawyer and Team Anna member Prashant Bhushan in his Supreme Court chamber in October last year. There have been several cases of documented attacks by their members on places of minority worship in Karnataka.

As news of the arrests spread, the Sangh outfits denounced the administration for victimising the Sene activists. Their reactions ranged from disbelief to yelps of ‘persecution’.

Now, a confirmation has come from the state home minister, R Ashoka, that it was indeed the Sene behind the attack. Ashoka did not say anything about regretting the incident or condoning it. He simply stuck to his brief that seven people were arrested, and congratulated himself and his government for taking “quick action before the situation got out of hand”. But there was no question of a ban yet on the Sri Ram Sene, he added.

Mutalik has maintained that the police were foisting false charges on the boys. He is also uncomfortable with being tagged as part of the ‘Hindu Taliban’, as alleged by the Congress and other secularists.

The flag incident raises many questions. To what extent can such rightwing outfits go? There are two cases already under investigation where their complicity is suspected—the Malegaon blasts in Maharashtra and Samjhauta Express blasts, in which Sadhvi Pragya and a serving Army intelligence officer, Lieutenant Colonel Srikant, are allegedly involved. The flag incident has raised new concerns and shown to what extent the Sangh outfits can go. A few weeks ago, Sadhvi Pragya’s photographs were found on a banner in Ullal, near Mangalore, portraying her as a youth icon. Police brought them down but failed to find who was responsible.

Equally perplexing is the silence of the Centre. Home Minister P Chidambaram had in 2008 noted that the Sene was under watch, but had ruled out a ban on it.

Mutalik and his band of boys have been consistently threatening to disrupt Valentine’s Day celebrations across the country, calling it a Western idea that has no place in Indian culture. One year, when the outfit warned couples that members would go around with priests and forcibly marry couples celebrating Valentine’s Day, netizens responded with a pink chaddi campaign on the net, with people collecting pink undergarments to be sent as gifts to Mutalik. The chapter ended with Sene men being taken under preventive custody.