Son of the Tiger Forest

A first generation Soliga post-graduate, C Made Gowda used research to secure his tribe’s future in its ancient home 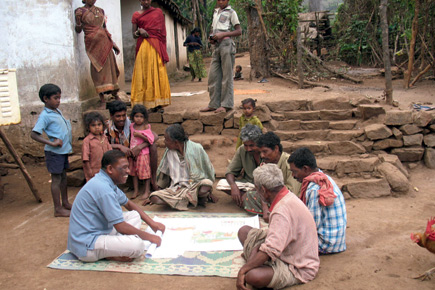 A first generation Soliga post-graduate, C Made Gowda used research to secure his tribe’s future in its ancient home


As we trek up a settlement at the foot of Seege Bettain BR Hills, C Made Gowda points to a patch of forest, one of his father’s many ploughing fields. In his younger days, Made Gowda’s father, Chikkananje Gowda practised shifting cultivation like many of his fellow Soligas.

Today, Made Gowda and his father live in a permanent Soliga settlement called Bangli Podu. From shrinking forests to changing lifestyles and from wildlife protection legislation that restricted them to forest rights legislation that enabled them, Soligas have seen a lot.

BR Hills is a new tiger reserve with a long history of tigers and people. Made Gowda recounts the Soliga origin lore—how the lord Biligiriranga (after whom the hills are named) fell for a Soliga beauty, Pusumale, when she was collecting genasu (tubers) in the forests. His father says, “We are forest people. My son may have gone to the naadu (plains or cities), but he cannot live there for long.”

Made Gowda holds a Master’s degree in social sciences. He has had the benefit of the forest lore and knowledge as well as modern education. “We are able to organise ourselves and talk about our rights today. Many of us hold degrees in social work, nursing, arts and science.”

Made Gowda works at the BR Hills field station of an NGO, Ashoka Trust for Research in Ecology and Environment (ATREE). He has been estimating the harvest of honey and amla from various podus (settlements). Such estimates allow forest managers to keep track of extraction. “The monitoring of NTFP [non-timber forest products] that I have been doing was also able to show that the extraction is sustainable,” he says. What this meant was that the presence of Soligas did not damage this tiger forest.

This was crucial because the authority wanted to resettle Soligas as per the standard practice of making a tiger reserve free of human habitation. “In 2010, our forests were declared a Tiger Reserve overnight. Nobody consulted us though we have lived with these animals for centuries. We opposed the announcement. But, it is the law and we now accept it. However, the Forest Rights Act came at the right time. Once we were given the rights over our lands, we felt more secure,” recalls Made Gowda, who, along with other tribal youth and leaders of Soliga Sanghas, immediately swung into action.

They organised meetings at all podus on forest rights. With the support of local NGOs, they used every opportunity to represent their case to the political and administrative establishment. The consultations bore fruit. So far, 1,516 Soliga households have received rights to their land and 32 podus (settlements) have received community rights.

The Soliga tribe is first mentioned around 1800s by the Scottish traveller-physician Francis Buchanan-Hamilton who described them as “somewhat shy” and not prone to hunting. Made Gowda agrees: “In the 1980s they told us to stop shifting cultivation and asked us to settle down in specific areas that they identified and we accepted. Then they said hunting is illegal and we stopped”.

In the early 1980s, H Sudarshan, a medical doctor, founded Vivekananda Girijana Kalyana Kendra (VGKK) and Made Gowda joined the school VGKK started. “VGKK teachers and social workers used to go house to house convincing children to come to school,” he recalls. “Gradually, with the help and support of ATREE and VGKK, we organised ourselves into Soliga Abhivruddhi Sanghas (Soliga Welfare Associations).”

Under Made Gowda’s leadership, Soliga Sangha members are shaping a community-based tiger conservation plan. “Today, many of us are educated and we feel we can play a role. A year ago, we met with several scientists and experts to develop the plan. Over the past year, Soliga youth have carried the plan to each and every settlement in the Tiger Reserve. We have presented it at gram sabhas and taken feedback from all Soliga members. We will now hold another workshop where we will present this to the forest department, scientists and others.”

But Made Gowda stays attached to his roots. In 2011, he completed the documentation of over 400 locations in the forests including sacred groves, which are of cultural significance to his people. “We worship tigers and several other animals as gods. There hasn’t been a single incident of conflict with tigers and Soligas or hunting here,” Made Gowda claims proudly. “Yes, we understand that our dependency on the forest has to reduce. But it cannot be brought down to zero overnight with legislation. It must happen gradually, by involving us and providing us with alternatives. Besides, the knowledge we’ve gained first hand by living here for centuries can be very useful in conservation.”