The alliance between Nitish Kumar and Lalu Prasad is beset with contradictions. The anti-BJP camp in Bihar is hoping against hope that it will survive 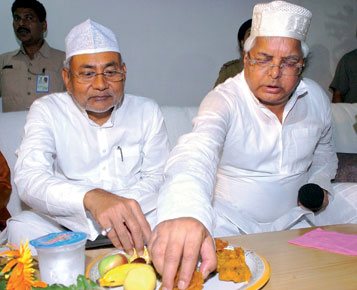 The alliance between Nitish Kumar and Lalu Prasad is beset with contradictions. The anti-BJP camp in Bihar is hoping against hope that it will survive

On 30 July, three of Bihar’s senior political leaders came together for a media briefing in Patna. Basistha Narayan Singh, president of the JD-U, Ramchandra Purbey, president of the RJD, and Ashok Choudhary, president of the Congress party, put up a perfect show of solidarity for the media. An alliance had been sealed, they declared. Likeminded parties, they said, had come together to block the rise of the BJP.

But behind all that posturing, there was a sense of unease and uncertainty. The top leaders of the three allies were not present for the grand announcement. While this may be understandable for the Congress, which is an all-India party, the JD-U’s Nitish Kumar and RJD’s Lalu Prasad were notably absent. The former, who was the state’s Chief Minister till recently, had returned to Patna the night before after a visit to Mumbai and Delhi; Lalu Prasad, who had gone to Delhi for Congress President Sonia Gandhi’s Iftaar Party on 27 July, was still in the national capital.

Lalu Prasad and Nitish Kumar had snapped ties back in 1994 when the latter floated the Samata Party, which later became Janata Dal-United and vowed to fight the ‘Jungle Raj’ of Lalu Prasad, the then Chief Minister of Bihar. Since then, the politics of Nitish Kumar has largely revolved around uniting non- Yadav Backward votes against Lalu Prasad. All these years, he has successfully drafted the anger against Lalu’s rule (read Yadav Rule) to his benefit. No doubt, the BJP also played a key role in his rise to power by backing his development agenda. “The combination of Nitish Kumar and [BJP’s] Sushil Kumar Modi was a formidable one which worked positively for Bihar. Both the leaders focused on development, sidelining the biases of their own party men,” says Alakh N Sharma, Director, Institute for Human Development.

With his mantra of ‘sushasan’ (good governance), Nitish Kumar thus emerged as a face of the ‘New Bihar’, and the state’s electorate voted him back in the 2010 Assembly polls. The big mistake he made, however, was to take this victory as his own—and he ended up parting ways with the BJP last June. His former ally’s resounding victory in this summer’s General Election—across the country and especially in Bihar— has raised a question about his survival in politics.

After severing ties with the BJP, Nitish Kumar appears to have lost his halo in the state. The Lok Sabha election dashed his dream of pulling in minority votes thanks to his opposition to Narendra Modi while also winning over his traditional vote base of non- Yadav OBCs and Mahadalits. The JD-U won only two seats in Parliament. “This election completely went against the calculations of all those who were sure to win on caste and community,” says Union Minister and LJP leader Ram Vilas Paswan.

Lalu Prasad, who was sure of making a comeback this time round on an anti-BJP plank, had his expectations crushed as well. His party did only a little better than Nitish Kumar’s, securing only four seats.

Over the years, both leaders have seen their star appeal dimming. In the case of Lalu Prasad, it touched a new low after he was barred from contesting elections by a new law designed to keep law breakers from turning law makers. He couldn’t even secure a win for his daughter Misa Bharti in Patliputra, a Yadav-dominant seat, where his one-time aide Ram Kripal Yadav defeated her by over 40,000 votes.

More than anything else, this alliance is a sign of desperation at a time when the BJP’s prospects are high. “It was the need of the hour. Things which were relevant yesterday are not so today, and those of today will not be so tomorrow. There is no question of Jungle Raj and sushasan coming together. The alliance is to [prevent a division] of anti-BJP votes,” says Bashisht Narayan Singh. Both RJD and JD-U are trying to turn the political clock of Bihar back to social justice and secularism, away from the governance formula pursued by Bihar for eight years under Nitish Kumar. In the early 1990s, it was a platform that helped the two oust the Congress, turning it irrelevant in the state. This time, they hope to take on the BJP with it.

Many observers doubt whether this new formation can really challenge the BJP. “This is an abnormal alliance. Both Lalu and Nitish have been fighting on the streets for the last several years,” says Sanjay Kumar of Centre for the Study of Developing Societies. “They are just trying to experiment with this idea and see how voters react to it.”

Upendra Kushwaha, Union minister of state and leader of the Rashtriya Lok Samata Party, terms the alliance a failure before it was even struck. “Two zeros can’t become hundred; they will only remain zeros,” he scoffs, “It is not a battle of people. It has become a battle of egos with Nitish trying to prove that his ego is above all.”

However, on paper, the argument put forth by the parties does make the formation look formidable. In the recent Lok Sabha polls, the RJD got 20.1 per cent of the state’s votes, while JD-U got 15.8 per cent. Together with the Congress vote share of 8.4 per cent, that totals 44.3 per cent, which is far higher than the NDA’s 38.8 per cent in Bihar.

The arithmetic can be broken down group by group as well. In the Lok Sabha polls, the state’s Muslim votes, 16 per cent of the total, got split between the JD-U and RJD. As allies, the two parties expect to consolidate that support. Also, Muslims and Yadavs account for 30 per cent of Bihar’s electorate. Apart from that, the alliance could count on Mahadalits (11 per cent), Nitish Kumar’s caste group of Kurmis (3 per cent), and a chunk of Most Backward Classes (22 per cent): all this adds up to well over 44 per cent. Going by this calculation, the alliance may appear poised for power after the next polls.

But ground realities have a way of making a mockery of such pie charts and numbers. “Even if the two leaders have formed an alliance, it is very difficult for core supporters of the two parties, Yadavs and Kurmis, to come together,” says Sanjay Kumar, “They have been fighting not only an electoral battle but also a social battle all these years.” For both Lalu and Nitish, the challenge would be to transfer their votes to each other’s kitty in various constituencies marked out by their seat-sharing arrangement. It may not be easy.

Also, “Over the years, the role of caste has declined in Bihar if not been completely wiped out,” says Alakh N Sharma. “About 60 per cent of the youth of rural Bihar migrate every year. This has changed a lot in the thinking of new India, which prefers prosperity and growth over caste ridden politics. Any political formation based exclusively on a caste combination would not be as effective as it used to be in the 90s.”

Sharma is right. Bihar has almost 13 Lok Sabha seats where Muslims and Yadavs together are in a decisive position. Despite this, Lalu Prasad lost most of them, as young Yadavs opted for the Modi-led BJP instead. The trends among other caste groups—say, OBCs and Mahadalits—are similar. “Dalits today don’t eat for hunger, but for taste. They have grown up and they too have aspirations beyond Roti, Kapda aur Makaan. Modi showed the promise to fulfil their aspirations,” says Chandrabhan Prasad, a noted Dalit ideologue.

Good governance, something which Nitish Kumar identified himself with for eight years, was all of a sudden the poll mantra of the BJP, and the former Chief Minister simply let it go. After his Lok Sabha debacle, he asked Jitan Ram Manjhi, a Mahadalit, to take his place as Chief Minister, a move meant to display his ‘commitment’ to the community. According to experts, the new political development has affected the economic growth of the state, which had been in double-digits year after year. Even the real estate boom has begun to flag over the past year or so. Mall projects are on hold. Law-and-order has deteriorated, reminding locals of the RJD period. All this means that those who voted for Nitish Kumar in the Assembly and for Modi in the Lok Sabha polls—an estimated 15 per cent of the state’s voters —are likely to stick with the BJP.

The new partners will also face trouble trying to keep their flock together. While Lalu Prasad has little to worry about on this count, Nitish Kumar has to deal with restless party leaders. In the recent Rajya Sabha elections, some party rebels voted for independent candidates in defiance of a JD-U whip. Some have already switched to the NDA, or are in touch with BJP, LJP and RLSP leaders. On 31 July, JD-U MLA Rajib Ranjan wrote a letter to the party state president opposing its alliance with the RJD. He is trying to secure the opposition of others in the party too.

The fate of the alliance may depend on the results of the Assembly bypolls scheduled on 21 August. “If this combination wins five or more out of 10 Assembly seats, then it has a future though a tough one,” says Sanjay Kumar. Even JD-U rebels are waiting till 25 August, when the results will be announced. If it fails, the JD-U may split, with the breakaway faction moving to the NDA.

All things considered, for the time being, it makes sense for both Nitish Kumar and Lalu Prasad to stay behind the scenes.