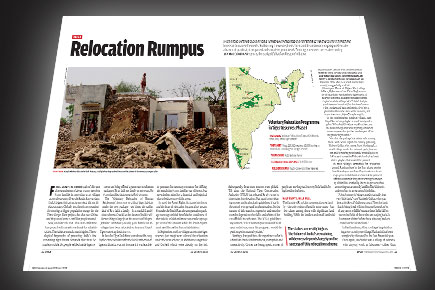 
Setting out to rehabilitate some 40,000 families from core tiger forests in 2008, the government has finally drawn some sobering ground lessons. The deadline set by the Ministry of Environment and Forests (MoEF) for public feedback to its draft guidelines for relocation expired this week. While the feedback may alter the final shape of the guidelines, the draft is a welcome step towards vital course correction in the latest round of the relocation process that began in 2008. But there are a few disappointments as well.

An investigation by Open (Relocation Rumpus, 28 May, 2010) flagged the key issues that were plaguing the process of relocation on the ground. The new draft guidelines have corrected a few of those anomalies. For example, the one-compensation-fits-all approach has been corrected and a key gender issue has been looked into.

The Centre had increased the relocation budget from Rs 1 lakh to Rs 10 lakh per family in February 2008, either payable fully in cash or as a cash-and-rehab option. But neither option took into account the actual assets owned by a family. Even in forest villages, where relative landholding may not be a major issue, assets of individual families vary. Some may own more trees, or a well, or just bigger hutments.

In revenue villages, the Rs 10-lakh package may appeal to small landholders (whose plots are worth much less) but not to big landholders. Also, a blanket provision of providing 2 hectare of agricultural land to every family after relocation (in the cash-and-rehab option) did not factor in how much land a family actually surrendered. As a result, with big asset/landholders refusing to budge, villages were being only partially relocated, defeating the very purpose of the scheme.

To fix these irrationalities, the draft guidelines are open to compensating villagers in proportion to their assets as per valuation done by the district Collector. If funds are left over after compensating all eligible beneficiaries, it will be distributed equally among them (in all-cash option) or be utilized for building community facilities (in cash-and-rehab option). If there is a shortfall, as is likely under the cash-and-rehab option that earmarks only 30 per cent of the Rs 10 lakh/per family budget for cash component, the state government will bear the additional cost.

However, the draft does not specify who will pick up the tab in case of a similar shortfall under the cash-only option. Also, there is no benchmark for a basic minimum compensation payable to landless families who live and work on other’s plots.

Relocation also has serious gender implications. Till now, the impact of handing out lakhs of rupees to poor villagers was proving to be destructive. In many cases, it led to abandonment of the spouse or even family, including minor children and unmarried daughters or sisters. In some cases, they were simply rendered homeless as the men surrendered their property for cash and rode away in new motorbikes, looking for young brides and a new life in nearby townships. So the proposal now is to deposit the compensation in joint accounts held by both spouses. Moreover, the money earmarked for buying alternative land will be paid directly to the seller, ensuring that the sum is not squandered.

However, the draft guidelines forget the unmarried women. A ministry note on 21 February 2008 said that “unmarried daughter/sister more than 18 years of age” was eligible for compensation. Within a month, it issued another order (apparently at the instruction of the Finance ministry), defining ‘the family’ as per the National Rehabilitation and Resettlement Policy, 2007.

But a policy meant for project-affected people may not apply to those who are forfeiting their right over property through an MoU, a voluntary deal. Since sons and daughters have equal inheritance rights, the consent (and, therefore, eligibility for compensation) of only the men in the family may not be legally tenable.

Then, there is the issue of forest rights. On a legally sound note, the draft says that no relocation will be carried out before the rights of villagers inside forests have been settled under the Forest Rights Act (FRA), 2006. On paper, it is in sync with the demand of many rights activists. But on ground, it may pose two challenges.

The process of settlement of rights under the FRA has been very slow in most states and its implementation does not depend solely on the forest department. In many places, the forest administration may have to wait indefinitely for the FRA process to get over while critical forest stretches will continue to suffer.

Moreover, to be eligible for the FRA, the non-tribal must furnish proof of residency over 75 years prior to 2005. Since very few have such records, the process of settling the non-tribal’s rights is either a non-starter or plain hostile (if they are denied rights). In many forests, such as Buxa tiger reserve, non-tribal communities do not want settlement under the FRA (fearing exclusion) and are keen to move out immediately under the voluntary relocation scheme.

Room for procedural flexibility in such cases can accelerate the relocation process and benefit both conservation and the people.